Islamophobia prompts Muslims to engage in US democracy: report

Anti-Muslim measures have backfired, causing the US Muslim population to protest and run for office in higher numbers. 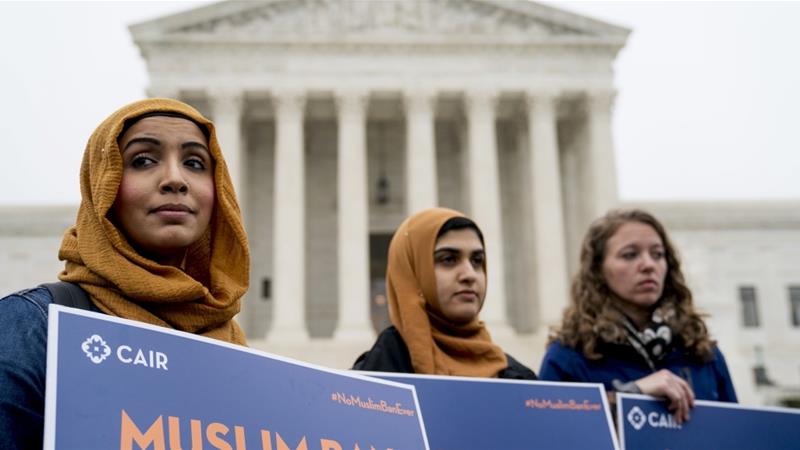 Washington, DC – American Muslims reported a higher number of incidents of discrimination this past year than any other religious group, but growing Islamophobia has pushed them to become more politically engaged, according to Muslim leaders, pollsters and activists.

The third annual poll published this week by the Institute for Social Policy and Understanding (ISPU), a think-tank based in Washington, DC, and Michigan, found that hate crimes against Muslims increased to an unprecedented level during Donald Trump’s presidential campaign and following his election in late 2016.

Measuring the level of anti-Muslim sentiment in the US through its first-ever national Islamophobia Index, the survey, titled Pride and Prejudice, showed that while Muslims only comprise one percent of the population, their community occupies an outsized role in the American popular psyche.

The poll of approximately 2,500 Americans from different faiths debunked some of the most incendiary and widely believed tropes about American Muslims, such as their responsibility for most “terrorist” attacks in the US – the majority of which are carried out by white supremacists.

One of the ways of pushing back against Islamophobia, US Muslims have found, is becoming more politically active and engage in electoral politics to change what they see as a biased shift in their country.

“The bright side of all of this is that over the past several years Muslims have climbed steadily in the percentage that report being registered to vote,” said Dalia Mogahed, ISPU’s director of research and former adviser on Muslim affairs during the Barack Obama administration.

“While things have gotten a lot harder, the response in many cases is greater engagement, not isolation … Muslims are less satisfied with the direction of the country but they are more politically engaged.”

The poll found that almost 75 percent of Muslims said they were registered to vote, an increase of seven percentage points over last year’s numbers. That reflects a steady increase, as the last tally itself was eight percentage points higher than the 2016 mark, the report said.

More than 90 American Muslims, nearly all of them Democrats, are running for public office across the country this year, an unprecedented number that marks an exceptional rise for a diverse group that typically has been underrepresented in American politics.

“We are experiencing – for the first time – the level of discrimination that we would talk about for a decade as a community,” Hamza Khan, a Democratic candidate for state delegate in Maryland and director of the Pluralism Project, a hybrid Political Action Committee (PAC) established in 2017 to support Muslim and other progressive candidates.

“Now that we are physically experiencing the after-effects of not participating in democracy, people are realising that the only way to protect themselves is to be a part of democracy,” Khan said.

The Pluralism Project is supporting various candidates across the US, including Rashida Tlaib, a Michigan Democrat, who in 2008 became the first Muslim woman to be elected as state representative.

Now, she is coming for the seat of Michigan Congressman John Conyers Jr, who, following sexual harassment allegations, retired in 2017 after serving for more than 50 years.

If elected, Tlaib would be the first Muslim woman in Congress. But it will be a steep battle since she is running against about a dozen other contenders, including the former congressman’s son and nephew.

Other Muslim candidates participating in various elections across the country – for posts at city councils, gubernatorial seats and everything in between – include former Obama administration officials and longtime political activists, but also a diverse array of doctors, lawyers and business people.

But the struggles of running while Muslim are evident in the smear campaigns, outright hostility and even death threats that some candidates are subjected to. A case in point is the gubernatorial race in Michigan where physician Abdul El-Sayed has proudly displayed his religion in campaign ads.

Last week, El-Sayed was the subject of a smear campaign by a Republican contender who claimed he had ties to the Muslim Brotherhood and accused him of plotting to engage in “civilisation jihad”.

Regina Mustafa, a Democrat from Rochester, Minnesota, withdrew from a congressional race in October after she received death threats and hate mail. Zainab Baloch, who ran for a seat at the city council of Raleigh, North Carolina, had a swastika, an ethnic slur and “Trump” sprayed on a campaign sign of hers.

There has never been a Muslim governor or senator in the country’s history, but there are two Muslims currently serving in Congress: Keith Ellison of Minnesota and Andre Carson of Indiana, both Democrats.

Change could still come about with Tlaib and two other candidates – Nadia Hashimi, 40, of Maryland; and Fayrouz Saad, 34, of Michigan – running for the House, while Deedra Abboud, 46, of Arizona, or Jesse Sbaih, 42, of Nevada, could be the first Muslim senator.

Often accused of having an innate propensity for violence, Muslims are more likely to reject violence than the general public, the ISPU survey found.

It also showed that Muslim Americans are, in fact, devoted citizens: despite feeling stigmatised, most identify strongly with America and express pride and happiness in their faith identity.

It also cited a 2017 Georgia State University study, which took into account target type, fatalities and whether or not the perpetrator was arrested, and discovered that attacks by Muslims received 357 percent “more coverage than other attacks”.

The report detailed portrayals of those representing Islam in films and television as overwhelmingly being that of fighters, while protagonists representing other faith groups were shown as religious leaders.

However, animus towards Muslims in the US is not explained solely by mainstream media or Hollywood’s skewed representation, observers say, but that it is also elected officials and legislation that have asserted Islam as intrinsically tied to “terrorism”.

“In terms of the dangers of today, it’s not just President Trump – he sets the message,” said John Esposito, professor of religion, international affairs and Islamic studies at Georgetown University.

Trump has narrowed the people with whom he interacts, noted Esposito, who also directs Georgetown’s Bridge Initiative, a multiyear research project on Islamophobia that collaborated with the ISPU on the study.

“Look at the sea of people [around Trump]: the first national security adviser, [Michael] Flynn, the current adviser, [John] Bolton, [Mike] Pompeo … Jeff Sessions [and others],” Esposito said, referring to some of the president’s past and more recent appointees, who have been accused of bigotry and espousing anti-Muslim sentiment.

Flynn once called Islam a “vicious cancer”; Bolton had chaired an anti-Muslim think-tank; Pompeo, who was confirmed as secretary of state last week, received the highest honour by ACT for America, a “counter-jihad” group presided over by Brigitte Gabriel, while Sessions slammed Islam as a “toxic ideology”.

But these anti-Muslim views permeating in Washington, the ISPU study found, are backfiring, pushing more Muslims into public life. In states like Maryland, where Khan is running, more Muslims are becoming engaged, with partial thanks to the Trump administration.

“We’re seeing Muslims taking a more active role in politics this year, particularly in Maryland – which I think has the largest number of Muslims running right now,” Khan said.

“The Trump administration has just done a fantastic job at galvanising everyday Americans to care about democracy mostly because they are horrified of what happens when you don’t pay attention.”