India’s health system is collapsing as Covid-19 spreads faster than ever, gravediggers burn piles of victims to keep up and crematorium furnaces MELT due to round-the-clock use

India’s health system is collapsing under the fastest spreading coronavirus surge since the pandemic started.

Another 259,170 cases were recorded on Tuesday, the world’s highest daily rate, and 1,761 deaths, the country’s highest ever daily toll, after a new variant of Covid emerged which scientists fear could partly evade vaccines.

The British government added the country to its ‘red list’ on Monday but was accused of acting weeks too late as more than 100 people in the UK have now tested positive for this Indian variant since the end of March, while some 900 people have been arriving on flights from India every day.

Delhi imposed a week-long lockdown last night as ambulances catapulted from one hospital to another, trying to find an empty bed.

The city of 29 million people has fewer than 100 beds with ventilators, and fewer than 150 beds available for patients needing critical care.

In the western state of Gujarat, many crematoria in Surat, Rajkot, Jamnagar and Ahmedabad are operating around the clock with three to four times more bodies than normal.

The chimney of one electric furnace in Ahmedabad cracked and collapsed after being in constant use for up to 20 hours every day for the past two weeks.

The iron frames inside another in the industrial diamond hub of Surat melted because there was no time to let the furnaces cool. 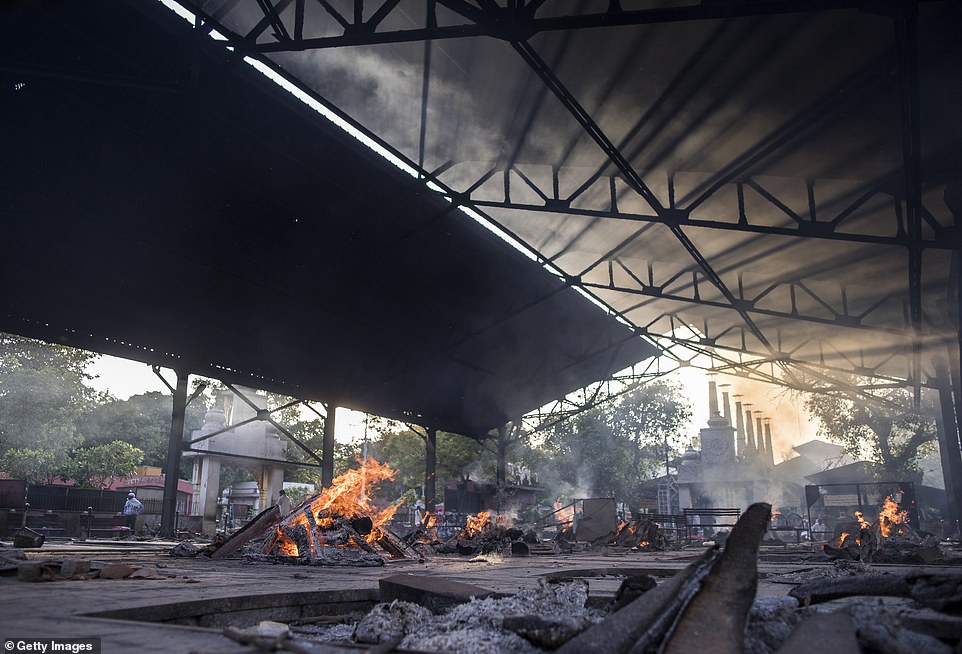 Burning pyres of patients who died of Covid-19 at a crematorium in Delhi over the weekend. The city of 29 million people has fewer than 100 beds with ventilators, and fewer than 150 beds available for patients needing critical care. 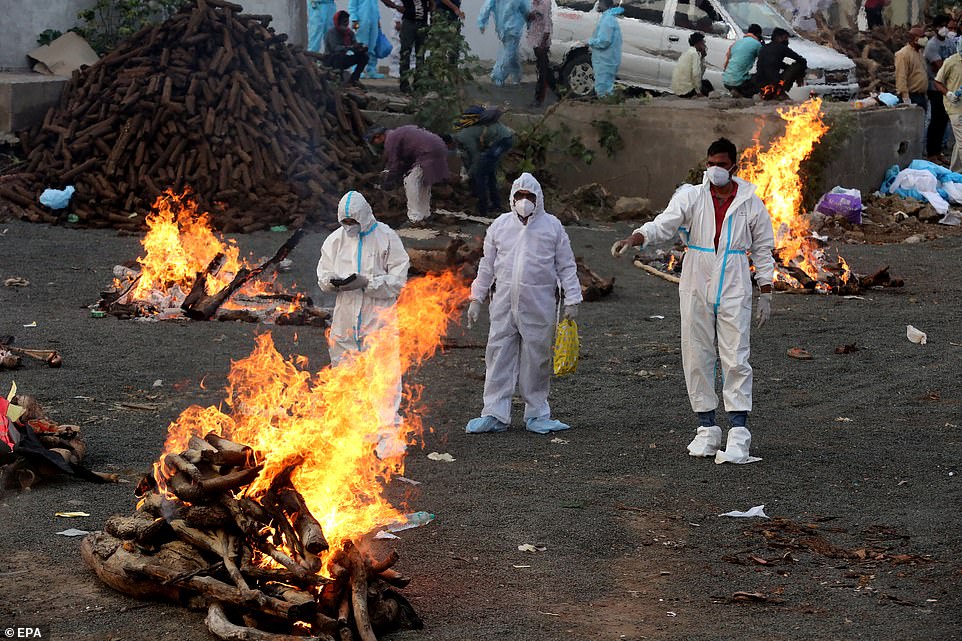 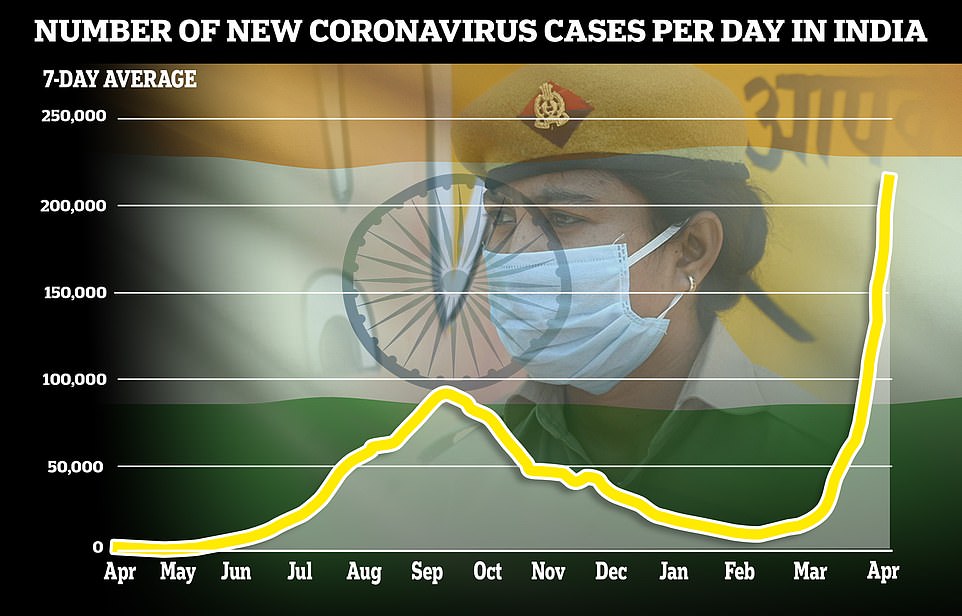 More than 200,000 cases per day were recorded on average in the last week, 20 times as many as two months ago, as a new variant of Covid-19 emerged which scientists fear could partly evade vaccines 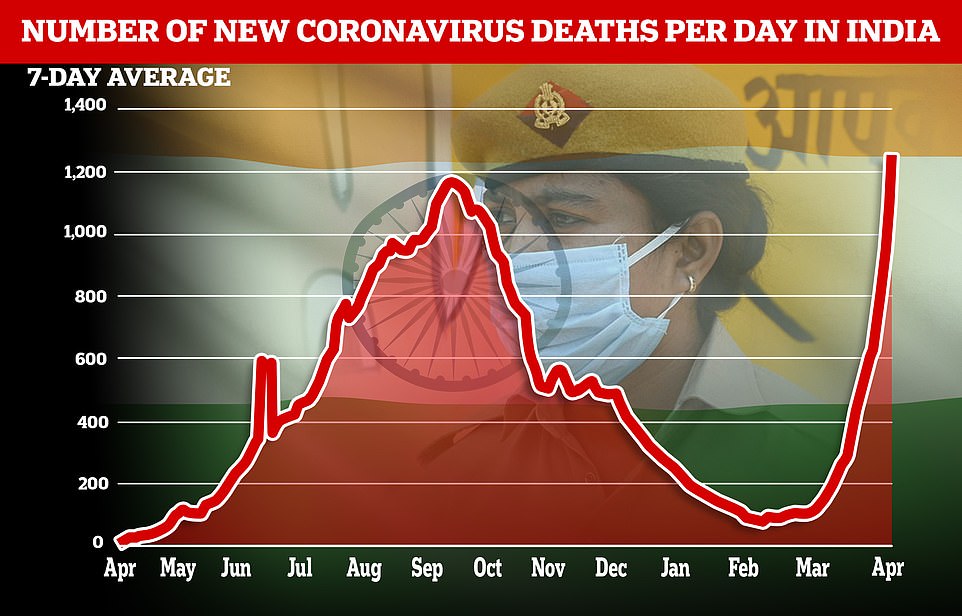 An average of 1,247 deaths were recorded over the last seven days, though India’s figures on Covid fatalities are believed to be vastly under-reported

‘Until last month we were cremating 20-odd bodies per day… But since the beginning of April we have been handling over 80 bodies every day,’ said a local official at the Ramnath Ghela Crematorium in the city.

With waiting times of up to eight hours, Rajkot has set up a dedicated 24/7 control room to manage the flow in the city’s four crematoria.

At two crematoria in Lucknow in the north, relatives are being given numbered tokens and made to wait for up to 12 hours. One has started burning bodies in an adjacent park.

Some crematoria in Lucknow ran out of wood and asked people to bring it themselves. Viral photos on social media showed electric rickshaws laden down with logs.

The rising death toll has also increased the grim workload for gravediggers dramatically in the last few weeks.

When AFP visited the Jadid Qabristan Ahle cemetery in the Indian capital – which is now in a week-long lockdown – on Friday, 11 bodies arrived within three hours.

By sunset, 20 bodies were in the ground. This compares to some days in December and January, when his earthmoving machine stayed idle and when many thought the pandemic was over.

‘Now, it looks like the virus has legs,’ said Shamim, 38, a gravedigger like his father and grandfather. ‘At this rate, I will run out of space in three or four days.’

Around the graveyard, white body bags or coffins made out of cheap wood are carried around by people in blue or yellow protective suits and lowered into graves.

Just months after India thought it had seen the worst of the pandemic, the virus is now spreading at a rate faster than at any other time, said Bhramar Mukherjee, a biostatistician at the University of Michigan who has been tracking infections in India.

As it battles the rising cases, India announced Monday that it would vaccinate everyone older than 18 from May 1.

The country began inoculating health workers in mid-January and later extended the drive to people over 45. India has so far administered 120 million doses to its population of nearly 1.4 billion.

The country reported over 270,000 infections on Monday, its highest daily rise since the pandemic started.

It has now recorded more than 15 million infections and more than 178,000 deaths. Experts agree that even these figures are likely under-reported.

Amid the rise in cases, Boris Johnson called off a trip to Delhi to hold post-Brexit trade talks with Narendra Modhi. 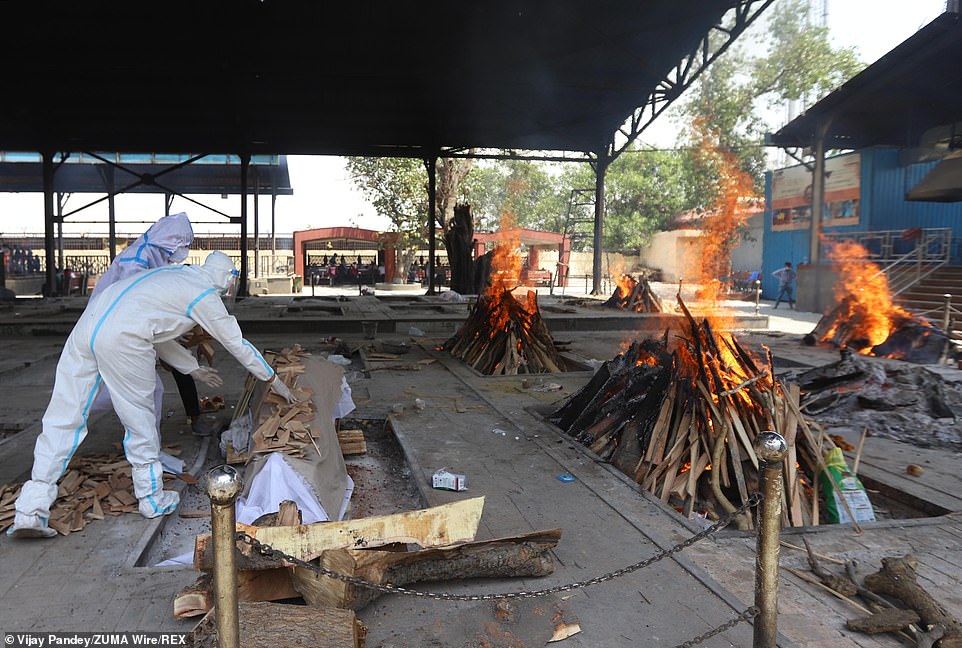 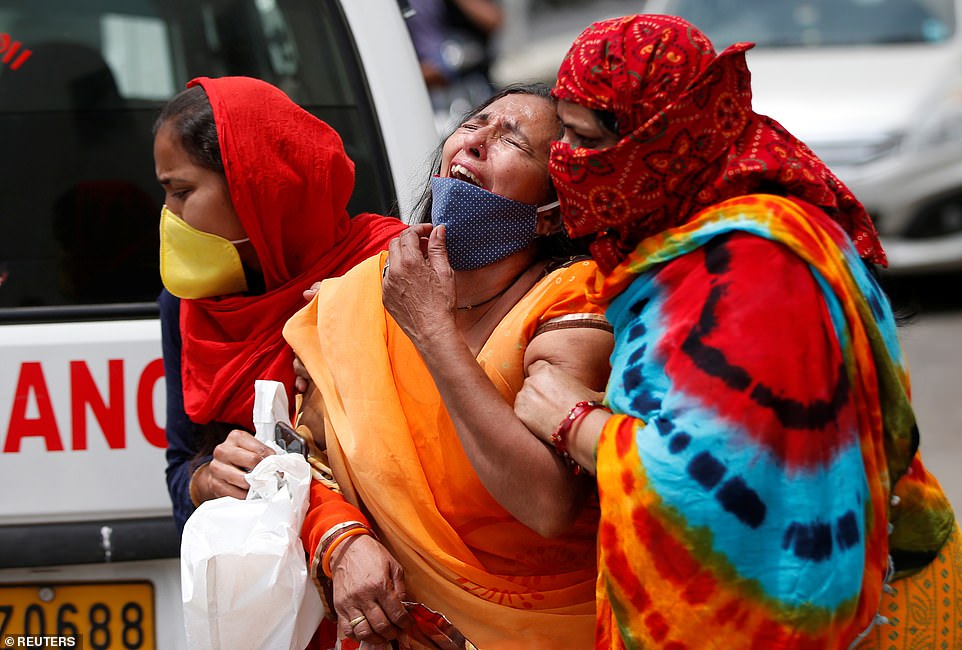 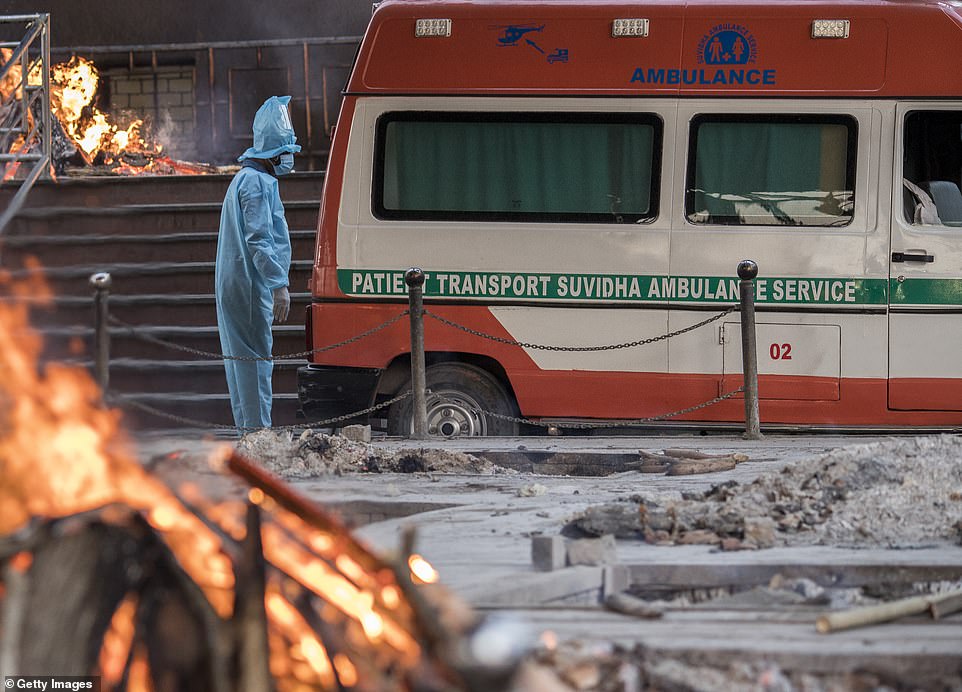 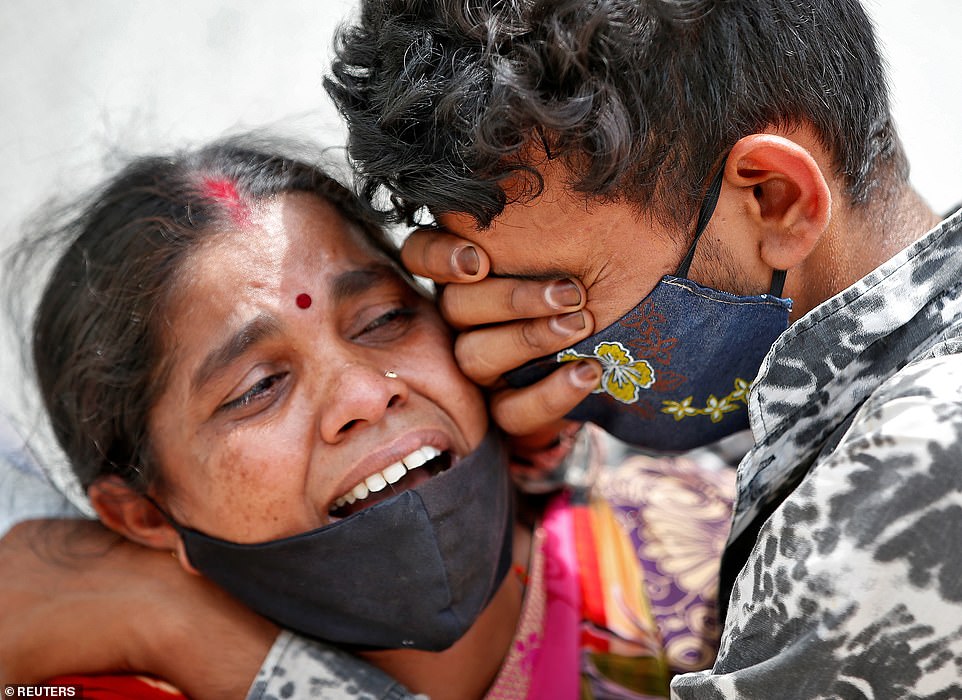 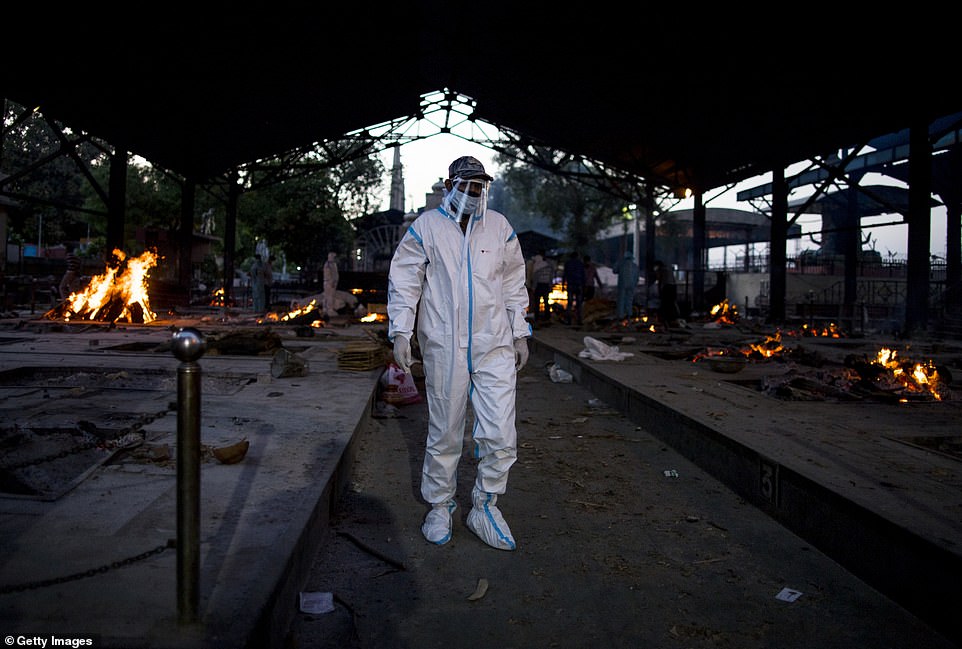 As well as Delhi, the country’s healthcare infrastructure is being tested across the land, including in the remote Himalayan region.

In Indian-controlled Jammu and Kashmir, the weekly average of Covid 19 cases has increased 11-fold in the past month.

In Telengana state in southern India, home to Hyderabad city where most of India’s vaccine makers are based, the weekly average of infections has increased 16-fold in the past month.

Meanwhile, election campaigns are continuing in West Bengal state in eastern India, amid an alarming increase there as well, and experts fear that crowded rallies could fuel the spread of the virus.

Top leaders of the ruling Bhartiya Janta Party, including Prime Minister Narendra Modi, have campaigned heavily to win polls in the region.

By contrast, in Delhi, officials have begun to impose stringent measures again.

The Indian capital was shut down over the weekend, but now authorities are extending that for a week: all shops and factories will close, except for those that provide essential services, like grocery stores. People are not supposed to leave their homes, except for a handful of reasons, like seeking medical care. 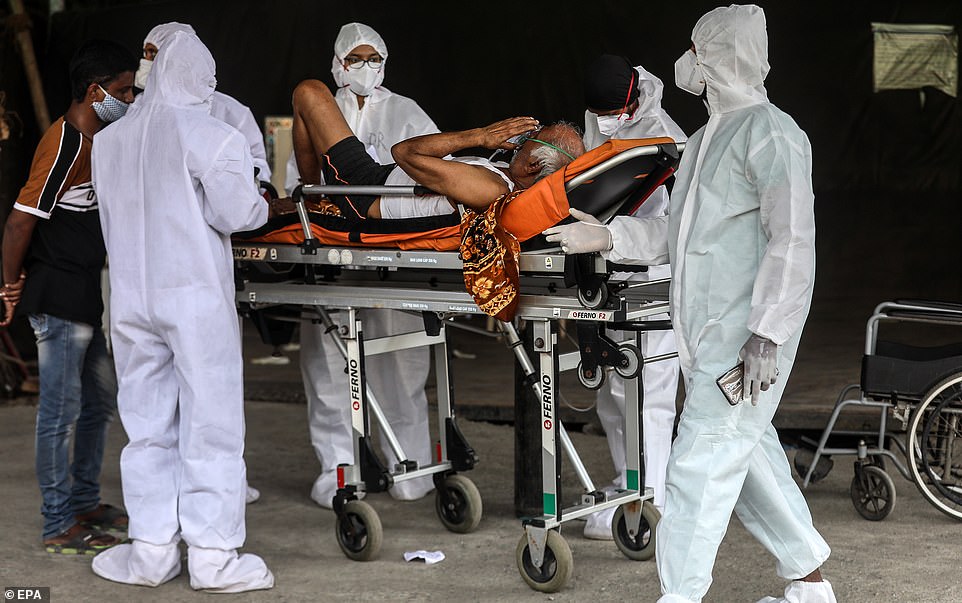 They will be allowed to travel to airports or train stations – a difference from the last lockdown when thousands of migrant workers were forced to walk to their home villages.

That harsh lockdown last year, which lasted months, left deep scars. Politicians have since been reticent to even mention the word. When similar measures were imposed in Mahrashtra state, home to the financial capital of Mumbai, in recent days, officials refused to call it a lockdown. Those restrictions are to last 15 days.

Kejriwal, the Delhi official, urged calm, especially among migrant workers who particularly suffered during the previous shutdown, saying this one would be ‘small.’

But many feared it would spell economic ruin. Amrit Tripathi, a laborer in New Delhi, was among the thousands who walked home in last year’s lockdown.

‘We will starve,’ he said, if the current measures are extended. 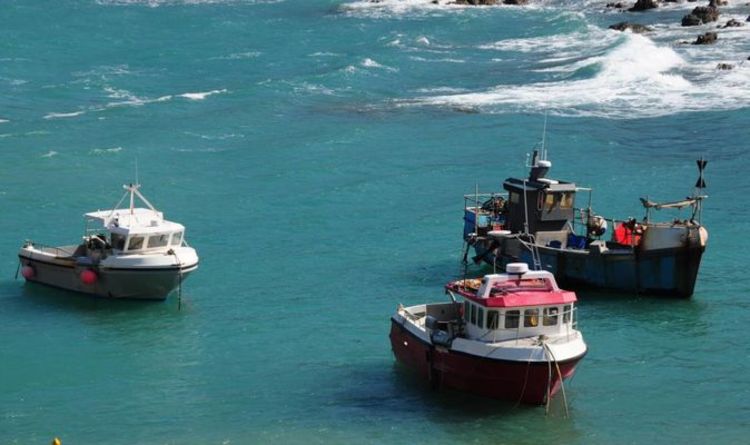