‘I want an explanation’: Spate of dog deaths linked to pet food

A knackery that sold pet food linked to the deaths of at least 10 dogs and the hospitalisation of a further 50 is refusing to recall its products despite requests from the regulator.

Dogs across Gippsland and the Mornington Peninsula have fallen ill with severe liver disease over the past month. The common link in relation to the deaths appears to be that the dogs had eaten chopped beef from the Maffra Knackery, which also trades as Backmans Meats and Backmans Greyhound Supplies, which has a store in Seaford in Melbourne’s south-east. 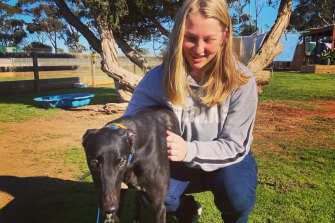 Grace Lewis and her greyhound Jess.

The situation has prompted Australia’s peak pet food association and dog owners to call for stronger regulation of the pet food industry, with many pet owners surprised to discover that government meat regulator PrimeSafe does not have the power to force businesses to recall products.

While PrimeSafe asked the knackery and a pet shop in Bairnsdale to issue a voluntary recall of the product after becoming aware of the issue on July 2, only the pet shop obliged.

“The PrimeSafe investigation at the licensed pet meat processor continues,” a spokeswoman said.

An Agriculture Victoria spokeswoman said the organisation was investigating why a cluster of dogs were suffering severe liver disease in the Gippsland and Mornington Peninsula areas.

“We advise on a precautionary basis that if your dog has consumed fresh or frozen raw pet meat and your dog is unwell, please contact your veterinarian immediately,” she said.

Infection has been ruled out and Agriculture Victoria believes potentially toxic food may be the cause of the illnesses and deaths. It is testing pet food and focusing on food additives, water sources, human and veterinary medicines, and poisonings.

The Main Street Veterinary Clinic in Bairnsdale has treated 32 dogs that have fallen ill, and seven of these animals have died.

Director Jade Hammer said the clinic began seeing sick dogs towards the end of June, and he soon discovered they all had something in common: they had eaten meat from the knackery.

He said the dogs were refusing food, listless, drinking lots of water and had yellowed eyes, and some were vomiting.

Blood tests showed the dogs’ liver enzymes were elevated due to the ingestion of toxins that Mr Hammer believes have contaminated the meat.

“We may not ever find out what the toxin is but anything purchased from the start of June should not be consumed by pets,” he said.

“The pet food industry needs to be better regulated.”

Jenni Lewis and her 16-year-old daughter Grace are mourning the loss of their beloved greyhound Jess, who died on June 24 after eating beef chunks from the knackery. The Warragul family’s four dogs had been eating meat from the knackery for almost a year. It was delivered to their door every month in 10-kilogram packets, which were divided into portions and frozen.

They first realised something was wrong with Jess when the two-year-old rescue dog went off her food. They took Jess to the vet and she was given anti-nausea medication. But she continued to decline and began whimpering when she returned home. Jess was taken to the vet in the early hours of June 24 and put on an IV drip before dying later that day. Blood tests revealed elevated enzymes in the dog’s liver.

Grace said she was struggling to come to terms with the loss of her pet, who would bound down the hallway towards her when she came home from school. “I want an explanation as to what what happened: what was wrong with the meat?”

Mount Eliza mother Emma Vorozilchak bought 40 kilograms of chopped beef from Backmans Greyhound Supplies in Seaford on June 22. On July 6 her labrador Olive vomited up her meal and was unable to keep anything down.

She took Olive to the vet and blood tests revealed the dog’s liver was failing. 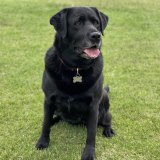 After the vet suggested Olive may have eaten contaminated meat, Ms Vorozilchak’s partner phoned Backmans Greyhound Supplies in Seaford. “The woman in the shop said she had spent $20,000 on testing and the meat came back fine,” Ms Vorozilchak said.

Olive was taken to an animal hospital and put on an IV drip and given a blood transfusion. Ms Vorozilchak, who has an eight-week-old baby, said she was unable to afford the veterinary costs, which have amounted to more than $6500, so she took Olive home so she could be more comfortable.

“We stayed up all night for her, syringing water into her mouth. But it got to the point where we called the vet nearby to take her in and she was euthanised. We tried to do as much as we could.”

She said her sorrow had now turned to anger. “There should be better regulation. We should be told when there is an issue.”

“Our goal is for mandatory rather than voluntary standards and recall protocols to be established for all pet food manufacturers and marketers in Australia,” she said. “Pet owners can be reassured that members of the [association] are held to the Australian Standard and are committed to continuing to improve pet health in Australia.”