New York: With 1.3 billion people jostling for space, India has always been a hospitable environment for infectious diseases. And the coronavirus has proved to be no exception. The country now has more than 6 million cases, second only to the United States.

An ambitious study of nearly 85,000 of those cases and nearly 600,000 of their contacts, published Wednesday (Thursday AEST) in the journal Science, offers important insights not just for India but for other low and middle-income countries.

Among the surprises: the contact-tracing study found that children of all ages can become infected and spread it to others — offering compelling evidence on one of the most divisive questions about the virus. 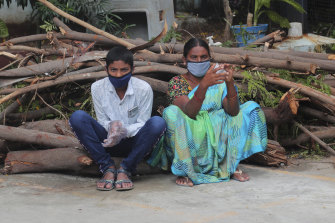 People wait to be tested for COVID-19 in Hyderabad, India, on Tuesday.Credit:AP

And the report confirmed, as other studies have, that a small number of people are responsible for seeding a vast majority of new infections.

An overwhelming majority of coronavirus cases globally have occurred in resource-poor countries, noted Joseph Lewnard, an epidemiologist at the University of California, Berkeley, who led the study.

India recorded its first case of COVID-19 on January 30 in an Indian citizen evacuated from China. 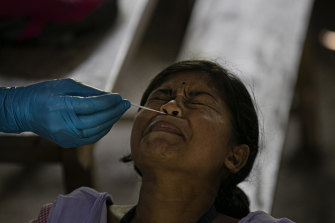 An Indian health worker takes a nasal swab sample of a student at a college in Jhargaon village, India.Credit:AP

The study focused on two southern Indian states, Andhra Pradesh and Tamil Nadu, which together have a population of about 128 million and represent two of the five Indian states with the most cases. They also have among the most sophisticated healthcare systems in the country.

Contact tracers reached more than 3 million contacts of the 435,539 cases in these two states. The researchers analysed data for 575,071 contacts for whom test information was available.

The contact-tracing data revealed that the people infected first were more likely to be male and older than their contacts.

Lewnard and his colleagues also looked at infections in contacts by age and sex and found that infected people tended to spread the virus to those of similar ages. Overall, the researchers found, just 5 per cent of people accounted for 80 per cent of the infections detected by contact tracing.

In particular, he added, few studies anywhere have done contact tracing at the scale of the study.

"I think it's some of the most important data we collect in an epidemic in order to decide what kinds of interactions are safe and what kinds are not," he said. And yet "data like this has not really been published very much."

Although its overall total of cases is huge, the per capita number of cases reported daily in India — and in many other low-income countries, including in Africa — is lower than in Spain, France or even the United States. And its number of deaths has not yet topped 100,000 — which has surprised some scientists.

India "is a place where you would expect a disease like this to roar through, at least in the older populations," said Dr Krutika Kuppalli, an infectious disease expert at the Medical University of South Carolina. "They haven't seen that as much as you would expect."