A hero interrupted a rapist’s brutal attack by putting him in a chokehold and punching him in the face.

Steven Lequesne, 23, ‘preyed’ on a lone vulnerable woman who had been on a night out in Southport, Merseyside.

CCTV footage showed the victim kicking Lequesne and trying to fight him off as he raped her in bushes, Liverpool Crown Court heard.

But when passer-by Christopher Fletcher heard the woman screaming ‘no’, a judge said he rushed to stop the ‘brutal and terrifying attack’.

Recorder Matthew Corbett-Jones said: ‘It was only when a brave member of the public came to her rescue that her ordeal came to an end.

‘Christopher Fletcher showed all the qualities of a brave, decent, upstanding member of the community in tackling you and summoning the police. 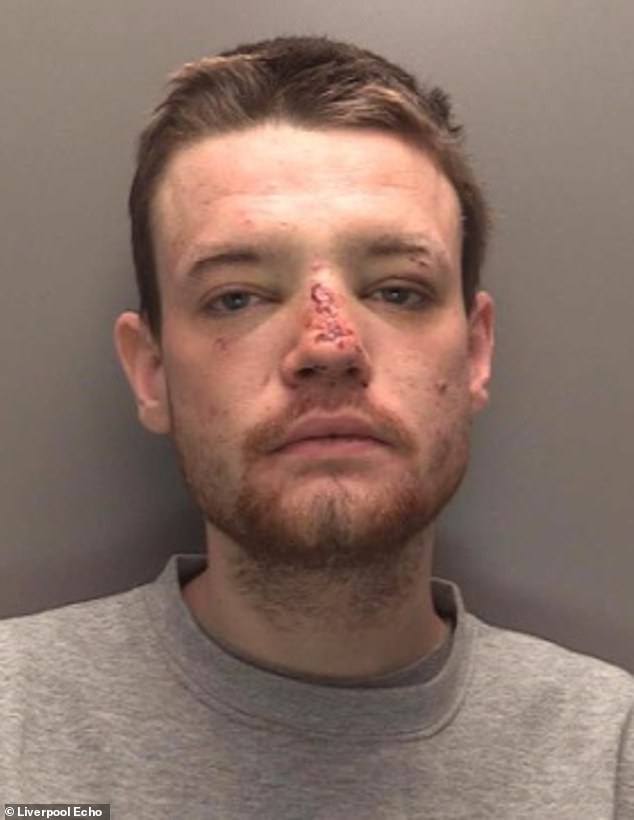 ‘Your actions that night show to me you are the opportunistic and highly predatory individual that you clearly are.’

The court heard Lequesne, of no fixed address but formerly of Tuebrook, Liverpool, raped his victim near Napthens Solicitors on Hoghton Street this summer.

Robert Wyn Jones, prosecuting, said the victim had been drinking at the Metropole Hotel in Portland Street earlier that night.

The woman and Lequesne spent some time there together after the pub shut, before walking through Southport railway station after 1am.

Mr Wyn Jones said: ‘She is clearly drunk. She doesn’t have any shoes on and she is stumbling.’

He played a CCTV clip in court that showed an ‘altercation’ between them which resulted in the woman trying to get away.

Mr Wyn Jones said: ‘She runs off to the left and he pursues her.’

The prosecutor said during a coming together ‘she is fighting him off and is pulled backwards to the ground’. 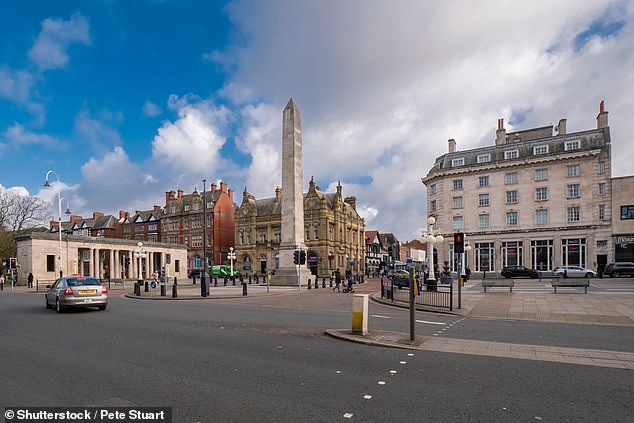 Steven Lequesne, 23, ‘preyed’ on a lone vulnerable woman who had been on a night out in Southport, Merseyside. Pictured: A general view of Southport

She got up and Napthens Solicitors’ CCTV cameras captured Lequesne attacking her in the bushes of a car park.

Mr Wyn Jones did not play this part of the footage but said Lequesne ‘examined her’ while using the light from his mobile phone.

She pushed him away but fell as ‘she lay on the ground, kicking out at him’.

A police car drove past and Lequesne ‘ducked down behind the bushes’, before the woman repeatedly kicked at him, but he pinned her down and raped her.

Mr Wyn Jones said Mr Fletcher walked past, saw Lequesne raping the woman while she was screaming ‘no’, so pulled Lequesne away.

Mr Wyn Jones said: ‘Mr Fletcher takes hold of the defendant around the neck in a chokehold.’

He said the witness took Lequesne to the ground, before he called police and held him until officers arrived.

Lequesne denied rape when interviewed, but was linked to the attack by DNA evidence and pleaded guilty yesterday.

Mr Wyn Jones said the victim is now afraid to go outside and is ‘constantly looking over her shoulder’.

The woman went back to work but broke down and has not gone back since, so is now on Universal Credit.

Mr Wyn Jones said: ‘She has a much more limited group of friends she says now because she finds socialising and trusting people very difficult.’

Lequesne, also known as Stephen Lequesne, has 15 previous convictions for 21 offences, including harassment in 2018 and two offences of outraging public decency in 2020.

Nicola Daley, mitigating, said her client had mental health issues and urged the court not to pass an extended jail sentence. 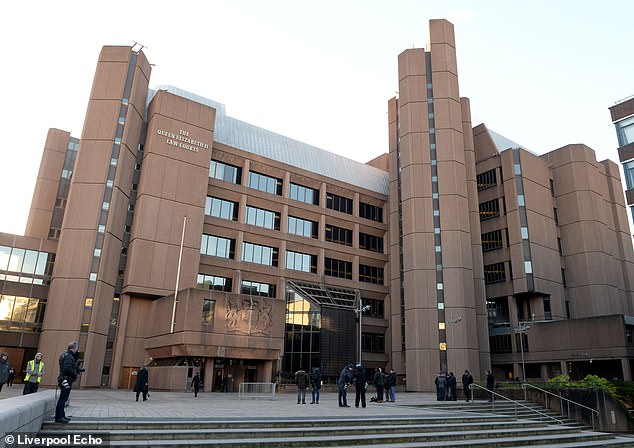 CCTV footage showed the victim kicking Lequesne and trying to fight him off as he raped her in bushes, Liverpool Crown Court (pictured) heard

She said the court ‘could and would perhaps find’ that he met the criteria of a ‘dangerous’ offender, as defined in law.

However, she asked the judge to consider what risk Lequesne will pose when released, given his young age, the work that could be done with him in prison and the fact he admitted the offence.

Ms Daley said Lequesne was repeatedly detained under the Mental Health Act up until 2020 and ‘has made a series of attempts to take his own life’.

Ms Daley said: ‘Perhaps he received some summary justice when he was punched to the face and admitted to hospital after the offence.

‘By pleading guilty and not prolonging these matters, that shows his remorse.’

Recorder Corbett-Jones said Lequesne followed the victim, before he used his torch to ‘leer’ at her, then raped her.

The judge told Lequesne: ‘It’s plain to see you had seized this opportunity when she was alone and vulnerable to prey on her.

‘This was a brutal and terrifying attack on a defenceless woman, in order for you to satisfy your desire for sexual gratification, which I have no doubt will cast a shadow across the rest of her life.’

Referring to a pre-sentence report, the judge told Lequesne: ‘You have not shown any genuine regret for your actions and the author of the report makes clear the insight that you have into the harm you have caused is non-existent.

‘You’re regarded as being in effect devoid of emotion.’

He said Lequesne was said to have a ‘very high likelihood of reoffending’, adding: ‘There is no evidence your mental health played any part in this offending and you clearly knew what you were doing.’

This type of sentence means Lequesne must serve at least two-thirds of the custodial term – seven years – behind bars.

He will only be released before the end of the sentence if the Parole Board no longer considers him to be a risk.

Lequesne must also sign the Sex Offender Register for life.

Recorder Corbett-Jones said he wanted to commend the brave behaviour of Mr Fletcher and ‘pay tribute to him’.

The judge said he would now put Mr Fletcher forward for formal recognition.