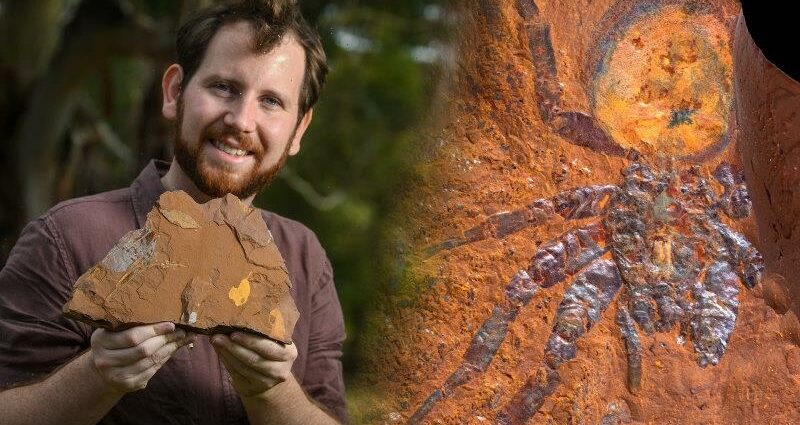 A Gulgong farmer’s discovery of 15-million-year-old fossils in a back paddock has led scientists to uncover extraordinary specimens, including new plants and animals preserved in what was once a billabong in a rainforest teeming with life.

The site contains rarely found fossils of delicate organisms, small animals and soft tissues frozen in time, allowing scientists to identify what fish ate for their last suppers, what pollen was carried by a sawfly and even detect a miniscule baby mussel that hitched a ride on a fish. 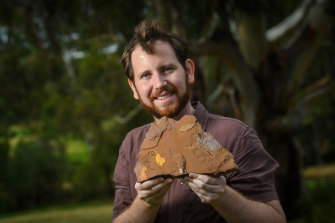 Dr Matthew McCurry from the Australian Museum with one of the fossils found at McGraths Flat. Credit:Justin McManus

Only four fossilised spiders have been found across Australia until the new find. So far, excavations of the site revealed 13 spiders preserved so perfectly that Dr Michael Frese, of the University of Canberra, could use electron microscopy to image delicate features such as claws and hairs.

“You can image every hair on the legs. You could count them if you were patient enough,” he said.

According to a paper published on Saturday in Science Advances by international scientists led by Dr Matthew McCurry of the Australian Museum and Dr Frese, the new site – called McGraths Flat after the sheep farmer who found it – was “exceptional” in many ways.

Many specimens were new to science, including trapdoor spiders, large cicadas, wasps and a variety of fish, Dr McCurry, a palaeontologist, said. 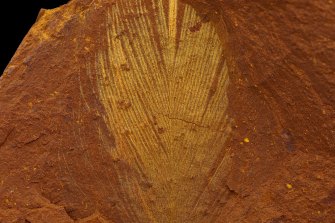 Using electron microscopy, scientists could tell that this feather was likely red or black. It was found at McGraths Flat near Gulgong in NSW. The newly discovered fossil site is of world significance. Credit:Salty Dingo

Unlike most fossils that preserve hard body parts, such as teeth and bones, the site contained a “range of rarely found fragile and soft-bodied organisms that are normally missing from the fossil record,” he said.

Farmer Nigel McGrath said he was clearing some hard red rocks in a paddock by throwing them into a bucket when he spotted a fossil of a leaf on a rock.

Once he found the first, he found “hundreds of rocks covered in leaves”.

Asked how he responded to the site being named in his honour, Mr McGrath deadpanned: “Most people die before they have something named after them.” He is in good company. Sir David Attenborough has had many animals and plants named after him, including an 18-million-year-old fossilised marsupial lion Microleo attenboroughi found in QLD.

Mr McGrath said scientists who visited the site were very excited. Asked whether the younger generation of his family was equally amazed, he replied”: “You know what kids are like. Show them a Game Boy and they are excited. Show them a rock and they aren’t.”

Mr McGrath’s family has run sheep and cattle outside Gulgong since the second world war, recently enduring one of the worst droughts on record.

Gulgong is an Indigenous word for “deep waterhole” – and the findings confirm that today’s sheep paddocks were once dense temperate rainforest.

Dating to the Miocene epoch, a period of mass extinction of species, McGraths Flat provided a window into how Australia would respond to climate change, said Dr McCurry.

“The fossils we have found prove that the area was once a temperate, mesic rainforest and that life was rich and abundant here in the Central Tablelands,” he said.

Dr McCurry said the fossils were preserved in iron-rich rocks that contained large amounts of the mineral goethite. These rocks were not previously thought to contain high-quality fossils.

This mineral had “encased organisms” that lived or fell to the bottom of the billabong. 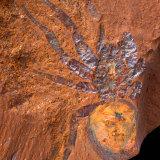 These sorts of fossil sites are so critical to studying how life has changed over time that palaeontologists have a special term for them: “Konservat-Lagerstätten”.

“Until now it has been difficult to tell what these ancient ecosystems were like, but the level of preservation at this new fossil site means that even small fragile organisms like insects turned into well-preserved fossils,” Dr McCurry said.

The exceptional quality of the fossils has led to new discoveries. A single feather was preserved so well that under a microscope Dr Frese could examine the subcellular organelles within cells that are associated with certain colours. His work revealed the feather was likely red or black.

Dr Frese said: “Everyone loves the feather. It is very delicate. Fossil feathers are rare because they do not sink easily.”

In another case, archaeologists found a preserved sawfly with pollen attached to its body. That allowed the scientists to see which flower it had visited or pollinated before it died.

An ancient aquatic version of Uber was Dr Frese’s favourite find: A fossil of a tiny fish showed an even smaller baby mollusc, less than 1mm, hitching a ride on its tail. 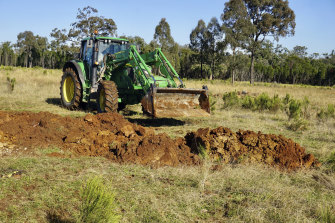 A rare photo of camera shy Nigel McGrath at the wheel of his tractor helping excavate the site near Gulgong where he found fossils. Credit:Simon McClusky

Dr Frese said he first heard of these larvae molluscs attaching themselves to fish to move around a waterway as a boy growing up in Germany. But the fossil is believed to be the first detailing this version of parasitism.

The iron stone that formed on the bottom of the lagoon also preserved the soft tissue of fish so well Dr Frese could see what they had eaten for their last suppers. It usually consisted of the aquatic larvae of the midges that were found on every second rock.

“Many of the fish’s gastrointestinal tracks are preserved,” he said. These revealed the midge’s antennae.

Field work at the site was funded by a donation from a descendant of Robert Etheridge, an early curator of the Australian Museum and an English palaeontologist who came to Australia in 1866.

A guide to the environment, what’s happening to it, what’s being done about it and what it means for the future. Sign up to our fortnightly Clear Air newsletter here.