India’s trust in China has collapsed as its confidence in Australia soared, enabling a watershed trade deal between Canberra and the rising economic power, according to an Indian cabinet minister.

Indian companies are feeling a “new excitement” about Australia as a result, said Minister for Commerce and Industry Piyush Goyal, who is heading a delegation of 58 Indian business leaders to Australia this week. 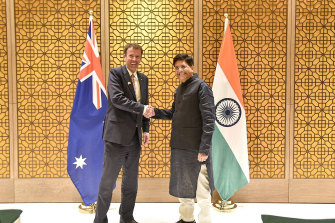 “This is the biggest delegation from India to Australia and we put it together in 36 hours.”

Two-way trade would double in five years, and the trade deal would be expanded, he predicted.

“Excitement about growing relations with Australia is palpable.”

Mr Goyal signalled no change in India’s controversial policy of continuing to trade with Russia as usual, despite Moscow’s illegal invasion of Ukraine. Delhi is dependent on Moscow for energy and weapons.

He said that India’s purchases of Russian energy and food grains were not inconsistent with US sanctions: “We are waiting for more clarity on the situation” to see whether any change in trade with Russia were required. The Morrison government has said that India’s position is not an issue for Australia.

Delhi’s trade deal with Canberra is the first trade liberalisation agreement that India has struck with a developed country in 10 years.

“It’s a pretty big deal for India to do a trade deal.”

He said Mr Goyal’s forecast doubling of existing two-way trade of $24 billion a year under the arrangement was entirely possible. “This deal takes the relationship beyond the three C’s – cricket, curry and the Commonwealth.”

Prime Ministers Scott Morrison and Narendra Modi witnessed the signing of the deal by video link on Saturday. Negotiations began a decade ago but were brought to a rapid conclusion in the past six months.

Mr Goyal said the two leaders had “struck a chord” with each other. By signing a strategic agreement, they had put a new foundation of trust into the relationship.

It was limited in scope to include wool, wine and horticulture but not dairy, rice or red meat, “but we are glad the door is ajar – we will take any agreement with a country with nearly two billion people and a growing middle class”.

Mr Goyal said China’s conduct in border skirmishes with India in 2020 had forced Delhi to take “a very cautious and concerned” attitude to Beijing.

“And on the trade front we do not get fair market access and our business people do not get reciprocal opportunity as we provide to Chinese businesses.

“Until we see some significant steps to improving the geopolitical situation on the one hand – its behaviour at the border is unacceptable to us – and until we see their commerce becoming more transparent and fair opportunity provided to Indian businesses, I do see that it will not be a very great economic relationship.”

He said India offered vast potential to Australian firms. “We have 1.35 billion people aspiring to have better quality of life. The developed world has concerns about where future growth will come from,” he said.

The Economic Co-operation and Trade Agreement (ECTA, which is also the Hindi word for unity) needs to be ratified by the Australian Parliament after the election before it can take effect.

Once ratified, “we want to sit down and conclude many more areas of mutual interest, so that we can look at a much, much more comprehensive agreement. We believe that both countries have a lot to offer. We have set out of work on what we can do on sustainability, we have a lot of work to do on the digital world.”

Among many more areas of people-to-people exchange, the deal is intended to bring more yoga instructors to Australia and more Australian watersports to India.