Thirteen Australian women have been subjected to invasive physical searches, without their consent, after airport terminal staff in Doha discovered a fetus abandoned in a bathroom.

In what's been described as a "gross violation of their human rights", it's alleged women on board the QR908 flight from Doha to Sydney earlier this month were detained without explanation and forced to remove their underwear for a genital examination that took place in an ambulance on the tarmac. 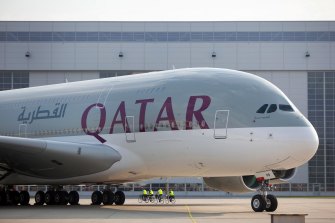 Women on the Qatar Airways flight to Sydney were subjected to invasive physical searches. Credit:Krisztian Bocsi

The incident has prompted intervention from the Australian government, with the Department of Foreign Affairs and Trade indicating in a statement on Sunday it has formally registered "serious concerns" about the incident with Qatari authorities.

"The Australian government is aware of concerning reports regarding the treatment of female passengers, including Australian citizens, at Doha (Hamad) airport in Qatar," a spokesman for DFAT said.

"We have formally registered our serious concerns regarding the incident with Qatari authorities and have been assured that detailed and transparent information on the event will be provided soon."

Director of Amnesty International Australia, Samantha Klintworth, told Seven News the incident is "distressing and disturbing and it is a gross violation of these women’s human rights".

"There needs to be a thorough and independent investigation and all of those involved need to be held to account," she said.

The most important news, analysis and insights delivered to your inbox at the start and end of each day. Sign up to The Sydney Morning Herald’s newsletter here, to The Age’s newsletter here and Brisbane Times‘ here.