London: Relatives of the hundreds of people killed when Malaysia Airlines flight MH17 was shot down will demand compensation from the forces accused of blowing up the plane.

Lawyers have also accused Moscow of compounding the grief of family members by deploying an "obstruction and disinformation" campaign to shield the Russian government from responsibility over the disaster. 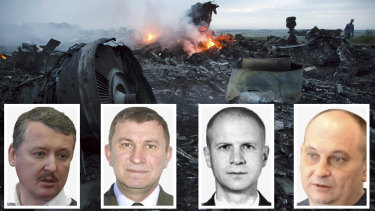 The Boeing 777-200 was flying over eastern Ukraine in July 2014 when it was destroyed by what prosecutors say was a high-powered missile launcher smuggled across the border from Russia.

All 298 passengers and crew died, including 38 Australian citizens and residents.

Four men are on trial in Amsterdam over the incident. They are accused of playing key roles in acquiring the deadly Buk-TELAR launcher during a long-running conflict between Ukrainian government troops and pro-Moscow separatists.

The court is hearing a series of complex legal arguments before the trial starts in full later this year and stretches well in 2021 and possibly 2022.

One of the arguments is about how compensation orders can flow from a guilty verdict in the criminal proceedings.

Lawyer Arlette Schijns, who is representing hundreds of family members at the trial, said compensation was not the main objective but a "means of achieving a higher goal".

"Compensation is not, in and of itself, the purpose that the relatives are pursuing," she told the court.

"First and foremost, they are seeking some kind of redress for the injustice that was carried out on the 17th of July 2014. And the payment of compensation is one way in which redress can be achieved."

They are being tried in absentia. Only Pulatov has engaged legal representatives.

"If we want compensation to be reasonable, a genuine symbol of the defendants shouldering responsibility for their own actions, then the compensation must reflect the seriousness and the importance of this crime," Schijns told the court.

It is unclear how any compensation would be extracted from the four men or any network they were involved with. A US court in 2018 ruled that two-dozen family members were entitled to compensation from Girkin but Schijns said the chances of that happening were "next to nothing".

Some relatives have already entered into confidential damages settlements with Malaysia Airlines.

Some 316 different family members have expressed an interest in seeking compensation out of the criminal trial.

The lawyer said relatives "have needs above and beyond compensation".

"People who have been harmed by another person's deeds often seek redress through, for example the facts being established, responsibility being acknowledged and understanding exactly what happened.

"Of all of these remedies, the establishing of facts is of greatest importance for the relatives. They want to know what exactly happened prior to and at the moment of the downing of flight MH17.

"As the prosecution has explained at great length already, establishing the facts is particularly difficult in this case because of the complicated political situation where we face obstruction and disinformation from the Russian federation."

Prosecutors in March warned that witnesses in the trial faced a "genuine threat" of being murdered by Russia's intelligence service. They also said Moscow had deployed a combination of intimidation on the ground and a massive disinformation campaign online to disrupt and discredit efforts to find out who shot down MH17.

"In addition to the grief they face because of their dearest, they are additionally injured by Russia's attitude," Schijns said on Monday.

Former Australian prime minister Tony Abbott said in March that the Russian government was "evil" for covering up its role in the disaster.

"When it comes to ethics and morality, not all that much has changed since the worst days of the Soviet Union," he told The Sydney Morning Herald and The Age.

Dozens of family members are expected to eventually address the trial in a highly emotional process which could take weeks to complete.

"We are dealing with individuals who suffered a terrible loss six years ago – a loss that they still feel in their daily lives now," Schijns said.

The hearings will resume on September 28.