Germany apologises for slaughtering 75,000 tribespeople in Namibia and accepts it was genocide – but chief rejects £950million funding deal as ‘an insult’

Germany apologised on Friday for its role in the slaughter of Herero and Nama tribespeople in Namibia more than a century ago, officially recognising the massacre as a genocide.

Germany has also agreed to fund projects worth over a billion euros as a way of recompense in a deal with the Namibian government, Foreign Minister Heiko Maas announced.

But, the agreement was rejected by Herero paramount chief Vekuii Rukoro because it did not include the payment of reparations.

‘That’s a black cat in the bag instead of reparations for a crime against humanity,’ he said, referring to a German commitment to fund 1.1 billion euros ($1.3 billion) of reconstruction and development projects in Namibia.

‘No self-respecting African will accept such an insult in this day and age from a so-called civilised European nation.’

German occupiers in Namibia killed tens of thousands of indigenous Herero and Nama people in 1904-1908 massacres, which historians have called the first genocide of the 20th century. 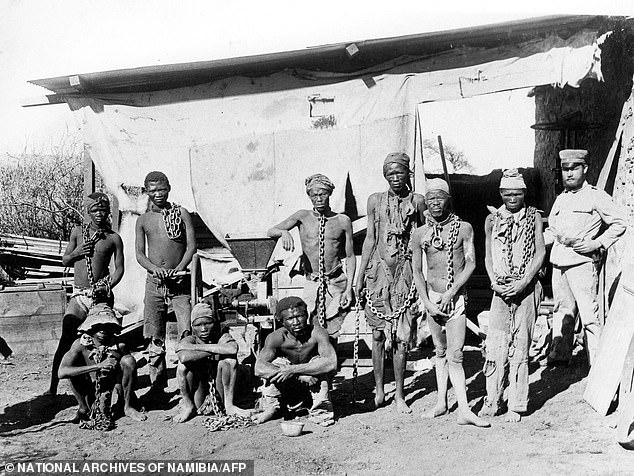 Germany apologised on Friday for its role in the slaughter of Herero and Nama tribespeople in Namibia more than a century ago, officially recognising the massacre as a genocide 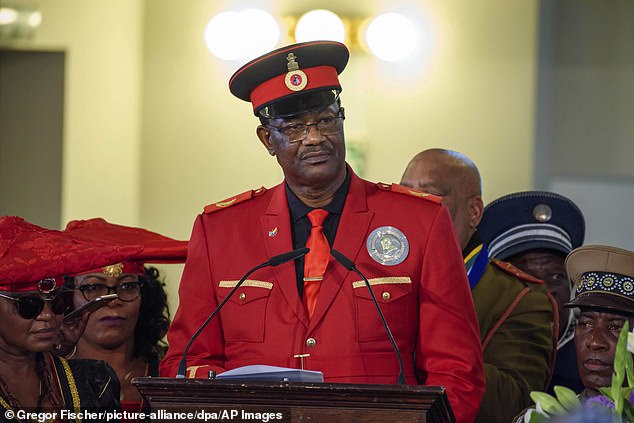 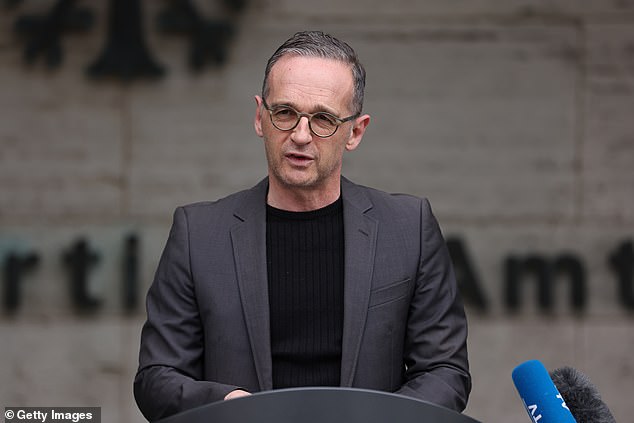 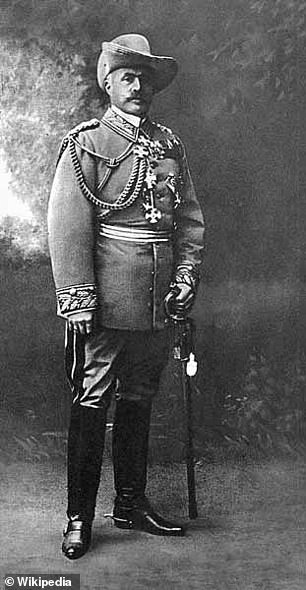 The accord announced Friday is the result of more than five years of talks with Namibia on the events of 1904-1908, when Germany was the southern African country’s colonial ruler.

German rule of the territory was punctuated with numerous rebellions by natives.

Tensions boiled over in 1904 when the Herero rose up, followed by the Nama, in an insurrection crushed by German imperial troops.

In the Battle of Waterberg in August 1904, around 80,000 Herero fled including women and children.

German troops went after them across what is now known as the Kalahari Desert. Only 15,000 Herero survived.

Historians say German General Lothar von Trotha, who was sent to what was then German South West Africa to put down an uprising by the Herero people in 1904, instructed his troops to wipe out the entire tribe.

They say that about 65,000 Herero were killed and at least 10,000 Nama after a revolt against land seizures by colonists.

While Germany has previously acknowledged ‘moral responsibility’ for the killings, it had avoided making an official apology for the massacres to avoid compensation claims.

In a statement announcing an agreement with Namibia following more than five years of negotiations, Foreign Minister Heiko Maas said the events of the German colonial period should be named ‘without sparing or glossing over them.’

‘We will now also officially call these events what they were from today’s perspective: a genocide,’ Maas said.

‘In light of Germany’s historical and moral responsibility, we will ask Namibia and the descendants of the victims for forgiveness.’ 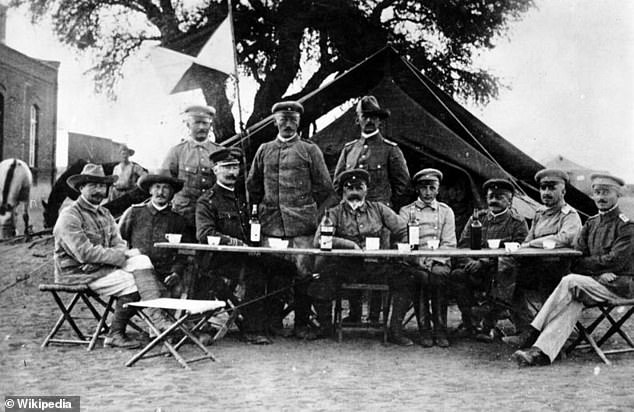 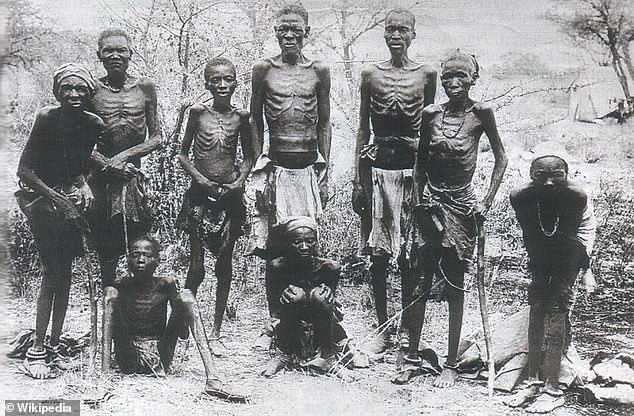 While Germany has previously acknowledged ‘moral responsibility’ for the killings, it had avoided making an official apology for the massacres to avoid compensation claims 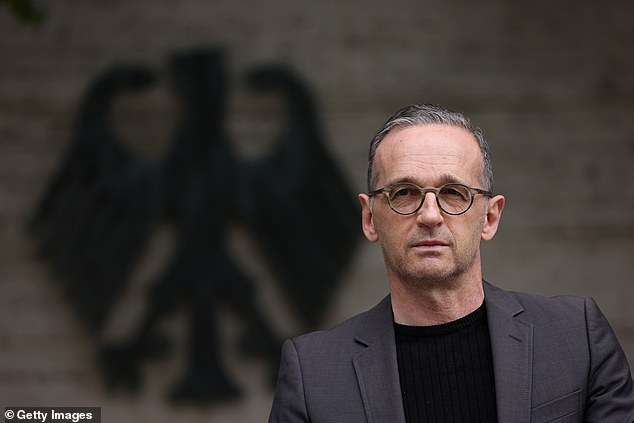 In a statement announcing an agreement with Namibia following over five years of negotiations, Foreign Minister Heiko Maas said the events of the German colonial period should be named ‘without sparing or glossing over them’

The mass killings of indigenous Herero and Nama people in 1904-1908 is what many historians say is the first genocide of the 20th Century.

Tensions boiled over in January 1904 when the Herero rose up, led by Samuel Maharero, followed by the Nama, led by Captain Hendrik Witbooi, in an insurrection crushed by German imperial troops. 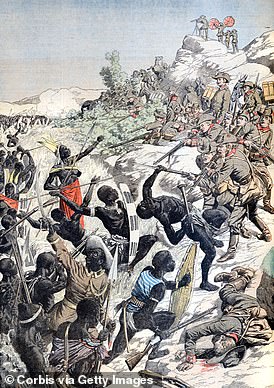 In the Battle of Waterberg in August 1904, around 80,000 Herero fled including women and children.

Those who weren’t killed in battle died from starvation and dehydration after being driven into the desert.

The conflict resulted in the deaths of about 75 percent of the Herero population.

From 1884, Namibia was a German colony. Being the country’s only colony considered suitable for white settlement at the time, Namibia attracted a large influx of German settlers.

The settlers were encouraged by the government to expropriate land from the natives, and forced labour was used, resulting in deteriorating relations with the indigenous people.

After the First World War, the League of Nations mandated South Africa to administer the territory.

The country finally gained independence in 1990.

He added: ‘Our aim was and is to find a joint path to genuine reconciliation in remembrance of the victims,

‘That includes our naming the events of the German colonial era in today’s Namibia, and particularly the atrocities between 1904 and 1908, unsparingly and without euphemisms.’

‘We will now officially call these events what they were from today’s perspective: a genocide.’

Talks between Germany and Namibia opened in 2015, more than a decade after a 2004 visit to Namibia in which then-Development Minister Heidemarie Wieczorek-Zeul offered Germany’s first apology for the killings.

Germany says that representatives of the Herero and Nama were involved in the negotiations, though Berlin’s direct dealings have been with the Namibian government.

Maas said that, ‘as a gesture of recognition of the incalculable suffering,’ Germany plans to support Namibia and the descendants of the victims with a 1.1 billion-euro ‘rebuilding and development’ program in whose design and implementation ‘the communities affected by the genocide will take a decisive role.’

Namibian media reported on Thursday that the money would support infrastructure, healthcare and training programs over 30 years.

They will be separate from continuing development aid to Namibia.

At the same time, Maas said that ‘legal claims to compensation cannot be derived from this.’

That reflects Germany’s position that the Genocide Convention of 1948 can’t be applied retroactively, and that its liability is political and moral rather than legal.

Anne Marcus, a 34-year-old German living in Namibia, said she was suspicious of the announcement because it came at a time when Namibia was financially vulnerable.

‘I think it was a very opportune time for the Germans to act and agree on something, knowing that there was a likelihood for Namibia to accept whatever offer came their way. So I’m not entirely sure justice has been served,’ she said.

The southwest African country saw its economy contract by a record eight per cent in 2020 as it was hit by the coronavirus pandemic.

Last month, it received its first-ever funds from the International Monetary Fund to address the country’s deteriorating fiscal position.

Germany, which lost all its colonial territories after World War One, was the third biggest colonial power after Britain and France.

However, its colonial past was ignored for decades while historians and politicians focused more on the legacy of Nazi crimes, including the Holocaust.

In 2015, it began formal negotiations with Namibia over the issue and in 2018 returned skulls and other remains of massacred tribespeople that were used in colonial-era experiments to assert claims of European racial superiority.

In August 2020, Namibia turned down Germany’s offer of £9 million as reparations for colonial massacres, stating that it needed to be ‘revised’.

Namibia’s President Hage Geingob said reparations offered by Germany for mass killings in its then colony at the start of the twentieth century were ‘not acceptable’.

‘The current offer for reparations made by the German government remains an outstanding issue and is not acceptable to the Namibian government,’ Geingob said in a statement after the briefing.

The president also noted at the time that Germany had declined to accept the term ‘reparations’, as that word was also avoided during the country’s negotiations with Israel after the Holocaust.

Germany took control in Namibia – known then as South West Africa – on August 7, 1884, over forty years after the first missionaries arrived in the region.

Africa had long been a target for more economically developed nations for centuries thanks to its wealth of natural resources and enormous landmass.

Germany got a foothold in South West Africa during ‘Scramble for Africa’, a frantic period of colonisation, occurred during the eighteenth and nineteenth centuries. 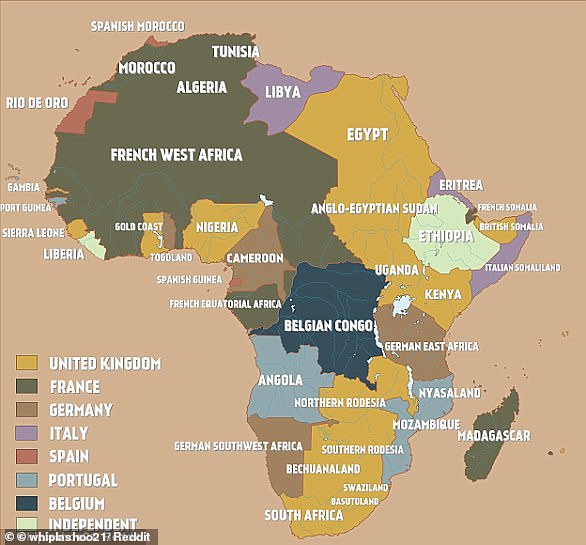 Germany got a foothold in South West Africa during ‘Scramble for Africa’, a frantic period of colonisation, occurred during the eighteenth and nineteenth centuries

Their supposed rights to the land were ostensibly confirmed in the Berlin Conference in 1884, when European nations vied for strategic superiority on the continent by invading as fast as they could.

Germany also seized land in the east, modern day Tanzania, and in the west in what is now Cameroon and Togo.

But, it was a far smaller player than Britain, France, and even Belgium, whose influence stretched across much of the continent.

At its height, Germany controlled an area of 835,100km², about one and a half times the size of its European territory at the time. 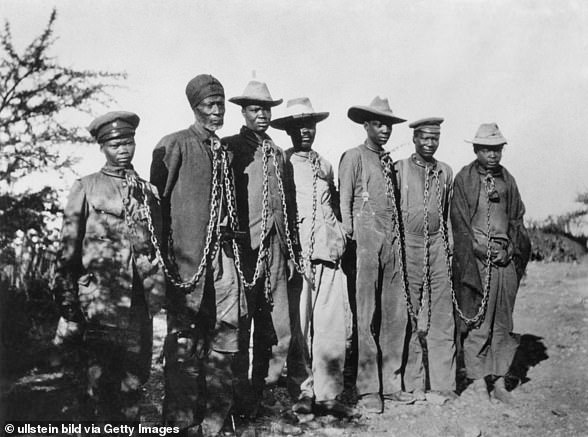 Herero captives pictured in chains during the 1904-1908 uprising. Their insurrection was crushed by German imperial troops

German rule of the territory was punctuated with numerous rebellions by natives, including a revolt against colonists land seizures which led to a campaign of reprisals now recognised as a genocide.

The European state officially lost its African territory in the 1919 Treaty of Versailles at the end of the First World War.

In reality, Germany had lost control over the region known as South West Africa much earlier in 1915, when the area was invaded by South African and British forces.

The British Empire then, under a mandate from the League of Nations, ruled the country until independence in 1990.