From the Archives, 1972: 110 arrested as anti-US protests sweep Australia 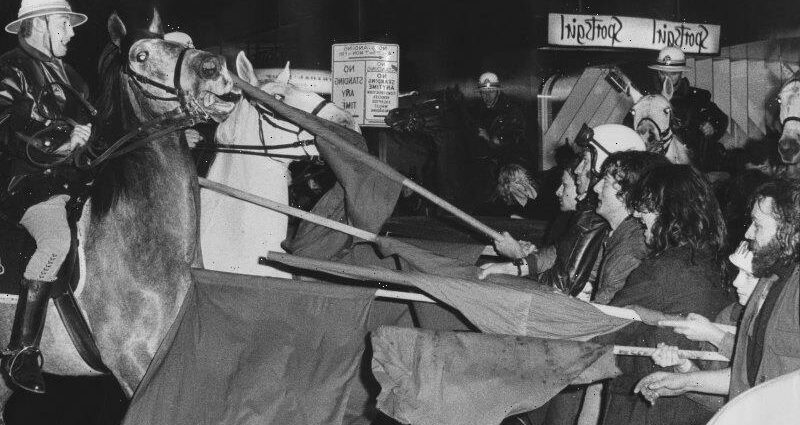 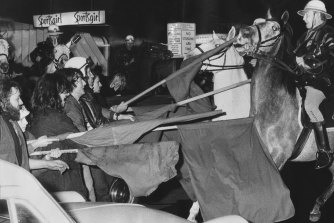 More than 110 people were arrested in three State capitals yesterday as thousands staged violent demonstrations against American escalation of the Vietnam War.

The U.S. Consulate in Melbourne was stoned, fire bombs did $20,000 damage to an American office building in Brisbane, and police battled with demonstrators trying to storm Sydney Town Hall.

In Melbourne about 2000 demonstrators—mainly students and unionists—stoned four buildings during a four-hour rampage through the city.

Police said last night that 10 men and one woman had been charged on counts including assault with a weapon, resisting arrest, and hurting a police horse.

Most of the demonstrators were arrested after police horses charged a crowd hurling stones, bolts and lead weights at the Pan Am airline building in Collins Street.

Police said one demonstrator would be charged with having assaulted Superintendent Gerald Hickey, officer in charge of metropolitan police.

Superintendent Hickey — who was commanding the demonstration “taskforce” of more than 80 police — was hit with a flagpole, and knocked to the ground when he walked into the crowd outside the Pan Am building.

The Pan Am building — its ground-floor windows barricaded with sheet iron after Wednesday’s attack — had a fourth plate glass window shattered by a rock.

Police and demonstrators — carrying flag poles and loudhailers — fought in a fierce skirmish. Several demonstrators were flung to the ground, and one was batoned about the head.

City shoppers scattered into doorways as six police horses charged up the footpath into the chanting, jeering crowd. A St. John ambulance officer on duty said about six people had been treated for cuts and bruises after the charge.

The demonstrators rallied in the City Square, waving red and black banners and chanting “U.S. out of Indo-China”,” Yankee Go home” and “Kill Nixon.”

About 1500 marched through heavy rain squalls to the American Consulate in Albert Street, South Melbourne. The building was ringed with barriers and guarded by 60 uniformed, plainclothes and mounted police.

In SYDNEY about 80 demonstrators were arrested during a three-hour running battle with police. About 3000 demonstrators took part in the anti-war march.

In BRISBANE 23 people were arrested as the special police public order squad clashed with about 800 demonstrators in the centre of the city.