HOW you doin'? Well, not very well, seeing as you ask.

I'd lived quite happily without Friends and all its catch-phrases, since it finished in 2004. 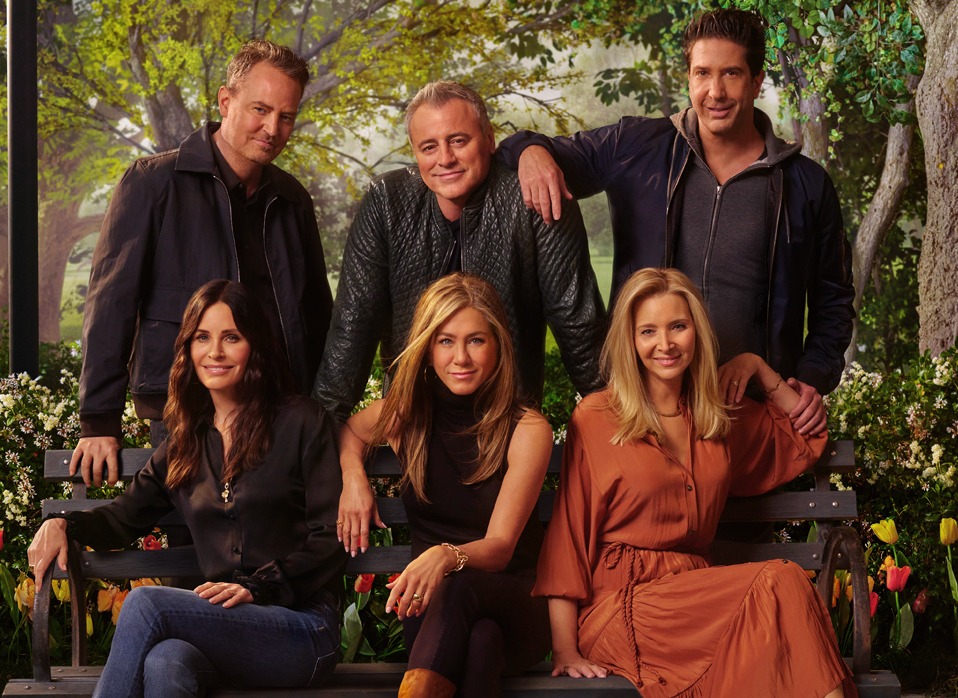 But, after 17 care-free years, Sky 1 and the actors' agents, presumably, had decreed they must all come together for a two-hour Friends Reunion, at the old Warner Bros set, in Los Angeles, where the six stars gathered in various states of middle-aged disrepair.

The three women, it hasn't got to be said, but I'm going to anyway, have weathered the storm much better than the blokes.

With or without a bit of help, Jennifer Aniston, Courteney Cox and Lisa Kudrow all look like fairly close approximations of Rachel Green, Monica Geller and the other one.

'Le Blanc is clearly the warmest and funniest'

David 'Ross' Schwimmer's face, on the other hand, has become 'gerbilised' while Matt Le Blanc is now the same size as he was when Joey Tribiani dressed up in all of Chandler's clothes on 'The one where nobody's ready'.

Matthew Perry was also just about present, but it's clear he's suffered by far the biggest emotional toll from appearing in a show which, as host for the night James Corden told us, was a monster hit in "220 territories." Or as he used to say, 'countries'.

The pressure still clearly weighs on the poor bloke enormously. The trouble with any comedy show cast reunion, though, is that most actors are empty vessels without the show's script-writers to make them look funny, charming and spontaneous.

Of these six, Le Blanc is clearly the warmest and funniest and the only one with whom you'd probably want to share a drink.

'There was the unavoidable chorus of Smelly Cat'

That's why the Reunion production team had taken the precaution of padding out the two hours with games, Q&A sessions, interviews with writers and contributions from fans, like Ricardo, from Germany, who said: "I was a gay man who wanted to be like Jennifer Aniston, so you can imagine how lonely I was."

Yes, yes I can, Ricardo.

And I don't wish to dwell on the matter or any of the other ardent followers who all seemed to confirm the cliche that the only people who really liked Friends were those people who hadn't got any.

As well as the civilian obsessives, though, the night also offered famous fans and ex-cast members, including Reese Witherspoon who said "Each character could've had a show by themselves." So she can count herself lucky she never saw either series of Joey.

There was the unavoidable chorus of Phoebe's Smelly Cat song, as well, where Lisa Kudrow was joined by Lady Gaga who spouted some worthy nonsense about Phoebe being "The person for all of us, on Friends. The different one."

The most helpful link of the night, however, was provided by David Beckham who would have us believe he spends all his time away from the family watching old episodes and cited 'The one where nobody's ready' as among his favourites.

'They were mourning the death of comedy'

This was the episode where Matt Le Blanc dislocated his shoulder diving onto a chair during filming and, ironically, old footage of the incident was the only time I actually laughed during the entire two hours.

A sad commentary on me, I realise, though I think it also owes something to the terrible air of melancholy that hung over proceedings.

Part of this, of course, was down to the fact that everyone, both cast and viewers, was mourning their lost youth.

But I also think they were mourning the death of comedy here.

Nothing has come close to matching the global success of Friends, since it finished in 2004.

Nor will it so long as we are in thrall to the cult of woke, which is why BBC1 is currently having to rely on 42 year-old episodes of Fawlty Towers for laughs.

Such is the deathly hold it has on television, Friends would simply never get beyond the planning stage now.

Joey would've been dismissed as 'predatory', at best, a rapist at worst.

The women would all have to be 'feisty, independent clones,' who weren't defined by their relationships with men.

And before you know it, you'd have had a show that was as funny as the next fire at an orphanage.

Deep down, even the most woke know this to be true.

That's the reason, I think, why Lisa Kudrow gave short shrift to James Corden when he asked the most obvious question of the night.

I want that in blood, obviously. But thanks, Lisa. It's appreciated.