French election in numbers: 3 charts that show everything is at stake for Macron 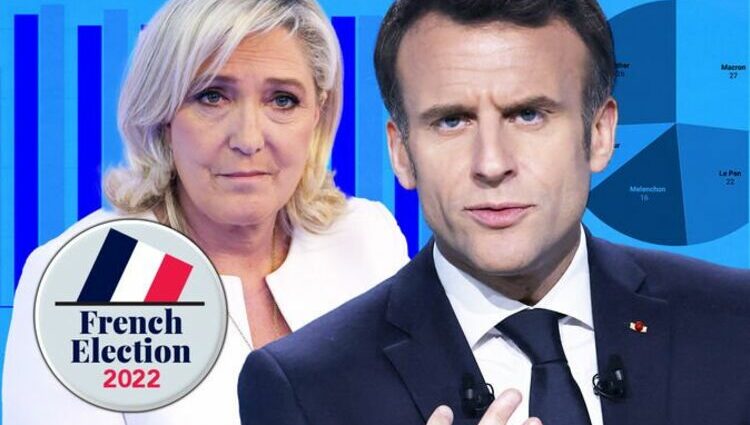 Emmanuel Macron is vying for another term in office this weekend, with polling stations open from 8am on Sunday, April 10. Sunday’s vote is the first of two all-important votes to decide whether the French President can cling on for another five years in office or if a rival can claim his mandate. Charts show far-right candidates Marine Le Pen and Eric Zemmour polling uncomfortably close for his liking, as residents clash over what matters.

Who is winning in the polls?

After five years in office, the latest figures show that some of Mr Macron’s sheen has worn off with French voters.

He is still the frontrunner but in a diminished position compared to 2017.

Polls have him a fraction ahead of his closest competitor, Marine Le Pen, by just five points on 27 percent to her 22 percent.

And charts show that his polling lead is trending down while Ms Le Pen’s trends upwards.

The trend has allowed the National Rally leader to whittle down a 12 percent lead given to Mr Macron by his support of Ukraine in late March.

Sunday’s vote is just one of two in France spread out over two weeks in April.

The first whittles down the 13 candidates to two leading finalists, one of whom is guaranteed to take more than 50 percent of the vote in a second ballot on April 24.

Although he won in 2017, Ms Le Pen is nipping at his heels and likely to cause a repeat of the last election cycle.

Having just two candidates on the ballot leaves a chance for an upset as supporters of unsuccessful candidates can flock to someone else they may not necessarily have backed otherwise.

Polling from Ipsos of 1,723 voters found that Mr Macron has more outside support than Ms Le Pen.

The firm found that 100 percent of first-round voters would stick to him in the second, while he also syphons two percent of Ms Le Pen’s.

While the National Rally leader has prospective backing in the second round from 83 percent of Mr Zemmour’s supporters, voters scattered across the remaining candidates are more likely to migrate to Mr Macron.

Although most of Mr Melenchon’s voters are undecided (at 48 percent), 31 percent said they would turn to the incumbent President.

Valerie Pecrasse and Greens candidate Yannick Jadot’s supporters would do the same, with 53 percent of each likely to vote for Mr Macron.

In 2022, researchers have found voter disaffection levels at their highest rates in decades.

What are the key issues at play?

Whether or not alternative candidates can get their leg up over Mr Macron depends on their stance on key issues.

French voters have a selection of concerns for politicians to consider, the most pertinent of which is the cost of living.

An OpinionWay poll of 1,500 people found that most people have centred their concerns on the economy.

Immigration, environment and employment ranked fourth and fifth on the list with 35 percent and 30 percent, respectively.

Those concerns could spell trouble for Mr Macron, given Ms Le Pen’s hardline stance on social and immigration issues that would place “native” French people atop the financial and social pecking order.

While voters could migrate across the political spectrum come April 24, many are equally likely to abstain.

Voters typically use abstentions to protest the quality of candidate selection, with some ending their vote in the first round and others staying home altogether.

In 2022, researchers have found voter disaffection levels at their highest rates in decades.

If those predictions hold, levels could hit their lowest since 2002.

While an upset seems unlikely right now, that could easily hand an advantage to Ms Le Pen, whose voter base appears more active.