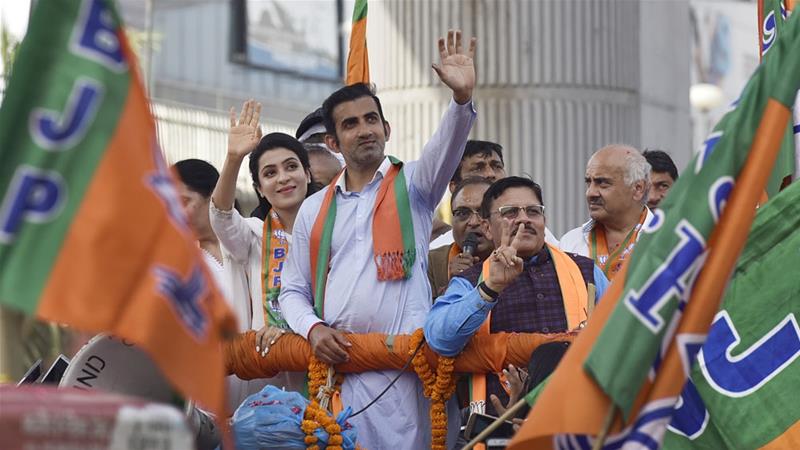 The venue was a temple courtyard: the open foyer of the building had been festooned with saffron flags and swarmed with men wearing jute caps of the same colour.

The organic enthusiasm of the previous election, when incumbent Prime Minister Narendra Modi swept to power in a landslide victory in 2014, appeared to be missing even among the party faithful.

Instead, the mood felt dark and rhetoric filled with menace. “We will remove all the traitors from Delhi,” said a local party leader in a barely-veiled reference to the country’s minorities, particularly Muslims and Christians.

Soon after, Gambhir arrived, pushing through the crowd surrounded by a protective circle of bouncers. The disingenuous humility that politicians seeking to be elected bring to such occasions seemed to be missing.

As he sat on the dais, speeches filled with a threatening and shrill tenor continued. Children of local residents, who had brought their cricket bats with them, went to Gambhir to get them signed.

Gambhir, 37, owes his fame and recognition to the years he spent as part of the Indian national cricket team. In 2011, he played a pivotal innings that won India the cricket World Cup.

Yet, throughout his career, he remained a largely reticent character, not enormously popular with his peers, fans or advertisers. Revealed in his recent autobiography, Shahid Afridi, a Pakistani cricketer, thought Gambhir had “an attitude problem”.

On March 22, Gambhir joined the BJP and soon after was named the party’s parliamentary candidate from the East Delhi constituency, one of the seven constituencies in India’s capital.

This move did not come as a surprise. As his sporting career faded, Gambhir stayed in the news for embracing the BJP’s hard nationalism.

He participated in a growing cult of valorising the military and adopted hard line positions on Kashmir, a disputed region in the midst of a pro-independence struggle which has been ongoing for decades. The region is claimed in full by both India and Pakistan.

“Gambhir has always been a petty and small person,” said Aakar Patel, a prominent writer and columnist. “Everything he has achieved here is through nastiness and abuse. He made his name by unleashing Twitter violence towards the weak, and becoming a social media commentator on nationalism.” 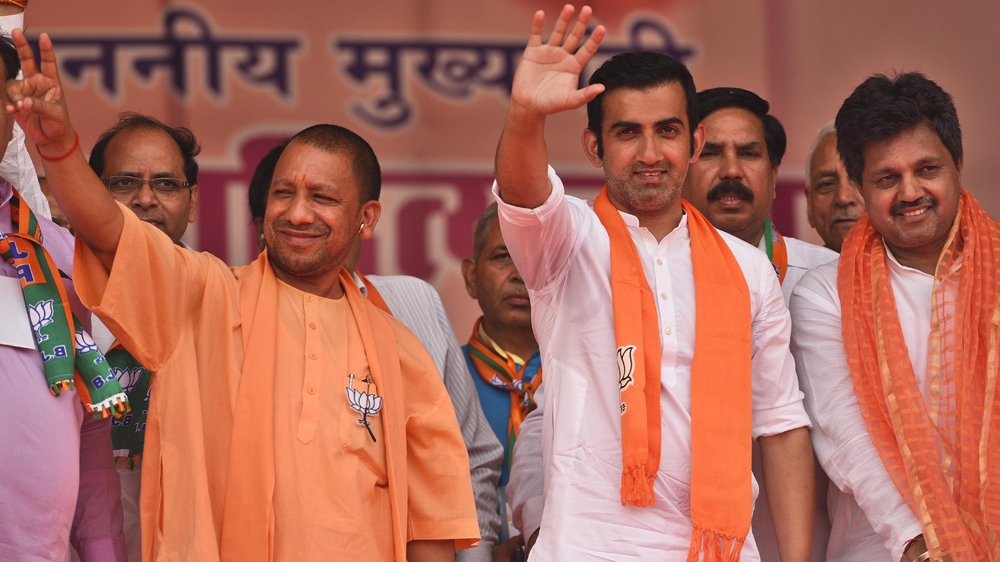 Gambhir’s candidacy is part of a wider trend: a growing nexus between the worlds of entertainment and politics under Modi. While all Indian political parties seek to harness the popularity of icons in sport and Bollywood, the BJP has historically employed the phenomenon more than the others.

Unlike the opposition Congress, which participated in India’s independence struggle against the British and lays claim to the legacy of most of India’s founders, recruiting celebrities has been a clever way for the BJP to garner attention in the political marketplace.

To widen his appeal, Modi has tapped into the immense popularity of Bollywood and cricket stars.

Recently, a fawning biopic of Modi was banned by India’s election commission ahead of the staggered national elections that kicked off on April 11.

Sunny Deol, a film star with an ultra-patriotic image formed through a history of starring in jingoistic movies, is the BJP’s parliamentary candidate from Gurdaspur in the western state of Punjab.

Ravi Kishan, a wildly popular actor in Bhojpuri-language films, and singer Hans Raj Hans are among other prominent celebrities who have joined the BJP of late, hoping for a step closer to a seat in India’s parliament.

The most egregious example of this shift was a flattering televised interaction between Modi and Akshay Kumar, one of Bollywood’s biggest stars.

A public relations exercise disguised as an interview, the exchange would have not been out of place in an authoritarian state. It drew criticism especially because Modi has not subjected himself to any hard interviews in office. India’s prime minister has not held a single press conference during his entire term.

Yet, the interaction with Kumar, termed “non-political” and focused on questions such as whether Modi liked eating mangoes, was part of his overall communication strategy.

On social media, Modi’s feeds regularly feature pictures of the prime minister with famous Bollywood and cricket stars. He often appears at the weddings of major celebrities.

In the midst of an economic slowdown, with unemployment at its highest level in decades and a deepening agrarian crisis, the BJP has turned up nationalist rhetoric in this campaign. Celebrities seem to offer another medium of distraction.

“There is nothing that qualifies Gambhir to be a member of parliament,” said Patel. “He hasn’t got out of the neighbourhood and looked at issues of poverty or anything else. His candidacy is an expression of Indian middle-class values.” 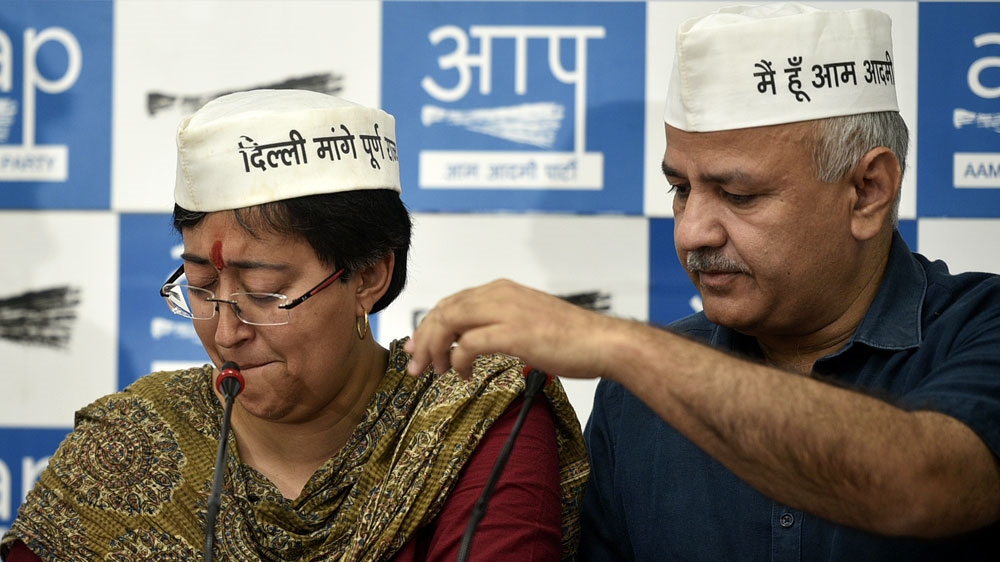 Invited by Atishi, his rival candidate from the Aam Aadmi Party (AAP), which runs the local government in New Delhi, to take part in a debate on the issues facing the constituency, Gambhir refused, saying he “did not believe in dharnas [demonstrations] or debates.”

Gambhir’s speech at the meeting in East Delhi was an extension of his party’s staple fare throughout this campaign. There was no articulation of his constituency’s local issues.

“Mr Modi will make India a superpower,” he said in his mild voice, drawing few cheers from the crowd. “Please support Mr Modi and form a strong government.”

The race between Gambhir and Atishi has grown increasingly heated. At a news conference this week, Atishi broke down, alleging that Gambhir and the BJP had been running a smear campaign against her by distributing pamphlets which included sexist and derogatory slurs about her personal life.

Gambhir, responding to the allegations, vowed to quit public life if the charges were proven.

Atishi, who has worked to transform New Delhi’s woeful public schools, is being seen as the very antithesis of Gambhir, a high-flying sports star who parachuted at the last minute.

Voters at the rally were worried about Gambhir’s commitment to the constituency. “I support Modi, but I’m worried about how much Gambhir will come here after winning,” said Naresh Joshi, 37, who lived nearby. “I’ve heard he travels abroad a lot.”

Amit Sen, 25, said he was an Aam Aadmi Party supporter but had just come briefly because he wanted to see Gambhir in the flesh. Gambhir had led his beloved Kolkata Knight Riders team to two titles in the hugely popular Indian Premier League. “But I remain a solid AAP supporter,” he said.

Gambhir, the richest among all parliamentary candidates in New Delhi, grew up in one of the city’s tony neighbourhoods. He  struggled to develop an emotional bond with the lower-middle class crowd he was addressing.

Leaving the stage, he barely stopped to speak with voters or hear their concerns. Instead, surrounded by the same protective circle of bouncers, he was ushered through the crowd and disappeared into the salubrious comforts of a waiting four-wheel drive.