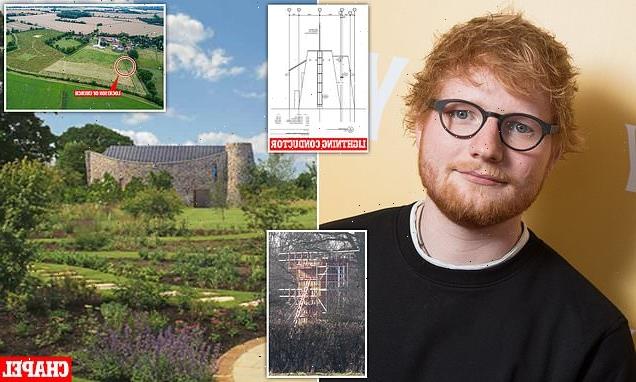 Ed Sheeran has drawn up plans to protect the new chapel being constructed on his £3.7million Suffolk estate – by installing a hi-tech lightning conductor.

The Shape of You singer who is regularly praised for his electrifying stage performance wants to protect his quiet retreat from being damaged or set ablaze by any lightning strikes.

The 42mm diameter rod protruding at least 7ft above the chapel’s tower will attract any lightning bolts in the vicinity, and safely dissipate the 300million volt electrical charge.

Sheeran who last month became a father for the second time has applied for planning consent to get the conductor placed on the chapel. 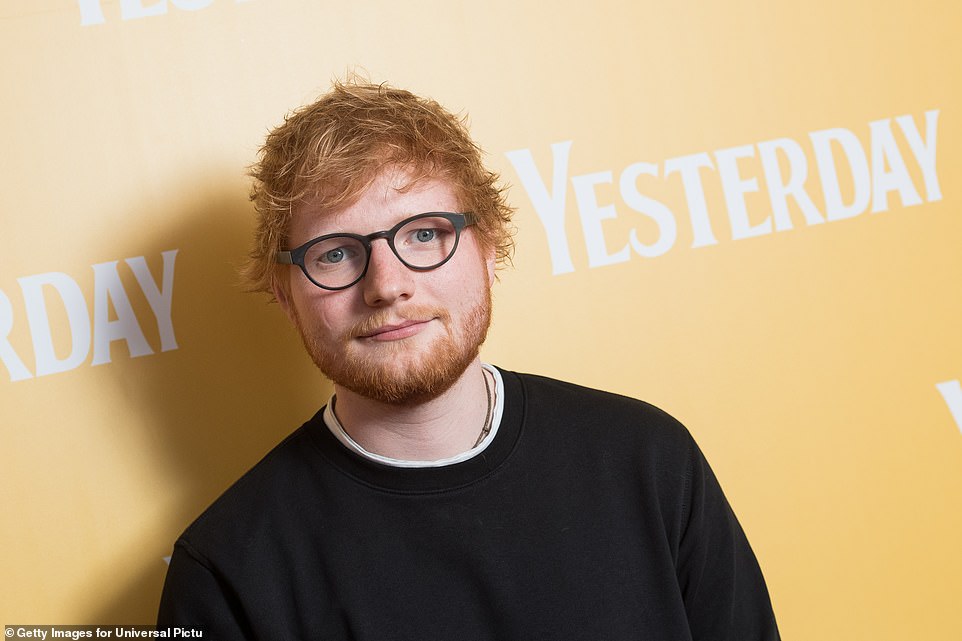 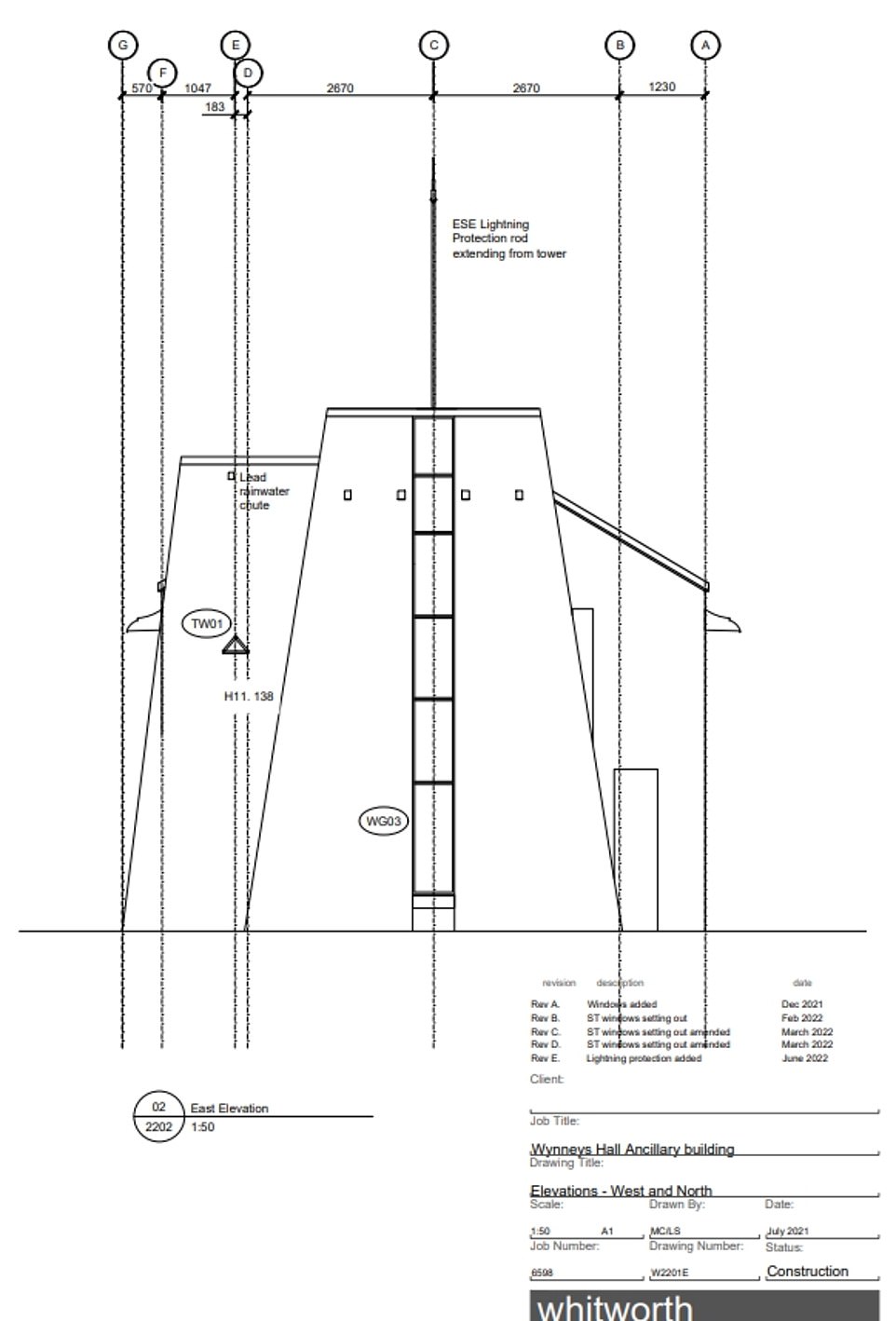 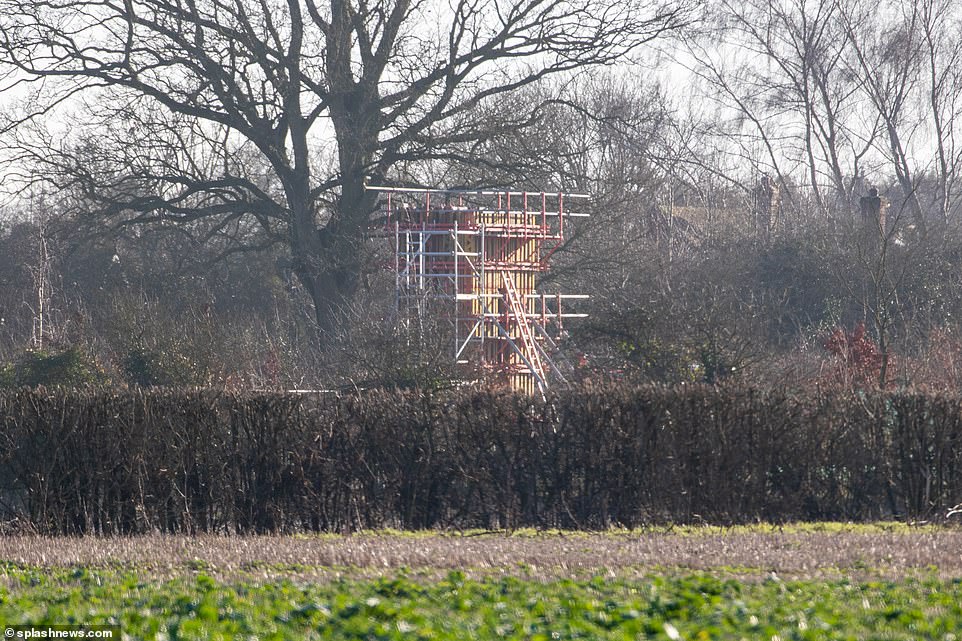 East Suffolk Council is set to rule on whether the plans are acceptable by July 13. No neighbours have so far objected to the plans to safeguard the chapel which the singer is building in the grounds of his rambling estate near his hometown of Framlingham, Suffolk

Documents submitted to East Suffolk Council reveal that it is planned to be a so-called Early Streamer Emission system conductor in line with international standards.

The ESE system includes a device which stores atmospheric energy as a storm approaches, and releases it when electrical levels around it jump moments before a lightning strike. The sudden release of energy attracts any lightning to the rod, making it less likely that it will hit any other areas of the building.

The plans show that any huge electrical charge will then be dissipated harmlessly down to earth by copper and aluminium links down the outside of the chapel.

East Suffolk Council is set to rule on whether the plans are acceptable by July 13. No neighbours have so far objected to the plans to safeguard the chapel which the singer is building in the grounds of his rambling estate near his hometown of Framlingham, Suffolk.

He has famously been buying up a string of neighbouring properties in a village location close to his birthplace to create his own rural retreat which has been dubbed Sheeranville by locals.

Building work on Sheeran’s chapel which has its own tower, spiral staircase and a burial crypt got underway in January this year.

One neighbour had objected to the building, stating back that there were already enough churches in the in local area to serve residents. Sheeran initially had plans to build a larger chapel rejected by council planners. But he made a new application in 2019 for a smaller, boat-shaped space, where he could ‘retreat for contemplation, prayer and relaxation’ and it was accepted. Planning documents explained it would be built on the eastern side of Sheeran’s estate because ‘the rising of the sun is relevant both in the Abrahamic and oriental traditions’. 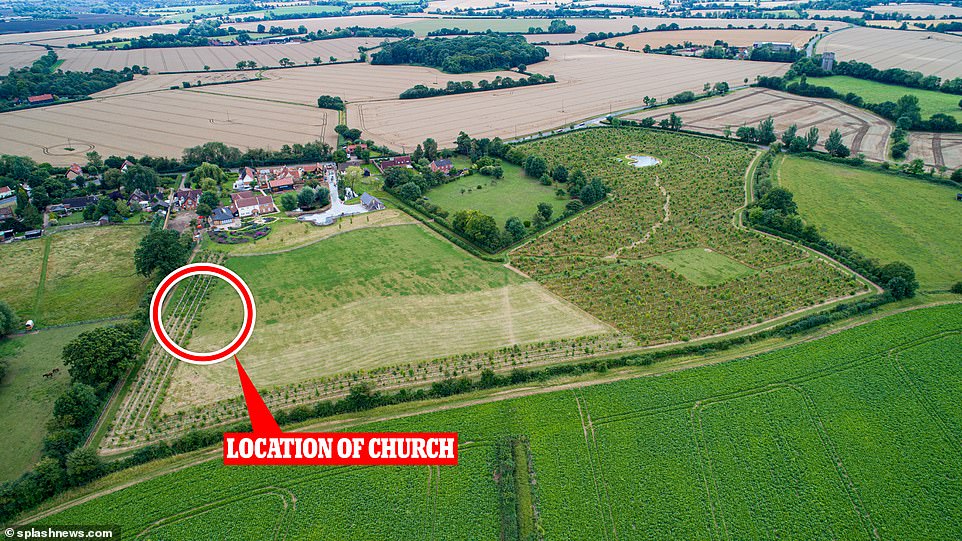 One neighbour had objected to the building, stating back that there were already enough churches in the in local area to serve residents. Sheeran initially had plans to build a larger chapel rejected by council planners 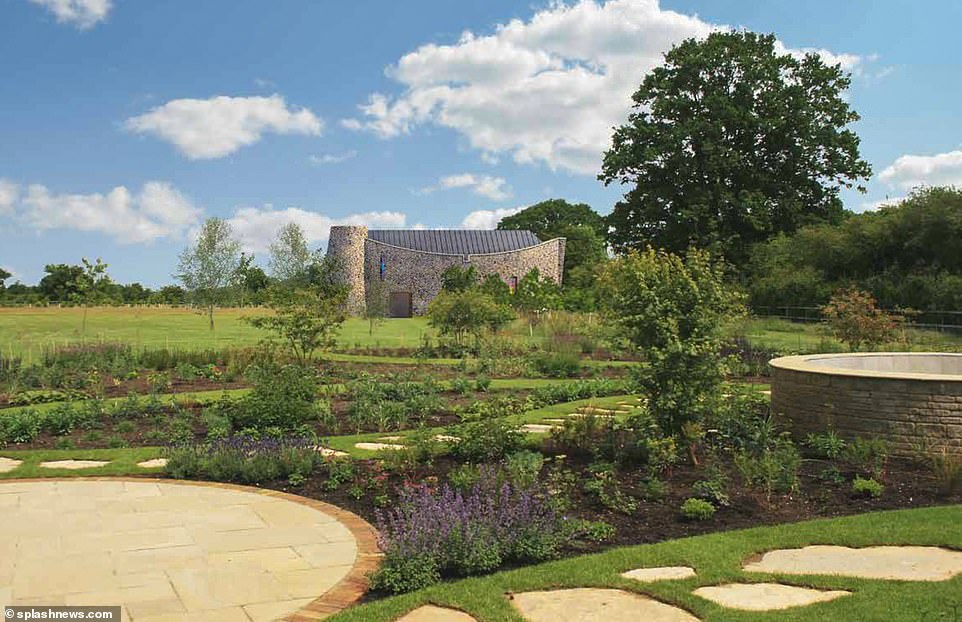 A design statement read: ‘It would address an important need for a private place of retreat for contemplation and prayer, for celebration of key life and family milestones, family and social gatherings, marriages, christenings, and so forth.

‘It would also allow the applicant’s family, friends and colleagues to be able enjoy these things and join them in their observance.

‘The proposed building would be a space truly ancillary to the main house, but apart from it in order to provide calm and separation.

‘The applicant has […] guests and visiting colleagues at [his home], people from around the world.

‘Many of these people are from many countries, faiths and customs, including for example the USA, Ireland, Ghana, Nigeria, Asia and Australia.

‘Thus, the applicant seeks to provide a space in which, he, his family and these different people can retreat for contemplation, prayer and relaxation, to meet celebrate and meditate in peace and safety from disturbance, when they visit.’

The application insisted that Sheeran was not looking to overshadow the village’s nearby medieval Church of England church.

It added: ‘Its design is reflective of shapes and forms that are familiar to all, allowing each person to interpret its symbolism freely in their own way, which reflects the principle of it being multi use and non-denominational.

‘It does not seek to follow or ape a previous building typology, but is an evolved form of the Suffolk vernacular, having echoes of round towers, mills, wind pumps and so forth.’

The building will have a lobby and a nave downstairs, with a spiral staircase to a small gallery, and a main space for activity, as well as a lead roof, flint walls and stained glass windows.

Sheeran has bought five houses to create his country estate, and is believed to have spent an additional £3million on extensive renovations, including building his own pub, tree house, underground music room and tunnels. He has also added his own wildlife pond, an outdoor kitchen and a football pitch, walled kitchen garden, an orchard, a mini paddock for chickens, goats and sheep and an entertainment area with a hot tub and fire pit.

In November 2019, it was reported that he may have to open his church to the public following a row with his local council. The millionaire music star lodged plans to open the boat-shaped ‘prayer retreat’ to be used as a private venue. But his local parish council then claimed that it would need to be publicly accessible for at least three years in order to be licenced.

Dennington Parish Council Clerk Lydia Kirk said at the time: ‘The applicant’s statement of need describes the use of the ancillary building as a potential venue for marriages, christenings etc. for family and close friends.

‘The parish council notes that additional licences would be required under the Marriages and Civil Partnerships (Approved Premises) Regulations 2005.

‘Which would require the licensed premises to be accessible and available for public use for a period of three years. As such, this proposed use would be out-with the scope of the current application which is for a private use ancillary building only.’

The star has been involved in several legal disputes over his rights and his neighbours’ rights to develop their respective property. In 2020 the singer’s neighbour, Anthony Robinson, won a battle against the superstar who had objected Mr Robinson to his plans to extend his back garden. Mr Robinson, who lives three houses along from the pop star’s estate, was given permission to make his back garden 160 feet bigger despite Sheeran’s objections. Mr Robinson wanted to boost the size of his garden, using part of a field that he owned at the rear.

But Sheeran did not want the space to be domesticated and claimed it would ‘extend the village into the countryside in an unplanned and artificial way’, despite his own much-publicised building projects. Although the council objected to Mr Robinson’s proposal initially many neighbours wrote in to support him and his plans were eventually approved. In June 2020, the singer had to fight to be able to keep the 16ft pub sign he had hung outside a barn converted into a drinking den.

Although he had been given planning permission for the pub in 2017, he had not been given permission for the sign which caused locals to question why it was there. Sheeran was also told he could not swim in his wildlife pond after he was granted permission to build it under the condition that it was used to provide a natural habitat for frogs, newts and dragonflies.

The council visited his property and specifically forbade ‘recreational leisure such as swimming’. He was also forced to remove his outside sauna, in a caravan next to the pond, after neighbours complained. Sheeran bought his first home in the site, a new build, for around £900,000 back in 2012.