Donald Trump says the 'horror' of coronavirus must be FORGOTTEN

President Donald Trump said Wednesday that the the coronavirus outbreak ravaging the nation ‘must be quickly forgotten’ – other than by those who lose a friend or family member.

The president made the exhortation online, on a day when US deaths due to the virus crept toward 13,000 – and the number of U.S. infections topped 400,000.

Trump has referred to the disease as a ‘scourge’ and as the ‘invisible enemy’ – even as he repeatedly talks about the need to reopen the country to allow the economy to function.

‘Once we OPEN UP OUR GREAT COUNTRY, and it will be sooner rather than later, the horror of the Invisible Enemy, except for those that sadly lost a family member or friend, must be quickly forgotten,’ Trump said. 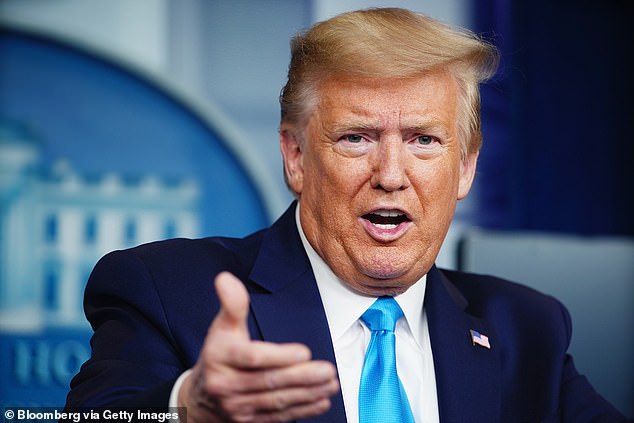 President Trump said the coronavirus outbreak must be ‘quickly forgotten.’ He made an exception for those how have lost a family member or friend

‘Our Economy will BOOM, perhaps like never before!!!’ he added.

Trump on Tuesday defended his weeks worth of reassuring statements that coronavirus was being contained even as it spread around the country.

‘The cases really didn’t build up for a while, but you have to understand, I’m a cheerleader for this country,’ Trump said. ‘I don’t want to create havoc and shock and everything else. But ultimately, when I was saying that, I’m also closing it down. I obviously was concerned about it,’ he said.

New York Demoratic Gov. Andrew Cuomo made comments Wednesday that said the nation should not return to ‘normal.’

‘It’s about learning from what we’ve experienced,’ Cuomo said in his daily briefing, amid some signs the nation’s worst outbreak may be leveling off.