Diabetic Weronica, 7, gets vital insulin thanks to YOU 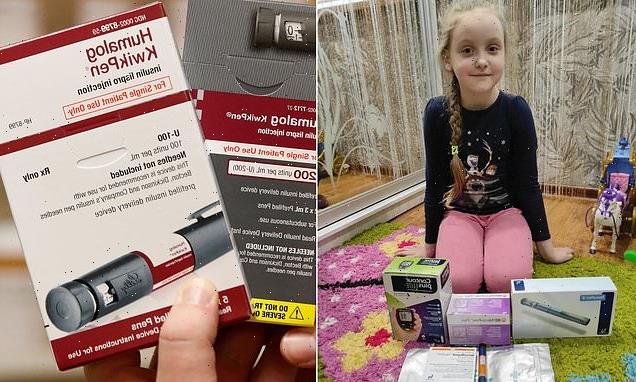 Diabetic Weronica, 7, gets vital insulin thanks to YOU: Red Cross medics arrange for emergency vials using funds from the Mail’s Ukraine Refugee Appeal

Trapped in Ukraine and with her vital supply of insulin almost exhausted, diabetic seven-year-old Weronica was in danger of falling seriously ill.

Thankfully, help was at hand from the Red Cross, whose work is partly funded by donations from generous Mail on Sunday readers.

Red Cross medics in Poland arranged for emergency vials of insulin to be delivered to Weronica, who was 170 miles away in the town of Dubno, and for a prescription that will provide her with a two-month supply of the drug.

‘She is so happy. She is so grateful for the help,’ said family friend Tatiana, 39, who appealed for assistance when she arrived at Przemysl train station in Poland, having left Weronica and her distraught mother behind in Dubno.

It took Tatiana two days to reach Poland, travelling by car, foot and train. She arrived at the border with two of her sons and her husband, a priest, who returned to Dubno with the insulin. 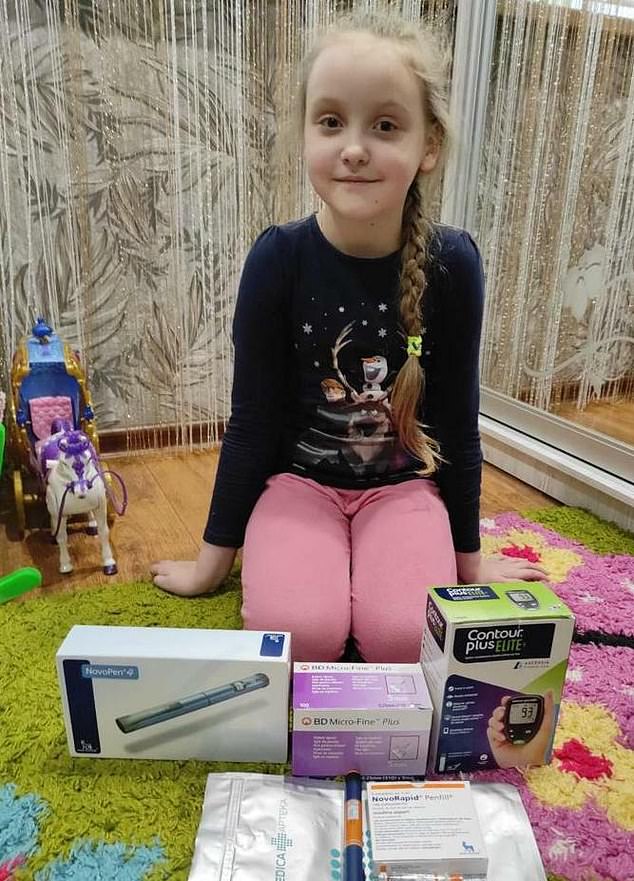 Red Cross medics in Poland arranged for emergency vials of insulin to be delivered to Weronica (pictured), who was 170 miles away in the town of Dubno, and for a prescription that will provide her with a two-month supply of the drug

‘My own children are safe now, so I must do all I can to help Weronica,’ Tatiana said.

‘My husband has taken the medications back to Ukraine. As a priest, he feels it is his duty to stand by the people of Ukraine.’

The record-breaking Mail Force Appeal has given the Red Cross £500,000 to support its efforts to get food, water, medicine and other essentials to those affected by the conflict. Readers have inundated the appeal with more than 70,000 cheques and a flood of online donations since it was launched five weeks ago. The total raised has reached a staggering £10.4 million.

The appeal was kick-started with a £500,000 donation from The Mail on Sunday and Daily Mail parent company, DMGT, at the personal request of chairman Lord Rothermere and his wife Lady Rothermere.

Like many of the four million refugees who have fled Ukraine, Tatiana described the terror of missile strikes. ‘We saw our neighbourhood bombarded. We were terrified. Especially the children. They saw missiles dropping from the sky.

‘We knew we had to go straight to the basement, but the children just froze. As soon as there was an opportunity to leave, we packed what we could carry and we ran.’

Mother-of-three Grazyna arrived at Przemysl with her 18-year-old son Marian on the same day as Tatiana. Marian is a student at the Krakow University of Technology in Poland but was trapped in Ukraine because he was visiting his mother when the fighting started.

He was twice refused permission to leave the country but was finally allowed to flee with Grazyna after Ukrainian authorities announced that those studying abroad could return to their studies.

‘I have never been so happy,’ Grazyna said. ‘I have two older daughters already studying in Poland so I know as soon as my son joins them they will be safe.’

By Scarlet Howes for the Mail on Sunday

Ukrainian women who fled Putin’s invasion are being trained to work as teachers in Polish schools so that they can help child refugees – thanks to Mail Force.

Olha Borodavka, 32, escaped from the north-west of her homeland a month ago with her seven-year-old daughter and ten-year-old son and is now teaching six-year-olds at a school in the Polish city of Lublin.

Speaking to The Mail on Sunday yesterday, she said: ‘On my first day a little boy came over to me and asked me if I was from Ukraine. When I said yes he started crying. I told him it was my mission to help him. The children wait for me every morning with a cuddle.’

Olha was hired as a teacher as part of a project involving Care International, which has received a £500,000 donation from Mail Force. She is one of 50 refugees who have found jobs in Lublin’s schools. ‘I am grateful to be accepted into the homes and lives of the Polish, but I need independence,’ she added. ‘This job has at least given me that and I am so grateful as otherwise I would have nothing.’ 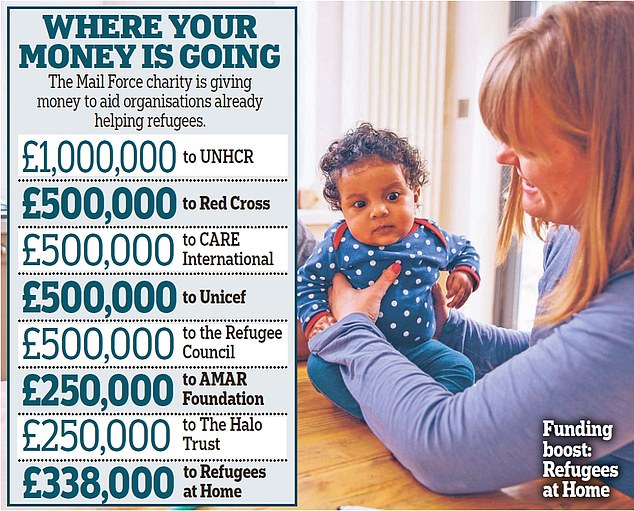 Care is working with its partner the Polish Centre for International Aid (PCPM) and various city councils. The women work six hours a day, five days a week and are paid the equivalent of £29 per day

Care is working with its partner the Polish Centre for International Aid (PCPM) and various city councils. The women work six hours a day, five days a week and are paid the equivalent of £29 per day.

A spokeswoman for the charity last night hailed the generosity of readers of The Mail on Sunday and Daily Mail, who have helped raise more than £10 million for Mail Force. ‘Thanks to the generosity of Mail on Sunday and Daily Mail readers, Care has partnered PCPM and municipalities like Lublin to hire refugee Ukrainian teachers in Polish schools,’ she said. ‘This not only gives the teachers a much needed income, but also helps Ukrainian children, who are often vulnerable and in some cases traumatised, to better integrate into school with Polish children.’

Tatiana Krasilnyk, 48, from Chernihiv, a town in northern Ukraine, fled the fighting in a truck with 26 other people.

‘I was with three other families – all teachers – during my journey,’ she said. ‘I am the only one who has a job. I am crying with gratitude.’

Natalia Pradko, 35, also from northern Ukraine, said her new job as a teacher was helping her ‘get back a sense of normality’.

She added: ‘It’s such a great opportunity for me but also for the children. They have someone to talk to in their native language about their emotions and feelings and us teachers can help them with understanding those thoughts.’

Another refugee teacher, Olha Snihur, 42, agreed that it is crucial that Ukrainian children who have fled to Poland are able to speak to others about their experiences.

‘They want to speak and communicate with Polish children, but they can’t and they are afraid. I can help them with that, which means the world to me. We aren’t just teachers, we are a bit of home.’