Denmark plans to slaughter up to 17 million farmed mink because a coronavirus mutation discovered in the animals that spread to humans, Danish Prime Minister Mette Frederiksen said Thursday.

She said the mutation could lower the effectiveness of a future vaccine.

“We have a great responsibility towards our own population, but with the mutation that has now been found, we have an even greater responsibility for the rest of the world as well,” Frederiksen said in a news conference, according to Reuters.

At least 5 cases of the new strain of the virus were found on farms and at least 12 in humans, Danish authorities said, according to Reuters.

Frederiksen said the slaughter would happen as soon as possible and would involve the armed forces, according to The New York Times. 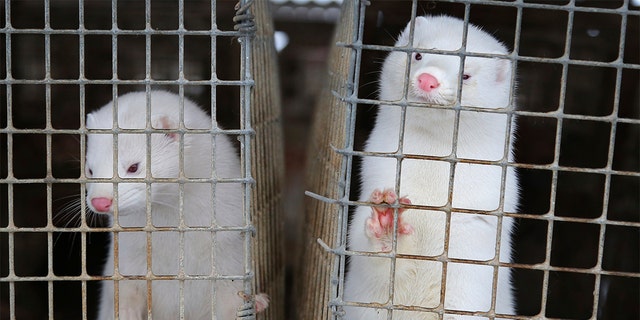 FILE – In this Dec. 6, 2012, file photo, minks look out of a cage at a fur farm in the village of Litusovo, northeast of Minsk, Belarus. Coronavirus outbreaks at mink farms in Spain and the Netherlands have scientists digging into how the animals got infected and if they can spread it to people. (AP Photo/Sergei Grits, File)

Denmark is the world’s largest producer of mink fur in the world, but there have been outbreaks at farms in other countries, including Utah last summer when five cases were found in two farms. The farms were subsequently quarantined.

Denmark shared its findings with the World Health Organization and the European Centre for Disease Prevention and Control, according to Reuters.

“We have been informed by Denmark of a number of persons infected with coronavirus from mink, with some genetic changes in the virus,” the WHO told Reuters. “The Danish authorities are investigating the epidemiological and virological significance of these findings.”

Outbreaks have persisted in farms across the country since the pandemic started.

“The worst-case scenario is a new pandemic, starting all over again out of Denmark,” Kare Molbak, director at the State Serum Institute, said, according to Reuters.

Frederiksen did not go into detail on the nature of the mutation, according to The Times.