For American ex-pats living in Australia, election parties have usually been occasions for popping champagne or dashed hopes.

But this time there was something darker at play – fear of the unknown. 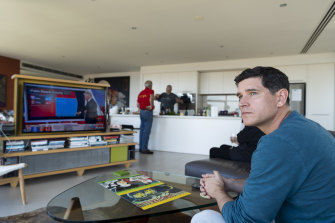 American expat Mark Connelly at a US election day party in Pyrmont.Credit:Rhett Wyman

By early afternoon, Joe Biden supporter Lizzie Strobel from New York was watching Florida turn red while surrounded by Australian Trump supporters betting on the election. Gathered with a crowd of expats at the Cheers Bar on George Street, she said watching the results come in was "nerve-racking". But her bigger concern was the threat of unrest and violence.

"It doesn't feel like a celebration at all," she said. "I feel lucky to be here instead but also a bit guilty and very very afraid for my country.

An independent voter from California who did not want her name published for fear of being "cancelled" on social media said she hoped President Donald Trump would win because of his position on immigration. 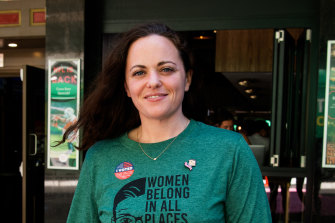 Democrat Shelah Wilkins at the Cheers pub in Sydney.Credit:James Brickwood

Shelah Wilkins, 36, who is from a Californian family of Trump supporters said her vote for Biden had caused much tension in her family. "It creates difficult conversations and very heated debates and a few hang ups on the phone," she said.

Ms Wilkins who lives in Sydney and works in the finance sector said she felt "a bit nervous" about the result.

"There's a lot more on the line this time," he said. "I always thought about returning to America. If Trump gets re-elected, I don't see any path for me to want to return." 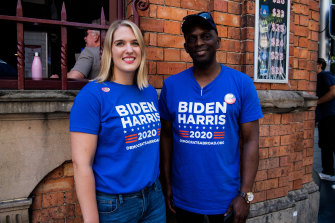 Laura Myers and Nathaniel Woodget at the Three Wise Monkeys in Credit:James Brickwood

American ex-pat Mark Connelly, who works as a communications consultant in Sydney joined friends at a party in Pyrmont to watch "the most polarising election in my lifetime". He left at 4.30pm uncertain of the result.

"You have democracy on the ballot," he said.

Simon Jackman from the US Studies centre at the University of Sydney said election parties had traditionally been happy celebrations of democracy.

"It's deadly serious this time. There is a sense of dread and foreboding," he said. 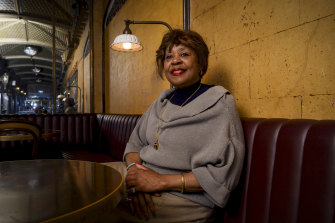 Former Democrat, Barbara Heineback, who worked for President Jimmy Carter and lives in Wollongong said Trump had done more for America in his first 47 months than Biden "has ever done in 47 years".

By late afternoon evangelical Christian and Biden supporter Jo Kadlecek from Boston was feeling optimistic, but admitted she had felt the same about Hilary Clinton in 2016.

She grew up in a Republican family but by her mid-30s started voting for the Democrats because "a lot more help for my neighbours was coming from Democrats than from those who were trying to promote 'family values'," Ms Kadlecek said.

"In this election I've had friends who've said they want to move to Canada or Australia if Trump gets re-elected."

Understand the election result and its aftermath with expert analysis from US correspondent Matthew Knott. Sign up to The Sydney Morning Herald‘s newsletter here, The Age‘s here, Brisbane Times‘ here and WAtoday‘s here.