Dramatic dashcam footage shows the moment a lorry slammed into a railway bridge and almost crushed a van.

The footage, captured in Epsom, Surrey on Friday May 21, shows a lorry collide with a low-hanging railway bridge before overturning and ploughing into a nearby delivery van.

The 20-second clip, shared by Surrey Police, has caused uproar on social media, where several people ‘automatically blamed the other [van] driver’ for the incident.

Twitter users were quick to point the finger at the Waitrose delivery van, accusing the driver of not giving way or causing the lorry to crash.

But sharing the footage which clearly shows no fault of the van driver, the force said: ‘For some reason, a lot of people automatically pointed the blame at the van driver.

‘Hopefully this clears things up for them.

‘Assume nothing, Believe no one, Confirm everything.’ 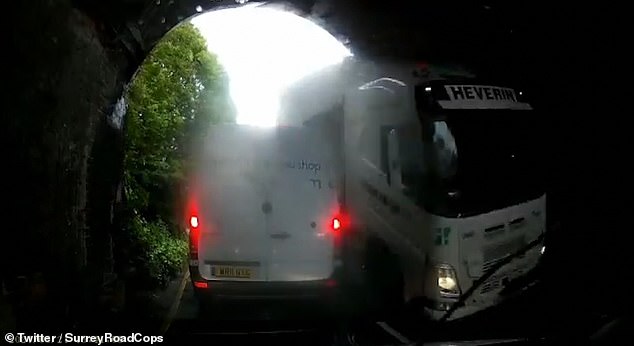 The footage, captured in Epsom, Surrey, shows a lorry collide with a low-hanging railway bridge before overturning and ploughing into a nearby delivery van 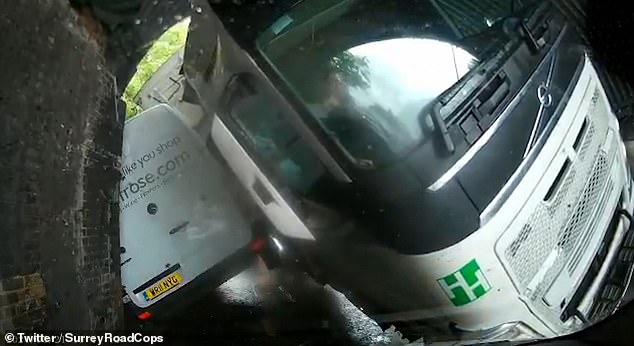 In the dashcam video, viewers can see a parked Waitrose delivery van waiting at the edge of the low-hanging bridge in Hook Road, Epsom as a large HGV approaches.

The cab of the lorry safely makes it under the bridge, but the trailer it is carrying slams against the roof of the bridge with an almighty bang, causing the lorry to jerk sideways and towards the van.

As the HGV makes contact with the bridge it starts to topple over and lands on top of the van.

The collision caused huge delays to motorists and commuters on the trains, with all routes in and around the bridge blocked for over three hours.

No injuries were reported at the time of the incident.

Social media users were left shocked at the footage, with some of those commenting questioning the drivers’ qualifications. 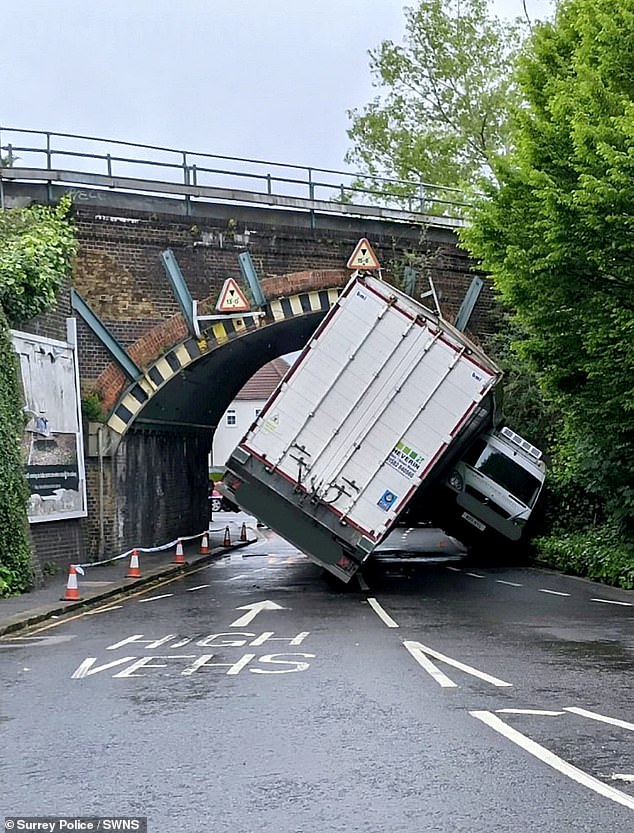 The collision caused huge delays for motorists and commuters on the trains, with all routes in and around the bridge blocked for over three hours

One Twitter user wrote: ‘Prosecutions required. The standard of “professional” drivers in this country is appalling.

Andrew Briers said: ‘Vision before decision. Surely the LGV should have already seen the height restriction and that he was not going to get through.

‘There lies the problem. And the cause of the collision. Driving without due care. Next stop, court.’

Surrey Police and Heverin Haulage have been contacted for comment.