Chicken, eggs, rice, beans, soap and other items to be sold in limited quantities as the US tightens trade embargo. 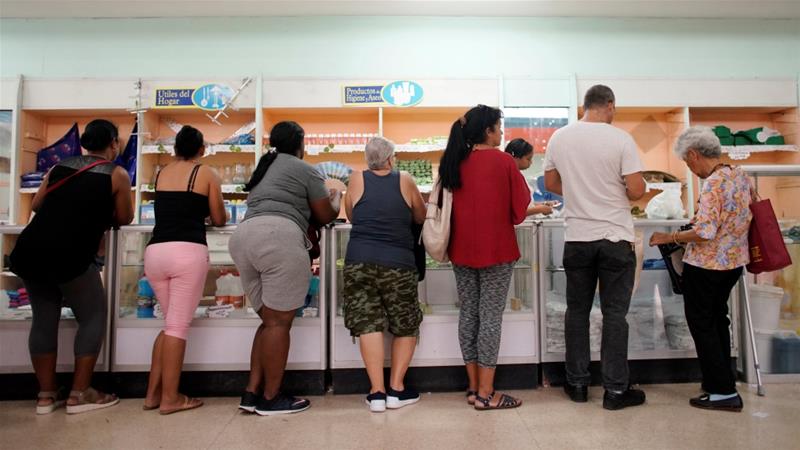 Cuba has announced it is rationing staple foods and hygiene products due to shortages which it partly blames on the tightening of a trade embargo imposed by the United States.

Faced with a grave economic crisis, the Cuban government says it will control and ration the sales of chicken, eggs, rice, beans, soap and other essential items.

Commerce Minister Betsy Diaz told the state-run Cuban News Agency on Friday that various forms of rationing would be employed in order to deal with the shortages.

“Our mission is to fracture all the measures the US government imposes, and today we are setting priorities,” Diaz said on the midday state-run news broadcast.

“We’re calling for calm,” Diaz said, adding that Cubans should feel reassured that at least cooking oil would be in ample supply. “It’s not a product that will be absent from the market in any way.”

Cuba, home to nearly 11 million people, imports roughly two thirds of its food at an annual cost of more than $2bn and brief shortages of individual products have been common for years.

A handful of agricultural reforms in recent years have failed to boost output in its inefficient, centrally planned economy, which also suffers from a decades-old US trade embargo.

But a decline in aid from key ally Venezuela and lower exports have left it struggling to find the cash to import. More US sanctions since Donald Trump became president have worsened its liquidity crisis. 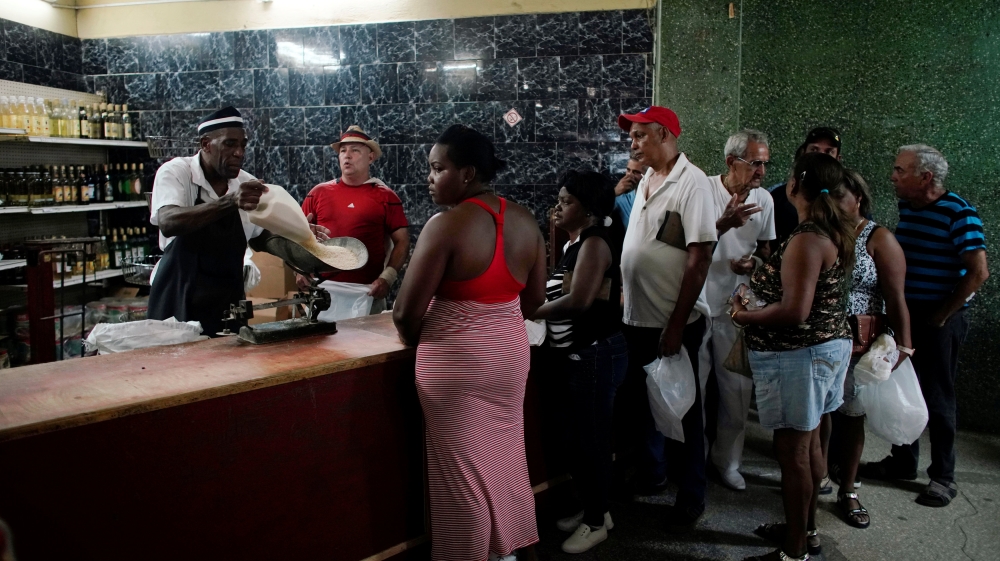 Shop shelves on the Caribbean’s largest island have been increasingly empty of late with a scarcity of basic products such as eggs, flour and chicken, and massive, hours-long queues for them whenever they come into stock.

Cubans have been flooding social media with photos of the queues they are in, under the hashtag #lacolachallenge (queue challenge) to highlight the problem.

Many shoppers find themselves still standing in line when the products run out, a problem the government has been blaming on “hoarders”.

“The country’s going through a tough moment. This is the right response. Without this, there’ll be hoarders. I just got out of work and I was able to buy hot dogs,” said Lazara Garcia, a 56-year-old tobacco-factory worker.

Manuel Ordonez, 43, who identified himself as a small business owner, said the new measures would do nothing to resolve Cuba’s fundamental problems.

“What the country needs to do is produce. Sufficient merchandise is what will lead to shorter lines,” he said.

Limited rationing of certain products has already begun in many parts of the country, with stores limiting the number of items like bottles of cooking oil that a single shopper can purchase.

Food stores in Cuba are government-run and sell products ranging from highly subsidised to wildly overpriced by global standards.

The Communist country introduced a series of reforms around a decade ago in the hope of opening up and boosting the economy, which is one of the world’s last Soviet-style command economies.

However, that reform drive has tapered off in recent years partly due to discontent with some of its consequences such as rising albeit still low inequality and less state control.

The move on Friday represents a setback to one of the proposed reforms, to end the universal rationing system, introduced just after the 1959 revolution.