It is fitting that Paddy Garritty, who died on August 16, aged 83, had the last laugh. First it was cops; a couple of hours later it was army blokes in camo gear – all demanding to see him and make sure he was isolating at home. Who would be next? ASIO?

While these demands bemused his devoted partner of 35 years, Mary Price, it might not have surprised Comrade Paddy whose history as a known leftie, meant his name and address would have appeared on more than a few files. But they were way out of date for the covid contact tracers ­for more than three years he had been at a western suburbs nursing home, where he had recently tested positive.

The first thing you noticed about Paddy Garritty were his eyes. They were deep twinkling pools, reflecting light and drawing you in. They revealed the depths of Paddy’s emotions, passions and commitments. Irish eyes.

That and his infectious enthusiasm and humour.

You would see him walking towards you along the long corridor at Trades Hall and as he drew closer there would be the boyish smile, the little skip and the Irish heel click. You couldn’t help but smile.

Tim Coldwell, founding member of Circus Oz recalls Paddy assessing the big top canvas which needed replacement in about 1990. “I heard a rip and looked up. There was Paddy, upper torso still on top of the tent but his legs were dangling through the rip, nine metres above the ground. He was laughing his head off.” Paddy worked as a much-loved rigger and logistics man for Circus Oz for many years, touring the UK and the US. 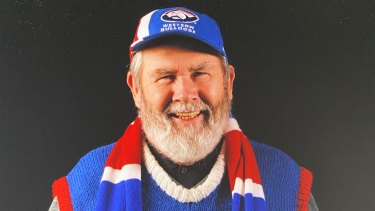 Paddy was a most passionate person man. Passionate about injustice, the arts, First Nations cultures, the Trades Hall building, circus skills (Women’s, Oz and Fruit Fly), the West, fishing, the ALP and much more.

He would greet you with “I’ve got the best partner in the world. I just love Mary so much”. He meant it. They met at a party in Fitzroy after a Palm Sunday rally in the mid-’80s, moving in as a boarder and never left.

Paddy was also fearless, or outrageous, depending on your perspective. Who else would have scaled the high back wall of the Melbourne Club and appeared briefly, waving a clenched fist from inside the front windows, to the huge crowd protesting outside in the early ’80s ­– just before he was clobbered by security? Who else would have run naked through the Nike CBD store with only a sign to cover his dignity, drawing attention to corporate exploitation of workers?

Whether it was a place to get posters printed or to hire a sound system for a 100,000-strong rally, Paddy always found a way to save the day.

Born near Newcastle, UK, in 1937 with Irish ancestry, his family migrated to Melbourne in 1951.

He was a mechanic and then a seaman on the coastal trade, mainly to Tasmania.

Paddy’s politics were gritty, it was about doing the right thing and about real solidarity. He leaned towards the Communist Party in his early and middle years when the CPA was bigger and more influential, before its eventual demise in the mid-1980s. CPA stalwarts like Meatworkers Union secretary George Seelaf and Metalworkers official Max Ogden were his heroes. In the ALP left camp was George’s successor, Wally Curran.

For Paddy, broad left politics wasn’t about a set ideology or Party.

He had battles of his own of course. He stopped drinking in his middle years.

Giving up the grog increased Paddy’s energy to do good; first in Hobart establishing the Unemployed Workers Union in the late ’70s, then back in Melbourne to run a health food shop for those down on their luck.

In 2013 he told the Footscray Community Arts Centre how he got involved in the mid-’70s to help found the organisation:

“I was in the pub with George [Seelaf], Max Odgen and Wally Curran … and George said, the unions are on the wrong track, they only think about wages and conditions, but they don’t give a damn about the quality of life and the culture of the working class people. It is not only having arts and culture inside the factory gates, but also, outside, for workers and their families.”

As Footscray CAC said in their tribute: “Paddy is the connecting thread that draws together the union arts practices lead by George Seelaf, and the counter-cultural orientation of the Pram Factory and Melbourne comedy scene around John Pinder and Rod Quantock.”

Max Ogden recalls meeting Paddy. “In 1974, as the first fulltime VTHC Arts Officer, I was working in attic of the Trades Hall. This little cheeky guy literally bounced up the stairs and lit up the large old room, along with three Koori friends, who sang as the Kooriers. We immediately became great friends until the day he died. With the little funds I had available, we immediately arranged for The Kooriers to do a series of lunch time concerts at various workplaces.”

As arts officer at the naval dockyard in the mid-1980s; as arts officer at Trades Hall in the early 1990s and as the founder of Union Promotions in the late ’90s, Paddy worked tirelessly to promote the transformative power of art.

He believed that working people deserved art, as much the rich and powerful. At its best, art could open new worlds for those who jumped in – it wasn’t just about a passive consumer experience, but a potential renaissance for each individual.

Paddy himself loved to write and in his 60s developed his talent through a creative writing course at RMIT University and by publishing short stories.

But Paddy wasn’t against entertainment for a cause either. Paddy was behind the Labour Day Concert at the Arts Centre in the ’80s and ’90s, which came out of a deal the building unions did with the Victorian government during the building of the Arts Centre. Every year the unions would have access to the Concert Hall, free of charge, to put on a concert for unionists and their families. Paddy made it happen. Nothing was too good for the workers.

For 20 years from the early ’90s Paddy was responsible for building a vibrant arts and events culture at the Trades Hall. He convinced then VTHC secretary Leigh Hubbard to open the building up to the public as a community and political hub. He nurtured relationships with the Comedy Festival, Melbourne Fringe, Melbourne Workers Theatre and numerous others. Paddy’s bar in the Old Ballroom became synonymous with the Trades Hall.

As current secretary Luke Hilakari told ArtsHub: “People come to make art, watch art, and be part of art. It’s never just been art for art’s sake; with Paddy’s guidance, it’s always been art with impact and a message.”

In those two decades every major union and community event involving large crowds started at or near Trades Hall ­­­– from the WorkChoices and Your Rights at Work campaigns, East Timor, the Patricks dispute, the Iraq War campaign through to the annual Union Race Day. Paddy was particularly proud of his role in organising the Nelson Mandela welcome in 1990 at the Melbourne Town Hall. Every event had Paddy’s footprints all over it.

As David Bridie said: “In the stairway that leads to the first floor in Trades Hall there are deep hollows worn into the bluestone tread, millions of footsteps over time. At the top of those stairs was Paddy; from his small office came the cry; ‘comrade’ followed by a crushing hug, with beard. He served the cheapest beer in Melbourne and never wavered in his passion for politics, the arts, and the Western Bulldogs.”

Paddy wasn’t all about politics and the arts. He loved dearly his four children with first wife Maureen,­ Terri, Tony, Sean and Joanne­ and he was an equally loving stepfather to Mary’s children Megan, Caroline and Mathew.

Comrade Paddy is gone, but he will never be forgotten.

With contributions by Leigh Hubbard, David Bridie and Madge Fletcher.

Leslie Marshall: Biden must do these things to defeat Trump in debate