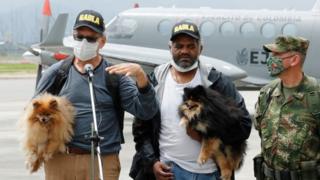 The Colombian army has rescued two tourists who were abducted three months ago by dissident guerrillas.

The Swiss and Brazilian tourists were freed after soldiers located them, also capturing a suspected kidnapper.

In mid-March, Daniel Max Guggenheim and Jose Ivan Albuquerque were kidnapped by armed dissidents from the former rebel Farc movement, the army said.

“He told us we’d reached the cemetery,” Mr Guggenheim said when recounting their abduction.

How were they abducted?

The tourists were travelling through the Cauca department when a gunman pointed a weapon at their vehicle. They were then kidnapped along with their two dogs.

The army’s anti-kidnapping unit said the kidnappers were part of the Dagoberto Ramos Mobile Column. The rebels were demanding tens of millions of pesos.

Despite being put through cold temperatures and mockery by their captors, the men said they were not physically harmed. The rebels even travelled to purchase food for the dogs.

The men were moved regularly and stayed at 11 different locations.

How were they rescued?

Exact details are not clear but the pair was rescued with their dogs during a military operation. The anti-kidnapping unit said it also captured one of their captors.

“We survived,” Mr Guggenheim said. “It’s been more than a month and a half since we spoke to our families. It was hard.”

“A million thanks to Colombia,” he added. “I love the country in spite of everything.”

Who are the Farc?

The Revolutionary Armed Forces of Colombia, Colombia’s largest rebel group, were founded in 1964 as the armed wing of the Communist Party and follow a Marxist-Leninist ideology.

Their main founders were small farmers and land workers who had banded together to fight against the staggering levels of inequality in Colombia at the time.

The group signed a historic peace accord in 2016 after four years of negotiations. It has since formed a political party, which is also called Farc