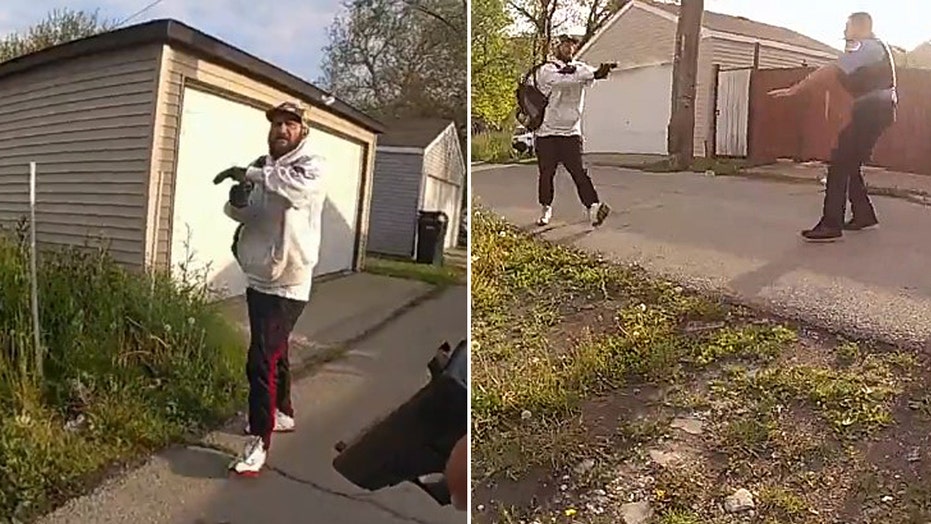 More than 50 kids in the Windy City have died from gunfire this year. Alderman Anthony Napolitano with insight.

Chicago Police have released shocking bodycam video showing a shooting suspect pulling out a gun and firing at officers, leaving two cops, and their attacker, wounded.

The Chicago Police Department (CPD) on Thursday released a nearly three-and-a-half minute video montage of the May 16 shooting, including the moments when the suspect – who had been ignoring officers’ demands to “drop the gun” and stop for them – fired point-blank at one of the officers.

Police were responding to a report of shots fired shortly before 7:20 a.m. on Chicago’s West Side.

The new video is a compilation of several clips provided Wednesday by the city’s Civilian Office of Police Accountability.

The CPD video begins by showing the suspect walking along the sidewalk wearing a white sweatshirt that covers his head at parts of the clip. It then shows another person, identified by police as the victim, across the street from the suspect.

The suspect walks out of the camera’s view and, seconds later, the sound of at least one shot being fired can be heard.

The video then cuts off to police trying to stop the suspect. Despite officers’ multiple attempts to get him to stop or to get his attention, he keeps walking. Police can be heard repeatedly telling him, “Drop it!”

The officers keep following the suspect as he walks alongside a building and into an alleyway, where a police vehicle intercepts him, the footage shows.

A different officer’s body-worn camera provides the view of the cops who arrive in the vehicle and block the suspect’s path.

The second officer exits the police car with his gun pointed and yells, “Get your hands out of your pocket.”

“Dude, stop,” the officer continues as the suspect moves closer to him. “Get your hands up. Come on.”

But instead, the suspect brandishes his gun and points it directly at the officer before shots are heard being fired repeatedly. The officer’s bloodied hand can be seen in the camera’s view.

Another camera shows the shooting from a different view, and further shows how a second officer collapses to the ground after he, too, is wounded.

Police fired back and struck the suspect, whom the Chicago Sun-Times identified as Bruce Lua, 45.

All three of the wounded individuals survived their injuries. One officer was shot in the shoulder above his protective vest and in the hip, while the other suffered a gunshot wound to his hand. Both were released from the hospital later that day.

“This offender had no regard for their position as police officers. No regard. And began trying to kill them,” Police Superintendent David Brown said during a press conference at the time. “Let’s be clear. This offender turned and immediately tried to kill these officers, by firing a gun and hitting both of them.”

On Thursday, he captioned the CPD video compilation of the shooting with the words, “Bravery and courage.”

Lua was charged with attempted murder, unlawful use of a weapon and aggravated battery after the shooting and bail was set at $10 million, the Sun-Times report. He had reportedly previously been convicted and had been awaiting trial for previous misdemeanor assault charges at the time.

If you’ve got a tip, you can reach Stephanie Pagones at [email protected]