More than 1,000 people were inside the Amstor shopping centre in Kremenchuk, central Ukraine, when it was hit by Russian missiles on Monday.

Many were able to escape, but at least 18 people were killed in the strike, and dozens more injured.

The attack sent giant plumes of black smoke, dust, flames billowing into the air and reduced large parts of the building to rubble.

Now, CCTV footage has emerged which captures the moment people dived into a nearby lake fearing for their lives, as debris from the mall rained down around them.

Cameras which appear to be focused on a nearby park show a man and woman running around a lake when suddenly the picture starts shaking and the couple flee. 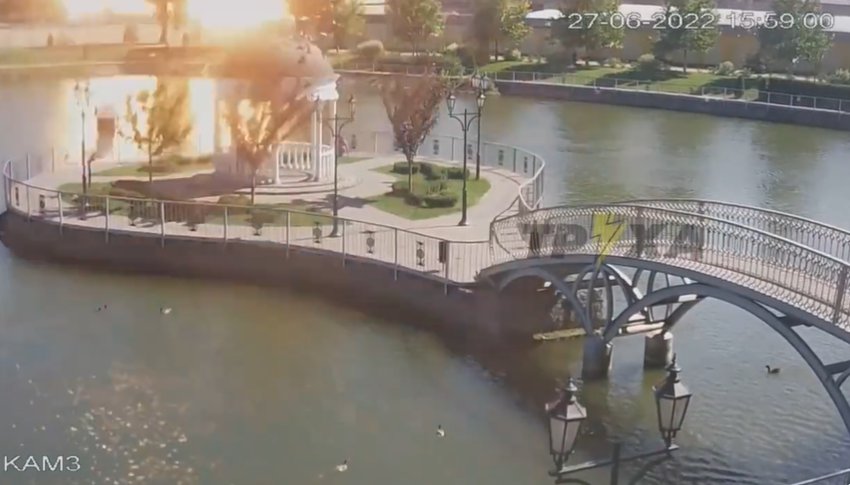 A large shadow comes across the sunny area, and debris starts falling from the sky as the man dives into the lake for safety and the woman sprints away from the direction of the shopping centre

Other cameras in the park showing adults picking up children and running to safety, as flashes from the missile strike can be seen.

The attack in Kremenchuk has been condemned as ‘abominable’ by world leaders while Ukraine’s president has called it ‘one of the most daring terrorist attacks in European history’.

Mr Zelensky said the shopping centre presented ‘no threat to the Russian army’ and had ‘no strategic value’.

He accused Russia of sabotaging ‘people’s attempts to live a normal life, which make the occupiers so angry’.

In his nightly address, he said it appeared Russian forces had intentionally targeted the shopping centre and added: ‘Today’s Russian strike at a shopping mall in Kremenchuk is one of the most daring terrorist attacks in European history.’

He said Russia ‘has become the largest terrorist organisation in the world’.