Catalan leader on trial: 'I am a political prisoner'

Oriol Junqueras, former vice president of regional Catalan government, is on trial for rebellion in Madrid. 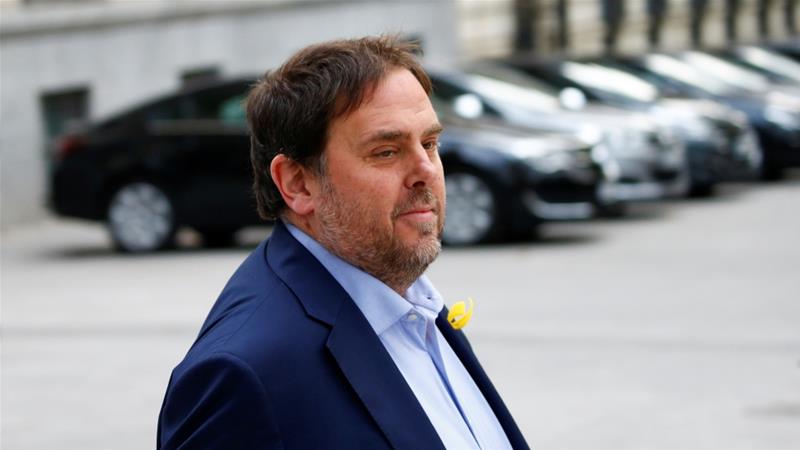 The foremost Catalan separatist on trial in Spain’s Supreme Court refused to answer questions from the prosecution on Thursday, calling the trial a “judgement of ideas.”

Oriol Junqueras, the former vice president of the regional Catalan government, said he is “being persecuted for my ideas and not for my actions … I will not answer questions from the accusers.”

Junqueras is accused of rebellion and embezzlement in relation to an October 2017 independence referendum viewed as illegal by the Spanish government, and pushing forward with the referendum in spite of understanding the “grave risk” of violence related to it. He faces up to 25 years if convicted on the charges.

“I consider myself to be a political prisoner,” said Junqueras, in response to questions from his own lawyer.

The 11 other accused in the politically charged trial which got under way on Tuesday include members of Catalonia’s former executive, the two leaders of the powerful pro-independence associations ANC and Omnium Cultural, and the former president of the Catalan parliament.

They could face jail terms of seven to 17 years.

It was the first time Junqueras has spoken publicly since he was imprisoned following Catalonia’s failed 2017 independence declaration.

As he began speaking, Junqueras said it was a pleasure “to speak Castilian,” referring to the historical name of the Spanish language “after a year a half of forced silence”.

Spain’s Supreme Court denied petitions from the former vice president and 11 more Catalan leaders to allow the defendants to speak in Catalan, their native language, before Junqeras’s testimony began.

Manuel Marchena, a judge on the court, said allowing the defendants to speak in Catalan would interfere with the understanding of others in the court who did not have access to the translation provided by headphones.

In total, nine defendants have been charged with rebellion. They have all been in pretrial detention for months, some of them for more than a year. The three others are accused of disobedience and misuse of public funds. 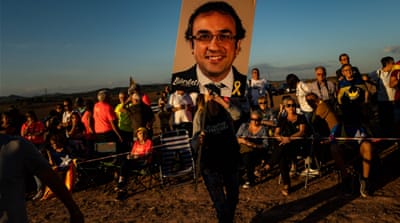 Under Spanish law, rebellion is defined as “rising up in a violent and public manner”. But a key question is whether there actually was any violence.

Prosecutors point to “violent incidents” during protests orchestrated by two grassroots groups in the lead-up to the referendum.

Activists surrounded a Catalan economy ministry building in September 2017, while national police carried out a search inside to try to stop the vote from going forward.

The defendants deny that the referendum drive was carried out in a violent manner. They point to violence by police who raided voting stations on the day of the referendum.

Junqueras said in court that he and his fellow accused never condoned violence and that “nothing we’ve done is a crime.”

Carles Puigdemont, Catalonia’s former president who fled Spain days after the independence declaration on October 27, is not among the defendants.

Spain does not try suspects in absentia for major offences.