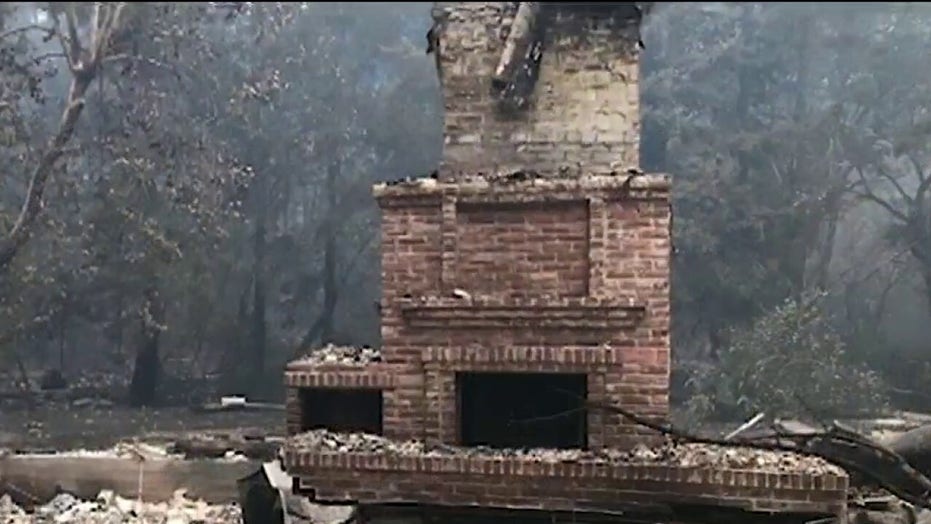 Nearly four million acres have burned in California so far this year as the state enters the most dangerous month of fire season on Thursday, amid dozens of ongoing wildfires that may be fanned by more treacherous weather in the days ahead.

The National Weather Service said red flag warnings are in effect along the California coast, with the combination of unseasonable hot weather and gusty winds creating conditions for rapid fire spread.

"Unfortunately it's not feeling like October across portions of the West, so that's kind of fueling these fires," Fox News meteorologist Adam Klotz said on "Fox & Friends First." "Extreme heat is going to be lingering here the next couple of days."

Cal Fire said Wednesday night the Glass Fire burning through Napa and Sonoma Counties has scorched some 51,266 acres and is only 2% contained. 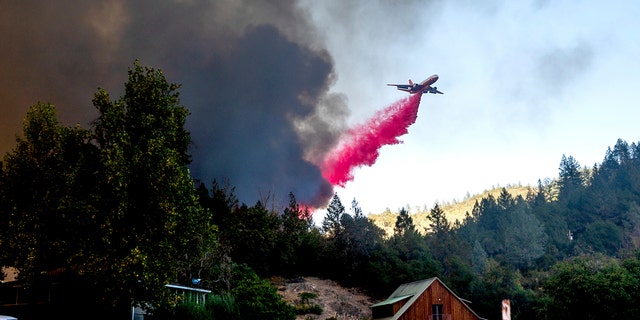 More than 70,000 people are under evacuations orders in the state's famed wine region north of San Francisco, where the blaze has scorched at least 143 homes along with winery installations and other buildings. Over 26,290 structures are threatened by the blaze. 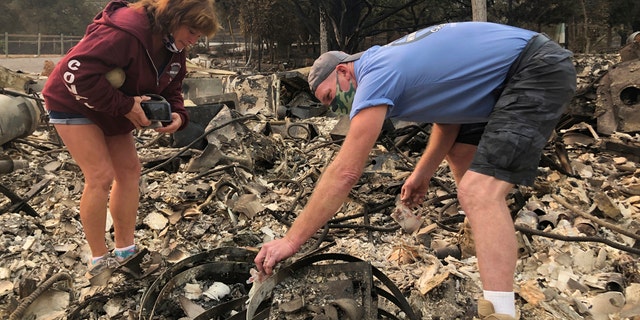 Kevin Conant and his wife, Nikki, sift through the debris of their burnt home and business "Conants Wine Barrel Creations," after the Glass/Shady fire completely engulfed it, Wednesday, Sept. 30, 2020, in Santa Rosa, Calif.
(AP Photo/Haven Daley)

Those who have not yet been ordered to evacuate their homes have been told to be on "high alert" in the days ahead, as the winds could push the flames further.

Flames were continuing to tear through the region's rolling pastures and tree-dotted hills, toppling renowned wineries and restaurants. 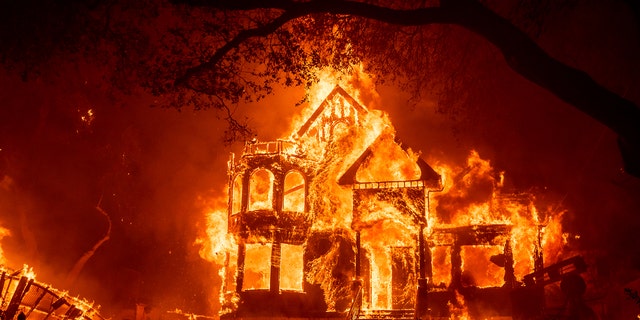 “Every time we try to construct some control lines, the fire is outflanking us, so we have to pull back," Cal Fire Chief Mark Brunton said Wednesday.

Officials said they were requesting more fire crews to join 2,000 firefighters battling the blaze that has charred 80 square miles. 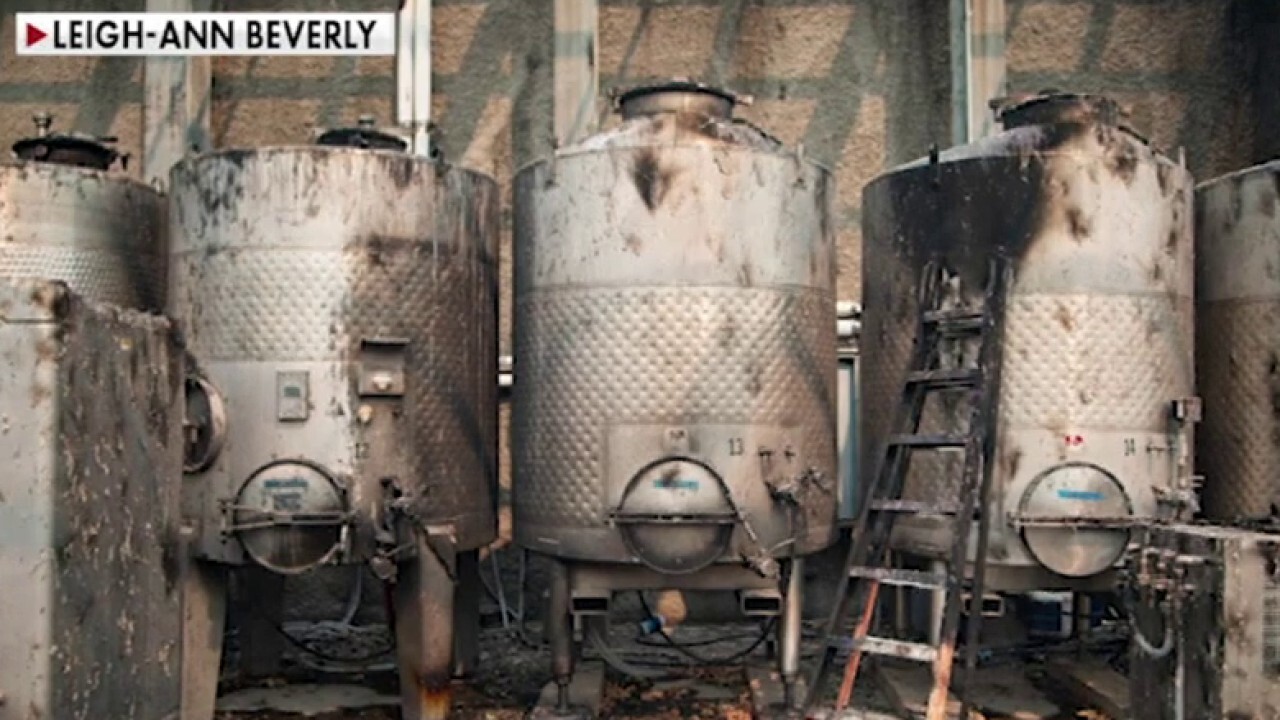 Wineries in California ravaged by wildfires

Authorities are still investigating what started the Glass Vite, but have focused on a remote vineyard in St. Helene, KTVU reported on Wednesday. Neighbors told KTVU they saw flames erupt from the area when the fire first ignited early Sunday morning.

“I know our investigators are out there currently trying to track down and eliminate all the things that didn’t start it and figure out what it was that did,” Cal Fire spokesperson Robert Foxworthy told KTVU.

Officials revealed on Wednesday the danger of the wind-whipped flames, saying that two firefighters had to deploy the emergency fire shelters they carry in case of imminent danger from flames

The firefighters were assigned to the Glass Fire in Napa County on Sunday when gusty off-shore winds fanned the fire, forcing them to deploy the shelters after flames overwhelmed them.

The firefighters covered themselves on the ground with the space blanket-looking devices. They were not injured, the California Department of Forestry and Fire Protection said. It was the third time in September fire crews have had to deploy their fire shelters — a last-resort effort to save their lives that was once uncommon.

The footage from Wednesday shows several clips of firefighters tackling flames and driving through extreme conditions in Napa County.

The Glass and Zogg fires are among nearly 30 wildfires burning in California. Fire-related deaths in California this year total 30 so far.

The fires this year have far surpassed the previous modern record of 1,975,000 acres in 2018 in the amount of acreage burned.

“You look at the statewide fire map, and you say how can that be?” Cal Fire spokesman Scott McLean told the East Bay Times. “How can that happen? Is that the fault of anybody? Not specifically. We had major lightning storms last month. This is like 10 years all rolled into one.”

A mid-August heat wave combined with rare lightning storms ignited many of the blazes, including one that's become the state's largest. Five of the largest wildfires in California history have occurred this year.

Numerous studies in recent years have linked bigger wildfires in America to global warming from the burning of coal, oil, and gas, especially because climate change has made California much drier. A drier California means plants are more flammable.

In the northern part of the state, the Zogg Fire, which erupted during high winds on Sunday, has been blamed for another death.

Shasta County Sheriff Eric Magrini said a man who was evacuated with severe burns Sunday died at a hospital of his injuries Tuesday. Three others died Sunday.

The deadly blaze that spread to neighboring Tehama County has burned 86 square miles and destroyed 146 buildings, about half of the homes. It was 9% contained as of late Sunday. 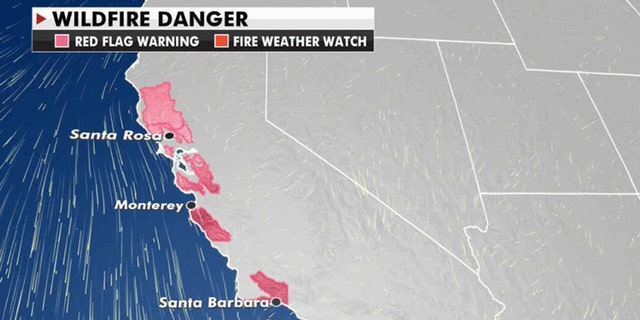 Some Northern Californians said they are getting fed up with the annual evacuations and fire fears and are thinking of leaving. Others, like Nikki Conant, said Wednesday she can't think of living anywhere but the Santa Rosa area.

“This is home,” she told the Associated Press. “I was born and raised here, my family is here. I don’t have the heart to just give up and leave the area.”