During two grueling days of questioning over her Supreme Court confirmation, Judge Amy Coney Barrett did her best to avoid controversy. But her efforts to play it safe on the subject of climate change have created perhaps the most tangible backlash of her hearings.

In her responses, the nominee to take the place of Ruth Bader Ginsburg, an environmental stalwart, used language that alarmed some environmentalists and suggested rough going for initiatives to fight climate change, if as expected she wins confirmation and cements a 6-3 conservative majority on the court.

On Thursday, the last of four days of confirmation hearings, Republicans on the Senate Judiciary Committee set a committee vote on Judge Barrett’s nomination for Oct. 22 hoping to speed a final vote to as soon as Oct. 26 — one week and a day before Election Day.

As she did on judicial matters, such as her views on Roe v. Wade, Judge Barrett declined to state her thoughts on climate change in exchange after exchange this week, equating her evasions to the well-established precedent of refusing to comment on issues that could come before the court.

But with Senator Kamala Harris of California, the Democratic candidate for vice president, Judge Barrett, the daughter of an oil executive, went further. She described the settled science of climate change as still in dispute, compared to Ms. Harris’s other examples, including whether smoking causes cancer and the coronavirus is infectious.

“Do you believe that climate change is happening and threatening the air we breathe and the water that we drink?” Ms. Harris asked.

Judge Barrett responded, “You asked me uncontroversial questions, like Covid-19 being infectious or if smoking causes cancer” to solicit “an opinion from me on a very contentious matter of public debate,” climate change.

“I will not do that,” Judge Barrett concluded. “I will not express a view on a matter of public policy, especially one that is politically controversial.”

Republicans showed no sign of discomfort with that answer. But her performance raised alarm bells around the world. Greta Thunberg, the young Swedish climate activist, took to Twitter to quip, “To be fair, I don’t have any ‘views on climate change’ either. Just like I don’t have any ‘views’ on gravity, the fact that the earth is round, photosynthesis nor evolution.”

“But,” she continued, “understanding and knowing their existence really makes life in the 21st century so much easier.”

Michael Gerrard, the founder of the Sabin Center for Climate Change Law at Columbia University Law School, said her “non-answer on global warming” does not necessarily put her in the climate denial camp; it could have been “reflexive stonewalling.” But, he said, “it’s driven people up the wall.”

It was not just the exchange with Ms. Harris. On Tuesday, in a friendlier give-and-take with Senator John Kennedy, Republican of Louisiana, Judge Barrett fell back on the excuse that “I’m certainly not a scientist,” when asked her views on a warming planet. That might sound bland, but it closely tracks the language used by Republican lawmakers who oppose action on climate change or deny the science outright.

And stating “I would not say I have firm views on it” in the face of so much evidence of climate change in daily life, as Judge Barrett did, is controversial.

“She’s a smart and sophisticated person,” said Richard L. Revesz, director of the institute for policy integrity at New York University Law School. “If she didn’t want to associate herself with the climate denial perspective, she could have used different words.”

White House spokesman Judd Deere, in response to questions about Judge Barrett’s two days of hearings, said, “During her 20-plus hours of testimony, Judge Barrett made clear what she committed to the American people the day she was nominated: ‘Judges are not policymakers.’” 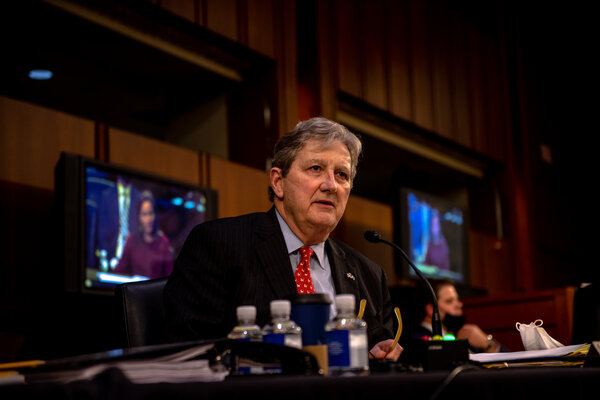 And it was not at all clear why she insisted on not answering whether climate change was real, said Ann Carlson, who is a director of the Emmett Institute on Climate Change and the Environment at the U.C.L.A. School of Law. Professor Carlson said Judge Barrett implied that stating a scientific fact could somehow be prejudicial to future high court deliberations, yet she was willing to state other obvious facts that have borne on litigation, such as cigarette smoking causes cancer.

Alex Flint, a former senior Republican Senate aide who was involved with more than 70 federal government confirmations, said he understood Judge Barrett’s actions. “None of the Democrats are going to support her, regardless of how she answers the question,” he said, so her answer was crafted to ensure she did not alienate the Republican senators she needs.

However, Mr. Flint, who now leads a Republican group to address climate change, the Alliance for Market Solutions, added that her response on climate may look like smart politics today, but it is not necessarily good for the future of the party, which needs “to build credibility, especially with young and college educated voters whose role in elections is growing.”

A Justice Barrett could have real effects on efforts to address climate change.

The prior jurisprudence is clear. In the 2007 case Massachusetts v. the Environmental Protection Agency, the Supreme Court declared that greenhouse gases are covered under the Clean Air Act and that the agency can act to counter climate change. In 2009, the E.P.A. issued what is known as the “endangerment finding,” which said that greenhouse gases endanger public health and welfare. That finding was challenged in the courts and survived: the Court of Appeals for the D.C. Circuit upheld the finding in 2012, and the Supreme Court declined to review the lower court’s decision, allowing it to stand.

If President Trump were to win a second term, Professor Revesz said, the government could withdraw the endangerment finding, and the inevitable court challenge could bring the fundamental question of climate change back before the Supreme Court.

There is also the question of how Judge Barrett would approach regulatory matters. Professor Carlson suggested that Judge Barrett would seek to interpret the E.P.A.’s powers narrowly. Other conservative members of the Supreme Court have indicated a willingness to revive a legal doctrine that holds that Congress should not give regulatory agencies much leeway in executing policies. With six votes, the conservative bloc could tie the hands of regulators.

“The future of the administrative state, in many respects, is on the line — and her refusal to answer basic questions about things like climate science makes me worry that we could see a whole dismantling of agencies that we have come to rely on for environmental protection,” she said.

Limits on administrative power would leave Congress with the task of being much more specific in drafting environmental legislation, Professor Gerrard said. “A very specific, well crafted law by Congress would be very hard for the courts to get around,” he said. Yet narrowly crafted laws don’t always adapt well to changing circumstances, as the years pass.

Leaving statutes vague, however, has been a way for Congress to finesse fights. A demand for specificity would make passage of environmental legislation even harder than it is now.

Her father, Michael E. Coney, worked as a prominent attorney at Shell Oil in New Orleans and Houston for 29 years, from 1978 to 2007, focusing on deep sea exploration and drilling in the Outer Continental Shelf. As part of his work, he represented the oil and gas giant before the federal government, frequently dealing with the Department of Interior on royalties, regulations and compliance issues.

Mr. Coney was also an active member of the powerful oil and gas trade organization, the American Petroleum Institute, twice serving as chairman of its Subcommittee on Exploration and Production Law. On top of being the industry’s main lobby group, A.P.I. has played a critical role in casting doubt on climate science and opposing policies to address climate change.

Stephen Gillers, a professor at the New York University School of Law, said Judge Barrett was likely exercising an abundance of caution in recusing herself from cases involving her father’s former employer. She would need to recuse herself, he said, if her father was ever a party to, or an acting lawyer on, a case before her — unlikely scenarios now that her father has retired. She would also need to recuse herself if a case required the court to evaluate or critique her father’s case work, which could mean he would have an interest in being exonerated, or having his work found appropriate, Professor Gillers said.

“Her father’s close identification with Shell and A.P.I. alone is simply not enough to require recusal from the industry,” he said.

To Carlos Curbelo, a former Republican member of Congress who supports action on climate change, the focus on Judge Barrett’s comments misses a broader point that the courts are not the proper venue for dealing with a problem as vast and complex as climate.

“Because Congress has been so dysfunctional for so many years, now we look to the courts,” Mr. Curbelo, “but we should be far more concerned with lawmakers and their understanding of the issue and willingness to act.”