Burglar broke into Beckham masnion 'after scrambling up scaffolding' 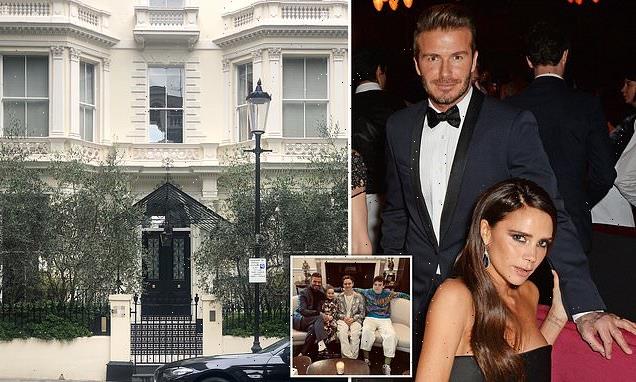 A masked burglar broke into David and Victoria Beckham’s £40 million mansion after scrambling up his next door neighbour’s scaffolding, it has been claimed.

Police have been trawling through CCTV footage from the property adjacent to the Beckham’s Holland Park home in West London, which has been empty while building works are going on.

They have also asked neighbours to hand over security camera videos in the hunt for the lone thief.

The raider was able to break into an upstairs bedroom while the former England captain, wife Victoria, 47, and daughter Harper, 10, were in the house before escaping with thousands of pounds of designer and electric goods.

A neighbour told MailOnline today: ‘It’s scary to think they were able to get in while the family were inside.

‘Police came round asking for security camera footage and mentioned the scaffolding at the house next door.

‘It goes the whole way up the building. There are about six platforms with ladders and there are poles that go across to the chimney at the Beckham’s house which is just a couple of feet away.’

The break-in, on February 28, was not discovered until 17-year-old Cruz returned home from a night out and stumbled upon the upturned bedroom and spotted broken glass from a window on the floor. 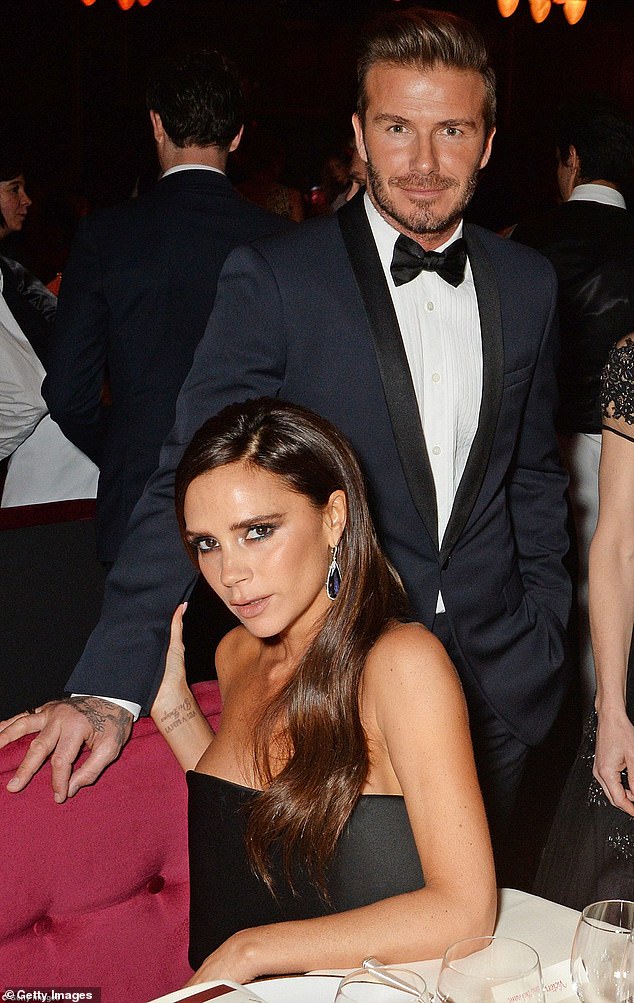 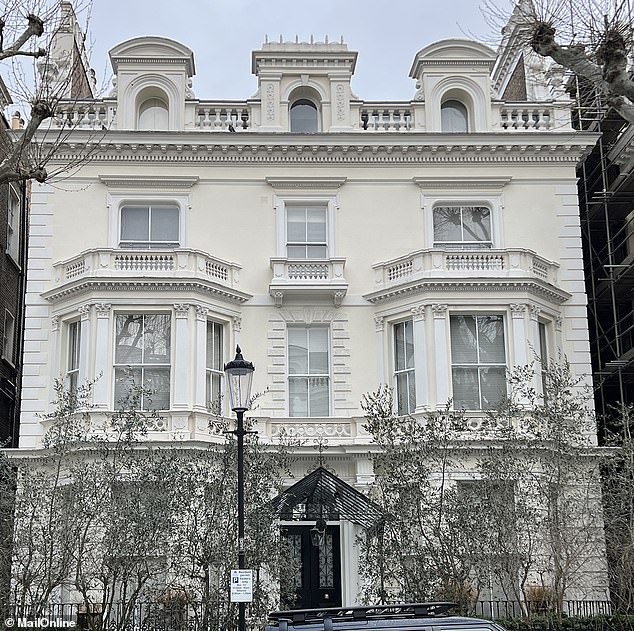 The Beckhams’ home in Kensington, pictured today, following a burglary at the property last month 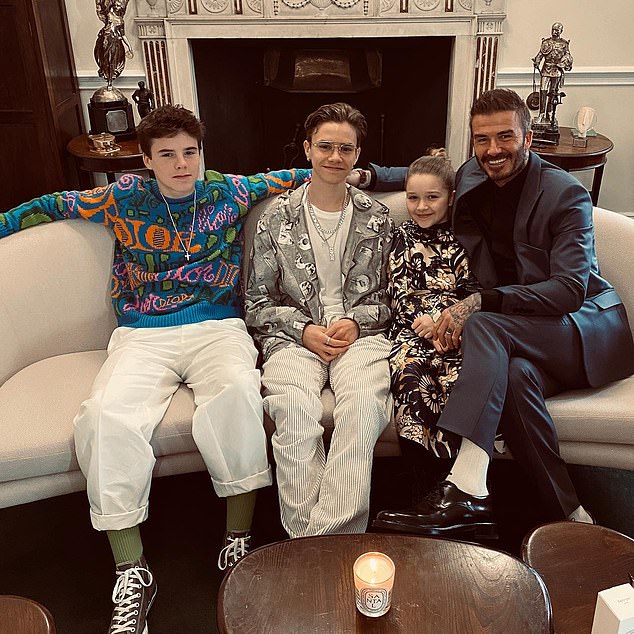 David, 46 (right), reportedly called 999 and set about searching the mansion for the burglar with Cruz (left), while Harper (centre right) remained with Victoria, 47, and waited for the police (Brooklyn centre left)

David, 46, reportedly called 999 and set about searching the mansion for the burglar with Cruz, while Harper remained with Victoria, 47, and waited for the police.

The burglar is thought to have been part of a gang which targeted at least two other houses in the area on the same night.

The Met confirmed it is investigating and that no arrests have been made.

Today workmen were painting the outside of the house next door to the Beckham’s home which has large signs warning the building is subject to 24 hour surveillance.

A workman at the site said: ‘The police came around. They wanted to see our cameras and we gave everything to them.’

A woman who answered the door at the Beckham’s home said: ‘I’m sorry you need to make an appointment.’

Cruz Beckham was the first member of the Beckham family to return to social media after their West London home was burgled.

The thief forced their way into a spare upstairs bedroom at the £40m mansion in Holland Park and ransacked the place while David, Victoria and 10-year-old daughter Harper relaxed downstairs completely unawares.

The break-in, on February 28, was not discovered until 17-year-old Cruz returned home from a night out and stumbled upon the upturned bedroom and spotted broken glass from a window on the floor.

Cruz took to his Instagram Stories hours after the news emerged and shared a playful TikTok video of himself relaxing in a grey hoodie.

This was followed quickly by his older brother Romeo who shared a snap of himself sporting a black printed T-shirt, grey tracksuit bottoms and a pair of sunglassses.

Neither David nor Victoria have broken their silence yet on the burglary.

A source close to the family told The Sun: ‘Sadly the Beckhams were the victims of some fairly professional thieves who have been operating in the area.

‘Fortunately the criminals only made it as far as one bedroom before they ran off.’

The family are said to have been ‘shaken up’ by the burglary, but no one was hurt.

The intruder reportedly climbed over the gate at the front of the house, shimmied his way up the property and then broke in through the spare bedroom window. Police are said to be reviewing CCTV footage.

The thief made off with thousands in designer clothes, accessories and electric goods stored in the room – but did not hang around for more.

Two other properties were also targeted, including a neighbouring house which thieves found was empty once inside, and another home on the same street into which burglars were unable to force entry.

A Met spokesman said: ‘Police were called at 00.37 hours on Tuesday, March 1 to reports of a burglary at a residential address in the W11 area of Kensington.

‘A number of items were reported stolen. No arrests have been made. Inquiries continue.’

The raid comes just weeks after Posh and Becks won planning permission to overhaul their Holland Park mansion, parts of which had been sealed off as it had began to crumble.

Pictures of the property exclusively obtained by MailOnline show that the Grade II-listed property is held up by supports before work gets underway.

The couple were granted permission by Royal Borough of Kensington and Chelsea to repair their historic rear terrace and stairs, which had become too dangerous to use.

The statement also says the family no longer use the terrace which has structural damage is due to age, water ingress, cracking and spalling due to frost. 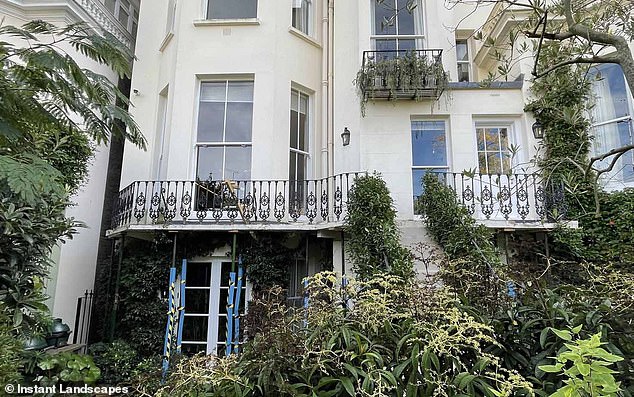 Work: David and Victoria Beckham have won planning permission to repair their ‘crumbling’ £31.5 million west London mansion (pictured) after parts of the property were sealed off 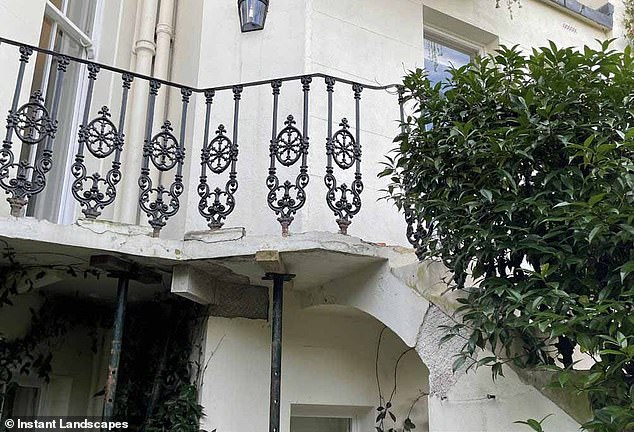 ‘Crumbling’: Pictures of the propertly exclusively obtained by MailOnline show that the Grade II-listed property terrace is held up by supports before work gets underway (pictured) 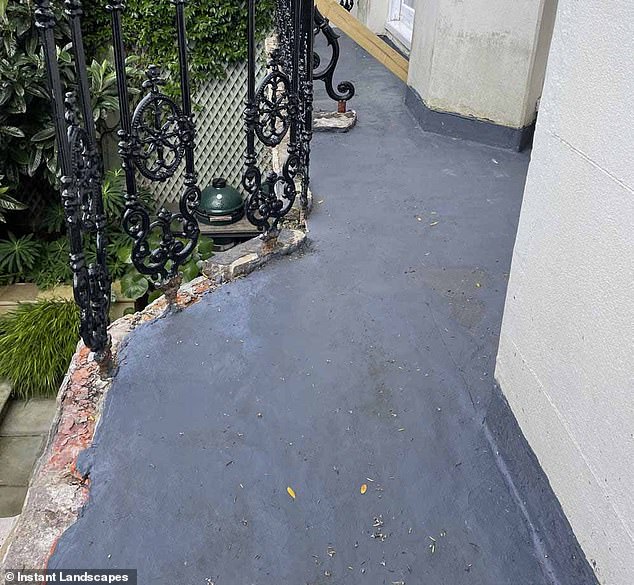 Out of use: The statement also says the family no longer use the terrace which has structural damage is due to age, water ingress, cracking and spalling due to frost

Props and timber bearers have been installed to provide temporary support to prevent collapse and any loss of the buildings original features – including damage to the original cast iron railings.

The statement reads: ‘A structural engineer has inspected the terrace and recommended repairs and renewal works on a like for like basis.’

From photos attached to the application, the roof terrace, which is crumbling in parts, is being supported by metal poles to stop it from collapsing.

The project is being overseen by Soho House architect Michael Ergatoudis, who was also in charge of the previous renovations at the home and their Cotswolds retreat.