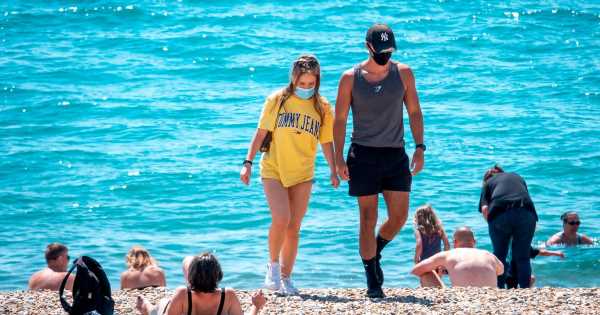 A period of warm weather is set to arrive just in time for Easter, say forecasters.

The mercury is expected to climb back up this week as a high pressure system moves its way towards the UK.

It raises hopes of a sunny Easter bank holiday next weekend, with conditions finally starting to feel more like spring after a recent spell of cold weather gripped the nation.

Data from independent forecaster WXCharts predicts that temperatures of 18C in the south of England could even match those of Greece by the end of the week.

Ian Simpson from Netweather meanwhile said the change is down to a new front coming up from the south and replacing "chilly north-westerly winds", resulting in "dry and settled" weather.

Describing the full picture for the upcoming bank holiday weather, he added : "It may not be sunny everywhere: western Scotland and Northern Ireland will be more prone to cloudier weather at times with occasional light rain, and eastern counties may see some low cloud come in off the North Sea, depending on where the high pressure area ends up.

"However, for most of the UK the holiday period looks likely to be dry with plenty of sunshine."

The Met Office also expects a mix with most of the heat being concentrated in the south, with their outlook for Thursday April 14 to Saturday April 23 reading: "Some rain may occasionally spread into parts in the southeast at first but it is likely to turn dry and become generally much more settled, though perhaps rather cloudy, in the south, with lighter winds through to the end of this period.

"Temperatures are expected to be above average, and warm at times for the south.".

The start of the week is however expected to be a wetter affair, according to both the Met Office and the BBC.