It looked as though warring ex-partners Constantine Arvanitis and Selina Holder were finally ready on Wednesday to lay down the legal guns in their bitter defamation battle, but the uneasy truce wouldn’t last.

Soon enough there would be more unpleasant questions: about selling Viagra to colleagues, about dating multiple women at the same time, and about text message exchanges demonstrating a stormy love-hate relationship. 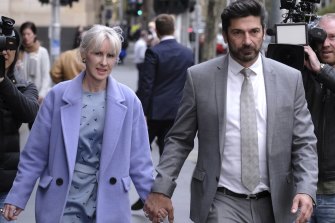 But after having already given several hours of evidence against Ms Holder to deny claims he was a violent sex addict, Mr Arvanitis was not in the witness box early on day three of the County Court trial.

He was still on oath, but the courtroom was closed as both parties discussed settling their legal fight away from the eyes of the public.

Ms Holder had already knocked back an offer to pay $5000 to settle on Monday, but perhaps she was ready to stop any further dirty laundry being aired.

Flanked by their lawyers, Mr Arvanitis and Ms Holder met in front of a mediating judge. They then retreated from the court to discuss the next moves in private, as pieces of paper were ferried between meeting rooms.

At noon, word came through: there would be no agreement.

“The matter is continuing, your honour,” Mr Arvanitis’ lawyer, Paul Hayes, QC, told the court after it was reopened. Judge Julie Clayton thanked the parties for attempting mediation and urged them to try again in the future.

Mr Arvanitis was then put back on the stand to continue giving evidence about the depths of his relationship breakdown with Ms Holder. The pair have a child together, who Mr Arvanitis says he has not seen since late 2016.

One of the documents Mr Arvanitis is suing over is a letter allegedly sent by Ms Holder and two other ex-girlfriends, who it is claimed teamed up as a “sisterhood” to say he was violent, a sex addict and a cheat.

Mr Arvanitis told the court how, after his break-up with Ms Holder in mid-2015, he had met two other women on Tinder in early 2016. One was a marketing executive from Sydney and the other a furniture company sales manager in Melbourne, he said.

At the same time he was dating those women, Mr Arvanitis said, he had another partner in Adelaide.

“How would you have described your status at the time?” Mr Hayes asked.

“Single and dating around,” Mr Arvanitis replied with a small smile.

Mr Arvanitis was also questioned about an investigation by ANZ, his former employer, in early 2016 into buying and selling Viagra during work hours and on bank premises.

He responded that he had bought a 10-pack of the erectile dysfunction drug.

“I took some with me to Sydney because a colleague wanted to try some as well,” he said. “I gave him a couple.”

Mr Arvanitis, who earns about $170,000 as an IT consultant for NAB, said he was not paid his bonus that year and continued to work for ANZ for another two years.

Mr Arvanitis is yet to be cross-examined by Ms Holder’s lawyer, Barrie Goldsmith. On Monday, in his opening remarks, Mr Goldsmith told the court that his client and Mr Arvanitis continued to have sex after their break-up in 2015.

When asked if he’d had “intimate relations” with Ms Holder in late 2016 in a “hotel and a baby change room and the like”, Mr Arvanitis said “no”.

At that response, Ms Holder loudly scoffed in the front row of the courtroom. She also laughed when Mr Arvanitis explained why he had sent messages to Ms Holder at that time telling her he loved her.

“I was willing to say anything I could to make sure I saw my daughter,” he said.

Mr Arvanitis outlined a tempestuous relationship with Ms Holder in 2016, which involved her transferring Virgin Velocity points from his account into hers.

Several abusive text messages from Ms Holder to Mr Arvanitis were read out in court.

“F— off, old sad ugly weirdo,” said one. “What has your life turned into, a circus? All I see is clowns,” said another.

“You are being followed 24/7, hope you both burn in a sad tragic plastic surgery hell fire,” the message said.

The allegedly defamatory letter Mr Arvanitis is suing over was received by Ms Thornton in January 2018. It was signed by Ms Holder and two other ex-girlfriends.

The court heard that the other women had denied sending the letter, but in a settlement with Mr Arvanitis had apologised to him and withdrawn the allegations.