Jealous boyfriend, 32, is jailed for two years and nine months after battering mother-of-five, 34, with a metal gym weight for TWO HOURS during a row about her Facebook friends

A controlling boyfriend has been jailed for nearly three years after battering a mother with a metal gym weight for two hours following a row about her Facebook friends.

Richard Wilson, 32, flew into a rage in May after noticing girlfriend Jenna Goddard, 34, had deleted four friends from her social media account.

Jealous Wilson, from Oldham, Greater Manchester, thought she had removed them because she was hiding something from him.

As the mother-of-five came out of the shower he punched her to the floor and pounded her leg repeatedly with the metal weight in her daughter’s bedroom. 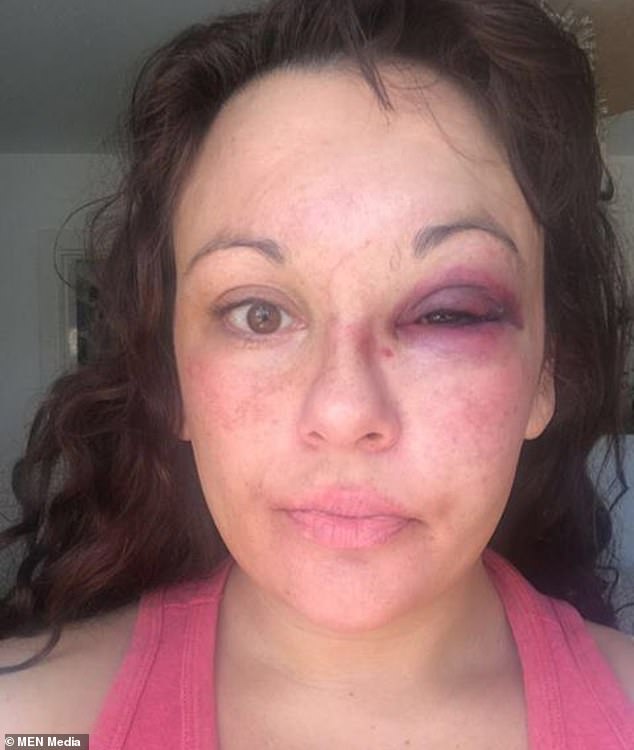 Jenna Goddard, 34, was savagely beaten by her controlling ex-boyfriend after a row about her Facebook friends 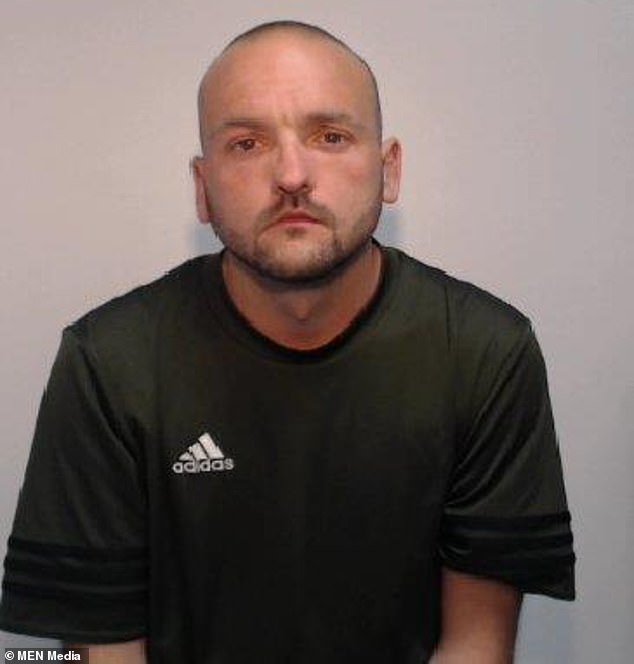 Richard Wilson, 32, flew into a rage after noticing Ms Goddard had deleted four friends from her social media account 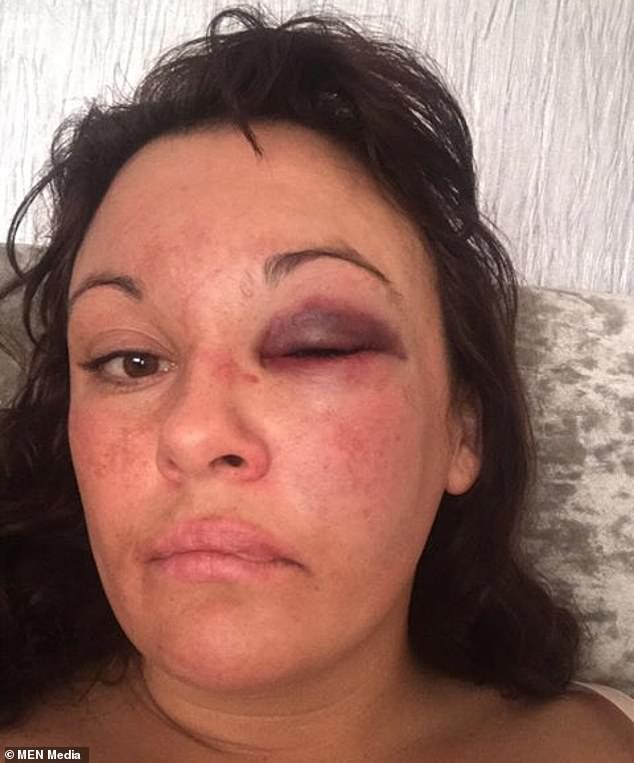 The ferocious two-hour assault in May ended when Ms Goddard, dressed in just her underwear, managed to run to a neighbour’s house and call the police.

It came three months after Wilson punched and stamped on her face in her front garden following a row about her WhatsApp profile picture.

He only stopped when her 15-year-old daughter and her friend intervened.

Hairdressing salon owner Ms Goddard said: ‘He was always having a go at me about social media. Eventually I came off it because it was just easier.

‘It got to the stage where I didn’t see anybody or go anywhere. But I’d have a word with him, he’d say sorry and he’d be much nicer for a few weeks, so I just plodded along with it.

‘I’d just got out of the shower, I was naked and he started having a go at me because I’d lost four Facebook friends.

‘He thought I’d deleted them because I didn’t want him to see who they were. He kept punching me in the face and hitting my leg with the weght.

‘He was beating me up for two hours, I was screaming. I thought I was going to die.’

Today Wilson was jailed for two years and nine months at Minshull Street Crown Court after pleading guilty at an earlier hearing to two counts of actual bodily harm.

On his release he must spend two years on licence and he was also given an indefinite restraining order barring him for from contacting Jenna.

The court heard he has twice been convicted of attacking previous partners, 11 years ago and has 19 previous offences, many for violence. 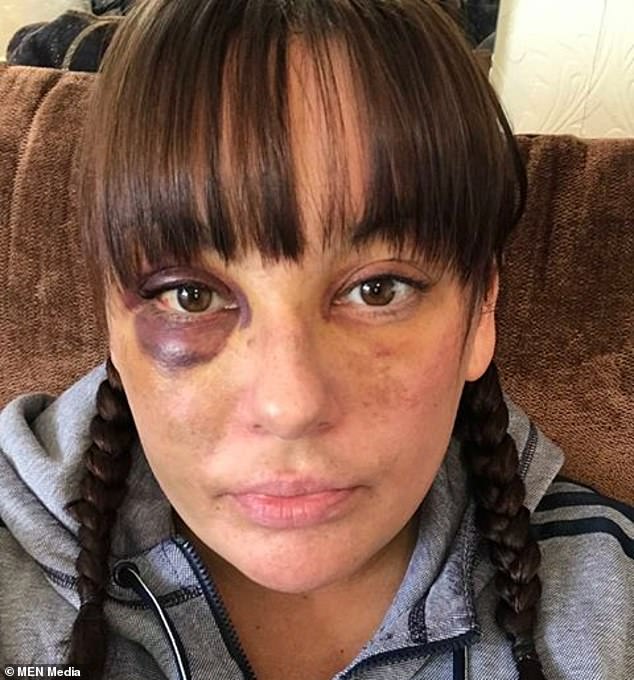 Unaware of his violent past, Ms Goddard struck up a relationship with Wilson last June.

But within a matter of weeks he began to display worrying signs of possessive and jealous behaviour.

Ms Goddard said she now feels ‘at ease’ following the sentencing. She said: ‘I’ve put him behind me now. I’m feeling positive, I’m looking to grow my business.

‘If I met him in person I’d still be petrified but I feel good knowing he’s away for that length of time.’

She urged any other women experiencing domestic violence to use Claire’s law – the ruling which allows women access to a partner’s criminal history – and report it to police at the first sign of trouble.

She said: ‘Don’t be stupid like I was. use Claire’s Law as soon as you can. Report it to the police.

‘I genuinely think he would have killed me. I just hope no woman is hurt by him ever again.’ 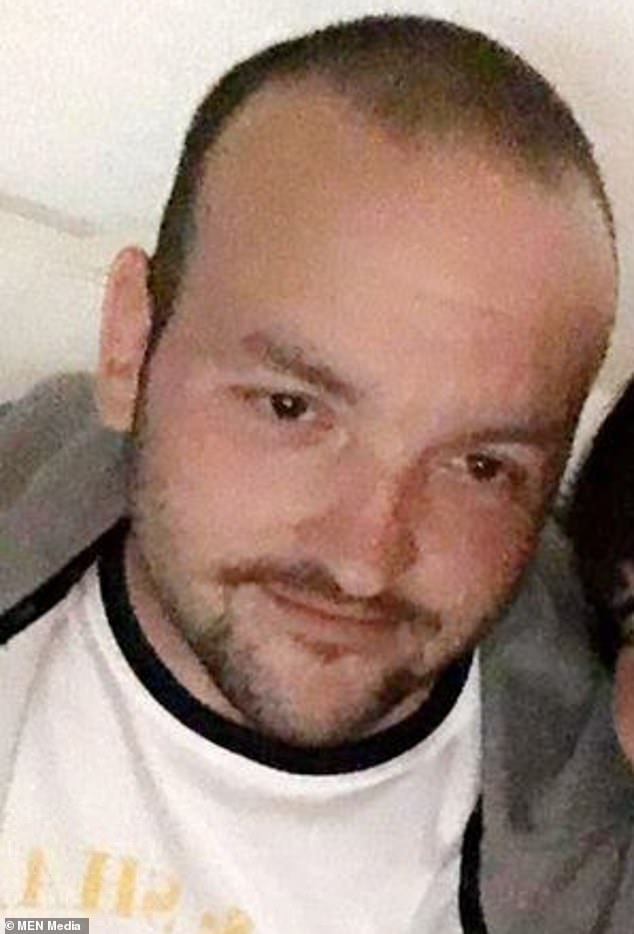 Habebb Yousaf, defending, told the court Wilson ‘knows what he did was clearly wrong’.

He said in the weeks before the assaults Wilson suffered ‘serious injuries’ when he attacked by a group of men with a hammer.

Mr Yousaf added: ‘He was extremely paranoid, he was scared of going out for fear of being attacked again.

‘He does not seek to justify his actions, but this may go some way to explaining why he did what he did.’

She added: ‘It seems to me you have a significant problem with anger management.

‘This is the third time you have committed assaults against partners. There is a pattern of offending against previous partners.’