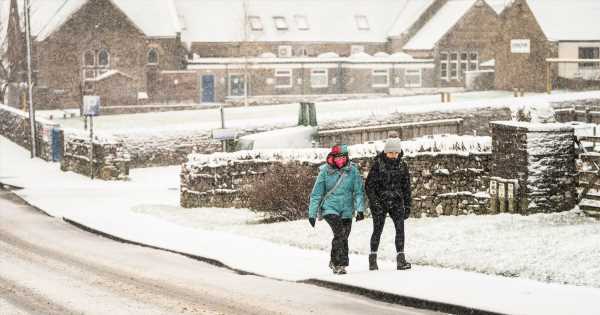 Britain is facing another week of icy temperatures as a 'near freezing' weather front looks set to bring chills across the nation.

Up to 3cm of snow could fall today in some areas, as cold air from blows in from Greenland in the Arctic circle.

Maps from WXCharts seen by BristolLive show the same system from the far north of the globe — which brought huge snowfall to some parts of the nation at the start of January — will return to hit the UK.

Elsewhere there will be something of a north-south divide to the weather on Tuesday, according to forecasters.

Alyssa Smithmyer, a meteorologist from AccuWeather, told Express.co.uk: “Through Tuesday morning, the chances for snow will be limited to portions of northwest and central Scotland across the higher elevations. Snowfall amounts will likely be limited to under 1 inch (3 cm) across these regions.

“A front crossing over the United Kingdom will bring rainy spells, pushing from north to south, throughout the period from midday Monday through Tuesday afternoon.

“The best chance for snowfall will be overnight Monday when temperatures can drop near-freezing level in the hills of Scotland.

Today's forecast from national forecaster the Met Office meanwhile says: "Blustery showers in west and north Scotland, slowly easing. Rain, drizzle and low cloud across southern areas, where it will be mild."

"However sunnier skies in central parts of the UK should follow to all but some southern counties later."

Three flood alerts remain in place in the UK after recent heavy rainfall: at the Severn Vyrnwy confluence on the Welsh border, South East Somerset Rivers, and West Somerset Streams.

This means that flooding is 'possible', and residents of the affected areas should 'be prepared' to take action if informed to do so by local authorities or the Environment Agency.