They would never have got together had it not been for a chance observation while browsing a newspaper, a sleazy soothsayer and a coincidence that would stretch the credulity of the most gullible reader.

In the Sixties, Maurice Woodruff — a clairvoyant and astrologer — was being paid by film companies to steer the notoriously superstitious Peter Sellers in the direction of their projects. After gazing at the tea-leaves and into crystal balls, Woodruff told Sellers someone with the initials ‘B.E.’ would become very prominent in his life.

He meant the film director Blake Edwards, hoping Sellers would register the link and accept the role of Inspector Clouseau in A Shot In The Dark, Edwards’ second Pink Panther film. 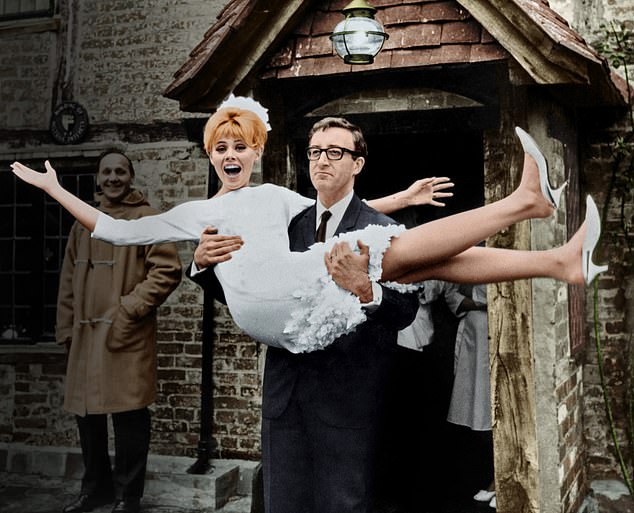 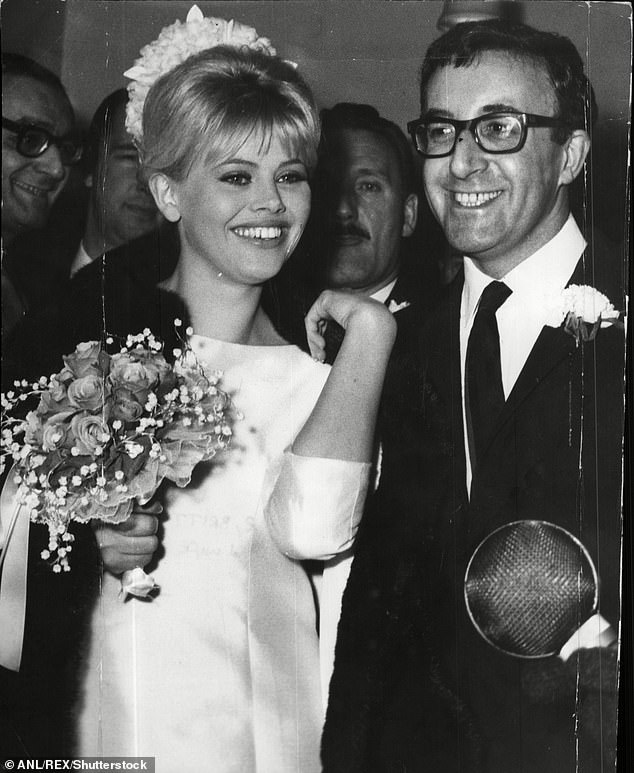 Peter Sellers and actress Britt Ekland on their wedding day 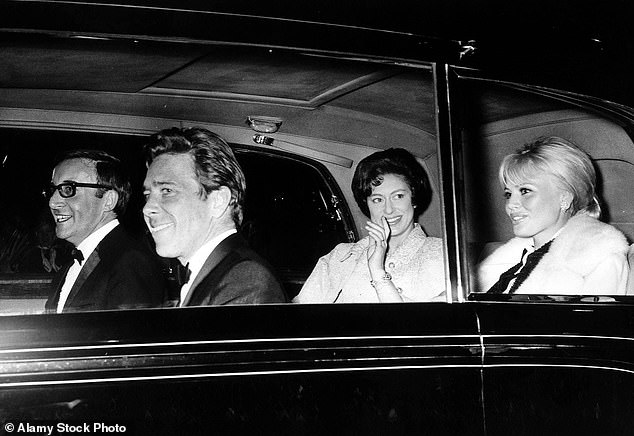 Princess Margaret in a car along with Tony Armstrong Jones, Peter Sellers and Britt Ekland in April 1965

Unfortunately, Sellers saw a photograph of a beautiful Swedish blonde called Britt Ekland in a newspaper and, after registering that her name had the astrologically significant initials, sent his henchman, Bert Mortimer, to her hotel room at the Dorchester to fix up a date. The Bardot-like beauty was in London to co-star in a Richard Attenborough film called Guns At Batasi and when Sellers clapped eyes on the 21-year-old Britt for the first time in February 1964, he was not disappointed.

‘I was knocked over, absolutely stunned,’ he said of a girl 16 years his junior. ‘I couldn’t believe it. She was so great. She wore a simple dress and her hair was like sunlight. Unbelievable.’ The smitten Sellers bombarded her with flowers and expensive little gifts and — just ten days later — they were walking down the aisle.

But things went downhill pretty swiftly. After four years of marriage, Ekland divorced the man she dubbed ‘a monster’ and this week it emerged that more than 50 years later she still bore him a grudge. 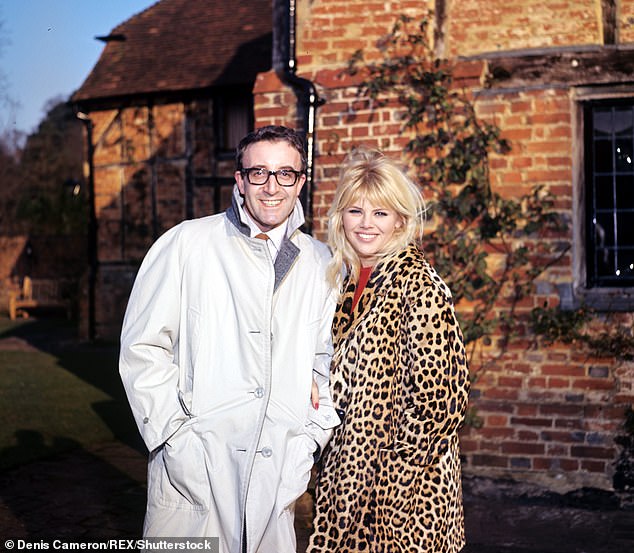 Peter Sellers and Britt Ekland pictured in 1965. After four years of marriage, Ekland divorced the man she dubbed ‘a monster’ and this week it emerged that more than 50 years later she still bore him a grudge

When Will Sellers, the comic icon’s grandson by the son of his first wife Anne, approached her to appear in a BBC documentary to mark the 40th anniversary of his death this summer, she refused point blank.

The truth is that the Britt who accepted Sellers’s proposal of marriage was like a lamb to the slaughter and the ensuing relationship left her with deep emotional scars.

In a bid to explain her impetuous decision some time later, she said: ‘I was very young and he swept me off my feet.’ She knew nobody in London and here was this famous comic actor making a fuss, squiring her about town.

Looking back, it’s easy to see her naivete was being exploited. The wedding was like a scene from a movie. Sellers arranged for a professional 16mm film to be made, complete with a commentary by his friend, the actor David Lodge.

Lodge was joint Best Man with Sellers’s long-time sidekick, the sycophantic actor Graham Stark, of whom John Le Mesurier had said: ‘Graham Stark is the only man in London with a flat up Peter Sellers’ bottom.’ The stills photographer was celebrity snapper Terry O’Neill.

For the reception at Elstead, Sellers’ Surrey mansion, stuntmen from Shepperton Studios kept the Press away from the gates. The only caustic note was sounded by Sellers’s grim old Jewish mother, Peg, who took one look at Britt’s Aryan perfection and referred to her as ‘that bleedin’ Nazi’.

Though they were regularly pictured in the papers, the relationship deteriorated immediately. ‘I had never lived with a man,’ said Britt. ‘I came straight from my parents.’

Having no idea what was expected of her, she attempted to follow the geisha rules laid down by romantic novelist Barbara Cartland. ‘When he comes in at night,’ Britt said of her husband, ‘I have changed, combed my hair. I’d never let him see me wandering around in curlers or a dressing gown.’ 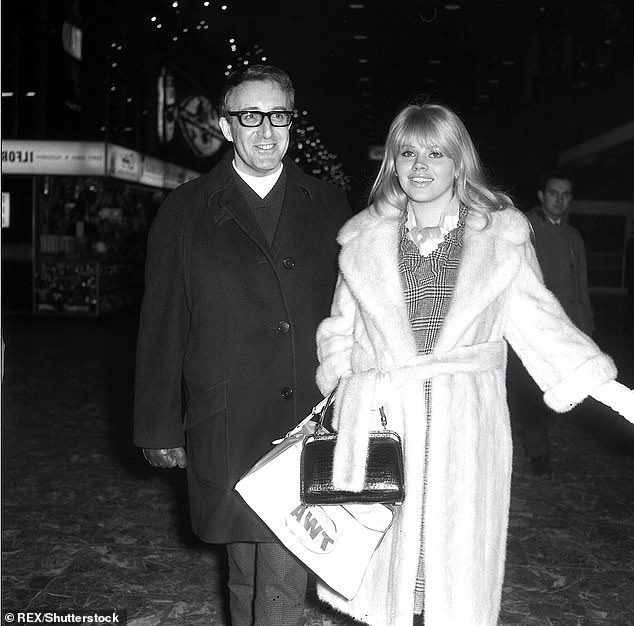 Peter Sellers and Britt Ekland arrive at an airport before flying to Paris in December 1964. The truth is that the Britt who accepted Sellers’s proposal of marriage was like a lamb to the slaughter and the ensuing relationship left her with deep emotional scars

The compliant, cosy, deferential scene was undermined somewhat by Sellers’s feelings of morbid jealousy — and by the couple’s instant separation.

For only two days after the wedding, Sellers was expected in Hollywood to begin making Kiss Me, Stupid, with director Billy Wilder. Britt was meant to work on Guns At Batasi, about a fictional military coup in East Africa, being shot at Pinewood.

From LA, Sellers wrote a rather despairing, revealing letter: ‘I have a dreadful fear at the back of my mind that you might leave me . . . I love you desperately and think you are so absolutely wonderful in every way that I find it very difficult to understand why you married me.’

As Sellers didn’t fully believe in himself, he didn’t trust anyone’s affections towards him either — a very dangerous combination of insecurity and narcissism, resulting in control freakery.

Graham Stark and David Lodge had small parts in Guns At Batasi, and Sellers told them to keep his new bride under surveillance. He feared she’d allow herself to be seduced by fellow cast member John Leyton, who’d had a No 1 hit in 1961 with Johnny Remember Me.

Sellers phoned Britt long- distance from Hollywood: ‘Why don’t you take the day off and come over?’ He assured her he’d clear all this with her producers, he was well connected — and he’d worked twice with Batasi’s director, John Guillermin, on the feature films Never Let Go and Waltz Of The Toreadors.

This was bluster. Sellers said nothing to any producer, and Britt later felt she’d been more or less abducted: ‘He made sure I didn’t go back.’ Her role was re-shot with Mia Farrow. The litigation lasted years, Sellers countersuing 20th Century Fox for ‘mental distress and injury to his health’. 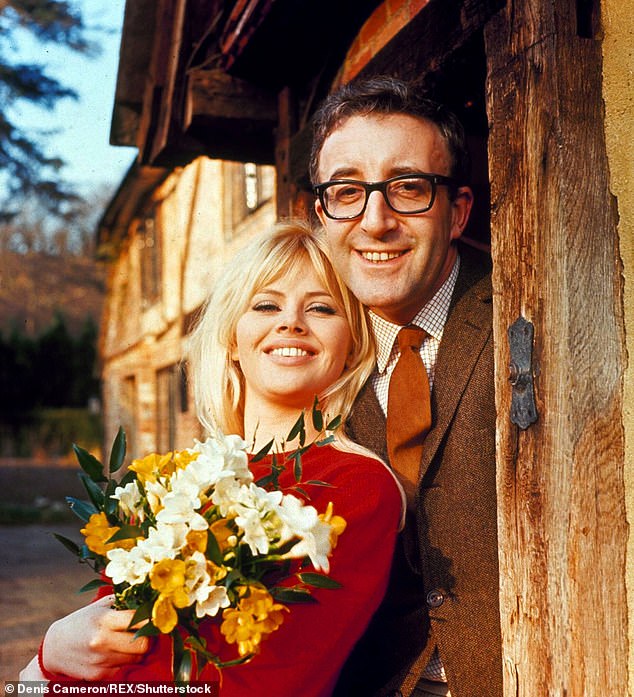 The couple pictured together in 1965. The compliant, cosy, deferential scene was undermined somewhat by Sellers’s feelings of morbid jealousy — and by the couple’s instant separation

Meanwhile, to make himself extra-virile in bed, Sellers, aged not quite 40, was taking ampoules of amyl nitrate, or poppers, which disrupted his metabolism — and on April 7, 1964, he suffered a series of heart attacks.

Billy Wilder, who had not hit it off with his star, commented: ‘Heart attack? Heart attack? You’ve got to have a heart before you can have an attack!’ Sellers was replaced by American actor Ray Walston, the footage all re-done, and Kiss Me, Stupid was a huge flop.

Back at Elstead, it was Britt’s job to see Sellers through his convalescence, and to administer his complex cardiological medication.

He was an ungrateful invalid. When he found out Britt was pregnant, Sellers said: ‘I’ve got Michael, I’ve got Sarah. I don’t want any more children.’ Director Bryan Forbes and Nanette Newman, his actress wife, had to talk him out of insisting Britt had an abortion.

When she went into labour with Victoria in January 1965, he dumped her on the pavement outside the Welbeck Street Clinic and whizzed off to make What’s New Pussycat. When Britt eventually visited him on the set, she blotted her copybook by mistaking Sellers for Woody Allen — there was a physical similarity, which Sellers found irksome.

When he was again mistaken for Woody, by a Hollywood mogul during the making of Casino Royale in 1967, he was next heard from in Sweden. Sellers had gone into hiding with Britt’s parents and refused to return to the film.

Sellers was incredibly mischievous in his off-screen life, too.

At Elstead, where Britt was sometimes so bored that she’d spend an evening gazing at her reflection in the polished marble of the fireplace, the pair would dine on frozen cottage pie and fish fingers, served by a butler.

When Goons fan Prince Charles came to lunch, Sellers hadn’t made provision for his bodyguards, and told the cook to divide His Royal Highness’s portion among his entourage — Charles was surprised to receive an eyeful of food. ‘Sheer insanity,’ said Spike Milligan.

Sellers and Britt made home movies with Lord Snowdon and Princess Margaret — and Sellers asked Snowdon if he’d like to swap wives. Sellers had to settle for a new camera lens instead, and Snowdon got a speedboat in return.

Sellers also asked Bryan Forbes if Nanette could be exchanged for Britt, but Forbes managed to laugh off the suggestion.

That such a crazy scheme could be broached indicates all was not well. ‘Being with Peter was like riding on a rollercoaster,’ remembered Britt. ‘One minute you were flying high, the next you were running low.’

Nothing came lower than his doomed efforts to turn her into his one big impossible love, Italian film star Sophia Loren.

In 1967, Sellers and Britt went to Rome to make The Bobo, in which he was a singing matador and she was to be a seductress. He insisted she wear a black wig, like Loren’s. This was ridiculous but he couldn’t see it.

‘You’re a lousy bloody actress,’ he told her. ‘Why don’t you listen to what I tell you?’ Not exactly morale-boosting comments — which began to be backed up with violence.

He stamped on Britt’s wedding ring so often that Garrard, the Queen’s jewellers, got used to having to fix it. He threatened her with a shotgun, ripped up her clothes, smashed her cassette player and carefully took apart her Cartier watch, flushing the cogs down the lavatory.

He also chucked her out of hotels — and when her parents came from Stockholm to rescue her after a flare-up on the island of Ischia, he didn’t like to hear them babbling in Swedish, as he felt excluded.

Sellers threw her luggage off his yacht, and Bert Mortimer was for ever having to gather up her personal effects. ‘Our marriage is finished!’ Sellers would cry.

Britt fought back, once bashing him over the head with a picture frame. ‘You hit me with me mum,’ he said, when he saw the cherished photo of Peg on the floor.

They were divorced in 1968, Britt citing Sellers’s psychological cruelty. He carried on getting married and divorced, treating women like cars or cameras, accessories he could replace without compunction when he was fed up.

For all his craziness, however, there has not been a comic actor to touch him.

From the The Goon Show to Ealing classics, Boulting Brothers films, work with Stanley Kubrick, Inspector Clouseau, all the way to Being There, Sellers remains a comic genius and it doesn’t much matter any more that he was a mean-spirited egomaniac.

As for Britt, she became a Bond girl, and starred in Get Carter and The Wicker Man. In Scandal, she is to be glimpsed on a sofa, with tassels on her nipples.

She had a long relationship with Rod Stewart and a shorter one with Warren Beatty. In 1996, she auctioned off her memorabilia at Christie’s — including the wedding dress from her marriage to Sellers and the come-hither Polaroids he took on the night they met.

‘I wanted to get rid of it all,’ she said. ‘I’m so tired of that sexy, cute little sex kitten, the youthful Britt.’ I can sympathise with that.

ROGER LEWIS’S book The Life And Death Of Peter Sellers was made into a Golden Globe and Emmy award-winning film by HBO, where Sellers is played by Geoffrey Rush and Britt Ekland by Charlize Theron.