BBC Weather forecaster Stav Danaos warned winds will continue to batter the UK throughout the weekend and heavy and prolonged showers will hit western areas first and move onto central areas later on. The wet weather conditions will be caused by a couple of fronts arriving from the north-west and will continue throughout Monday. Mr Danaos said: “It’s cool this weekend, certainly for the time of year.

“That’s because of where our air is coming from. From the north west on a brisk breeze.

“That’s going to feed in some showers into northern and western parts of the UK.

“But there will be some sunshine around too. Winds maybe not quite as strong as what we’ve had over the last few days.

“Low pressure to the north-east of the UK, high pressure to the south-west, that’s why we’re seeing this run of north-westerly winds which will feed in showers across northern and western areas.

“We could see some longer spells of rain and more cloud pushing into Northern Ireland, south-west Scotland and north-west England and north Wales.” 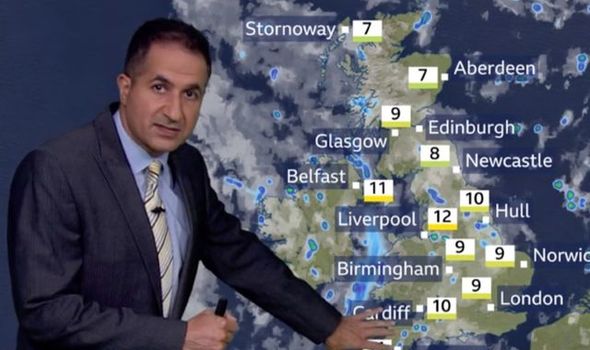 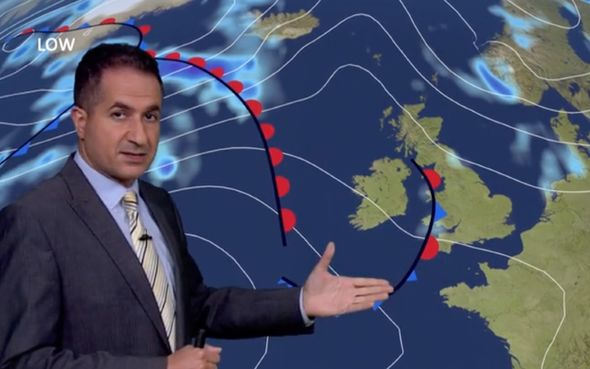 Overnight on Saturday, a new weather front will hit central parts of the country with more thundery rain and temperatures will drop to single figures, with lows of 7C, making it a rather cool night.

Grey skies, rain and strong winds have dominated September so far, with temperatures a far cry from the August heatwave.

The current cold and rainy weather is due to a cold front lingering across the UK, bringing patchy rain and dipping temperatures. However, next week could see conditions revert back to sunny skies and warm weather.

While the week will start off “rather cool” the Met Office forecast it will turn warmer as the week goes on.

According to the Met Office, next week will see tropical maritime air “drawn across the UK”.

A spokesperson said: “It is likely to turn warm in the south-east of England where temperatures will rise into the low 20Cs, perhaps mid-20Cs in one or two spots.

“At present, this is not expected to fit the criteria for a heatwave, however, as this requires temperatures of 27C or higher in the south-east for at least three consecutive days.”

Warmer Atlantic air will track across the UK from the west with England and Wales forecast to see the mercury soar as high as 24C next week.

However, the Met Office said: “This warm weather will be associated with cloud and rain for some of us, as the jet stream remains over the UK.”

According to Met Office weather maps, sunny skies will be seen widely across the East of England, up into Scotland and across the North West on Wednesday. 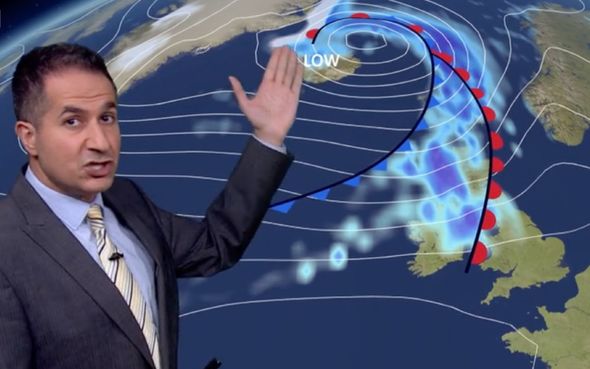 Maps have turned red with the heat anomalies, with up to 24C possible in the south of England.

The Met Office long-range forecast for Monday, September 7, through to Wednesday, September 16, predicts cloudy and dry conditions, but with the potential for heavy rain.

Despite this wet start to the period, more settled conditions are forecast from the West, with sunny spells.

While there will be scattered showers and strong winds, temperatures will be near normal “perhaps just above normal for a time when the rain moves in midweek.”

If the UK has several days of consistently warm weather above-average temperatures, this would be known as an Indian Summer.

This is a term used to describe a period of unseasonably warm weather, typically in September, October and November.