Bad signs for Macron as candidate for Paris mayor trails

Paris: France's first-round municipal elections gave President Emmanuel Macron's party a taste of the challenge it faces among urban voters as his candidate for mayor of Paris trailed in exit polls.

A record low number of voters braved the nation's virtual lockdown to choose mayors for more than 35,000 municipalities in Europe's biggest public ballot since it became the focus of the coronavirus pandemic. 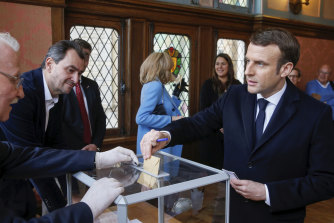 French President Emmanuel Macron casts his ballot in the mayoral elections on Sunday.Credit:AP

In the days leading up to the election, Macron shut down schools, and his Prime Minister ordered a shutdown of non-essential businesses, including the capital's normally bustling cafes and restaurants. Macron considered scrapping the election, then relented after consulting opposition parties, which stood to make gains on Sunday.

Polls suggest Macron's popularity is dwindling, and opposition to his overhaul of the pension system has remained strong even as protests have died down. Macron's three-year-old party only ran candidates in half of the large cities up for grabs. The French government is still weighing whether the second round can go ahead as planned on March 22.

In a highly sanitised election – with antibacterial gel, safety perimeters between queuing voters and express lines for the elderly people – Parisians gave little solace to Macron. Socialist Mayor Anne Hidalgo was leading with a projected 30 per cent of the vote, ahead of Rachida Dati of Les Republicains and Macron's candidate Agnes Buzyn at 18 per cent, according to exit polls.

Macron's party, La Republique En Marche, picked Buzyn only a month before the vote after his previous candidate for Paris mayor withdrew over a sex video. The race was complicated by a former member of Macron's party, mathematician Cedric Villani, who refused to drop out and was running fifth behind Green candidate David Belliard.

Amid the coronavirus outbreak, turnout fell to an estimated 44 per cent, on track for the lowest participation since the founding of the Fifth Republic in 1958.

In a sign of the extraordinary circumstances, the French confronted the fact that they were allowed to vote, but not to shop. On Sunday, many Parisians walked around in parks or gathered for drinks by the Seine.

Macron took more than a third of the votes in Paris the first round of the 2017 presidential election and in last year's European elections.

More than 5,400 people have been infected by the coronavirus in France and 127 have died. A worst-case scenario predicts 300,000 to 500,000 deaths in France, based on highest estimates for mortality and transmission rates, Le Monde reported.