A high-ranking Victorian police officer facing a mandatory prison sentence over allegations he assaulted an emergency services worker has had charges against him withdrawn after they were deemed to be “not in the public interest”.

The decision to drop the case against Detective Inspector Darren Cooper has angered many in the force, who question whether the outcome would have been different for a lower-ranked officer or a member of the public. 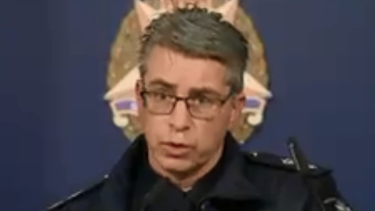 Charges against Detective Inspector Darren Cooper have been dropped.Credit:Seven News

It also appears to be at odds with a campaign by The Police Association, for tougher and more consistent penalties for those who attack emergency services workers while on duty.

Detective Inspector Cooper was the subject of an internal investigation by Professional Standards Command after the alleged altercation with fellow police officers in Wantirna on July 28, 2019.

The officers from Rowville station were called when Detective Inspector Cooper was allegedly acting erratically on Burwood Highway, after he had attended a social event at a local sporting club.

Detective Inspector Cooper was placed in the back of a police divisional van, before allegedly kicking the back doors and calling triple zero for assistance from inside the vehicle.

He was charged last year with assaulting an emergency services worker, using profane language, and being drunk in a public place by detectives from professional standards command.

However, all three charges were withdrawn on April 30 in the Ringwood Magistrates Court.

A Victoria Police spokeswoman told The Age the decision to drop the case had been made by the Office of Public Prosecutions after “determining proceedings were not in the public interest”.

A spokeswoman for the Office of Public Prosecutions said its decision to withdraw the charges was made after “careful consideration of the evidence, facts and circumstances”.

Last year, then Victorian Attorney-General Jill Hennessy announced tougher laws to make it harder for people who assault emergency services workers to avoid jail by claiming they were impaired by alcohol or drugs.

The measures aimed to narrow the range of excuses offenders could use in court to avoid a mandatory six-month prison sentence.

“We are making the test much harder for people to demonstrate that they were suffering from the impacts of a mental impairment,” Ms Hennessy said at the time.

Under the changes, cases of assaults on emergency workers are to be heard in the County Court, rather than the Magistrates Court, which deals with lower-level crimes.

The new laws had followed the high-profile case of James Haberfield, 22, who avoided a six-month sentence for assaulting a paramedic, after arguing he consumed a “cocktail of drugs” at a music festival. Haberfield also had depression and autism spectrum disorder.

“Police and those in emergency services generally — who serve and protect the broader community — need to be respected. People need to be responsible and accountable for their actions”.

“Our members want to see the courts impose sentences that more closely resemble the maximum terms available in legislation for these crimes,” Mr Gatt said in 2019.