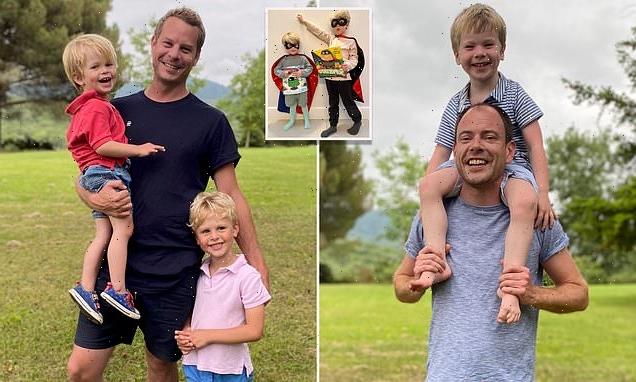 New dads worry they are ‘coming up short’ raising their kids, say brothers-in-law who launched a fathers support group when lack of sleep and never-ending mess left them feeling helpless

Dads often feel they are ‘falling short of the mark’ when starting a family, say brothers-in-law who used their own ‘helpless’ experiences of fatherhood to set up parenting startup

Many fathers feel worried that they are not good enough when raising their children, according to a pair of dads who used their own experiences to set up a fatherhood support business – Hank.

Brothers-in-law Gregg Stone, 40, and Henry King, 38, felt ‘helpless’ when they started a family. They set up Hank last October – a platform for fathers to meet and share their struggles but more importantly, get advice on how to be as hands-on as possible. 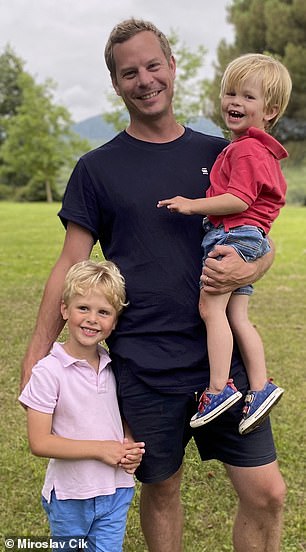 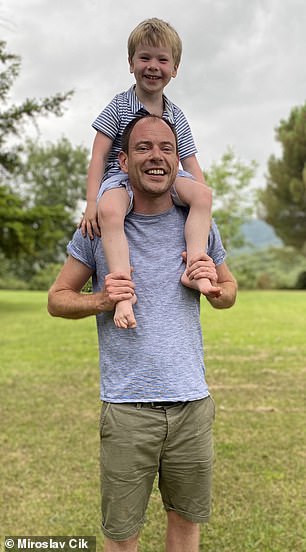 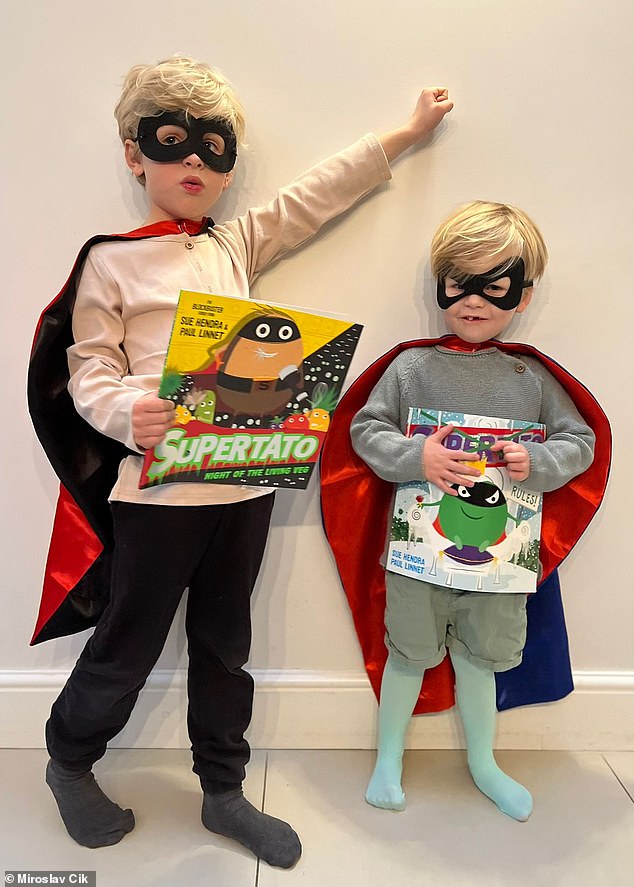 When Henry had his sons, Leo and Sam (above), he felt as though he was learning on the job

Like many new dads, Gregg and Henry found themselves muddling through when they had children. They were faced with everyday challenges, lack of sleep, never-ending mess – and ‘nothing to rely on except their instincts’.

Make time for yourself

Family time is essential but time for yourself is equally important. We all need to recharge and you need to plan it into the week.

Look after your physical health

Your mental health (and quality of sleep) will thank you. It really does have a positive knock-on effect on all areas.

Raising a family puts pressure on every area of your life. Sleep deprivation, money worries and the constant noise and mess are very real. Talking helps hugely with the very necessary parental decompress!

Be present, particularly in the early years

The old adage ‘the days are long but the years are short’ is so true. Stop soothe scrolling and savour the good times. They are what you will look back on in the nursing home.

Don’t feel you have to do all parenting together, particularly in the first few months. Get some sleep and tag team!

Research and plan for the future

It helps to be more organised and can take away some of the stress, particularly when those big decisions come around.

Don’t read too many parenting books

You won’t remember all the ‘tips’ and many will contradict each other. There is no perfect way to do this.

Don’t be too British – if you need a hand or someone offers, accept. Assemble your own village!

Hank is eager to expand too on a national level and build their ‘community’. Henry said: ‘Our main objective is for it to become the go-to resource for dad to kind of get their information.

‘We’re dealing with quite a time-poor set of people who are juggling family life with work life so we want to develop more resources that they can access in their own time.’

They felt that one of the biggest struggles of becoming a dad was the strain it can put on a couples relationship, particularly early on.

Henry, from Shepherd’s Bush, is also a school business manager at the Young England Kindergarten in Pimlico. He said: ‘There is a general sense of wanting to be a good dad, supporting the family in every possible way and being proactively involved in their children’s lives, which can sometimes lead to dads feeling worried about falling short of this mark.’

The classes, which are either free or have a small fee, have taken place all across London including Hammersmith, Islington and Battersea but people can also tune in online. They have even included post-session craft beer tasting in true dad fashion.

Henry, who has two children – six-year-old Leo and three-year-old Sam, said: ‘Gregg and I regularly felt helpless during the early years of starting families.

‘We decided to launch Hank because through our own experiences we realised there was not really much out there in terms of a support system for dads-to-be.’

Both he and Gregg became ‘fearful’ that they would not provide enough support that they wanted to.

When the pair were thinking about having children, they attended NCT classes but realised after that point, there was much more available help for mums rather than dads.

Gregg, from Battersea, owns an architectural visualisation company – Arko. He said: ‘As with life in general, you don’t know what you don’t know. It is not all about tiredness and dirty nappies as some would lead you to believe. It is first smiles, riding a bike and laughing together.

‘There seems to have been a cultural shift in the last few years with people much more willing to ‘try’ and seeking to improve.’

Henry and Gregg addressed readers in a letter on their website. They said: ‘When the children were born, it felt like we were muddling through – learning on the job, so to speak – with nothing but our instincts and wits to rely on.

‘Every new day would bring yet another new challenge to feel stressed about.’

Hank is challenging stereotypes as they recognised the growing role of a father today and have seen how the positive contributions are appreciated by the whole family. It’s about helping dads not just in the early years but the short, medium and long term.

Henry said: ‘Nowadays, there’s very much a sharing of parental duties and the sessions have helped fathers and fathers-to-be identify the challenges that are coming their way and provided them with information and skills to successfully navigate round them.’ 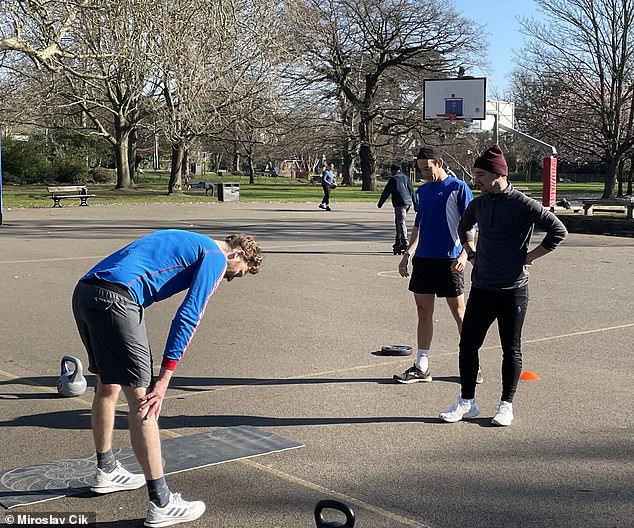 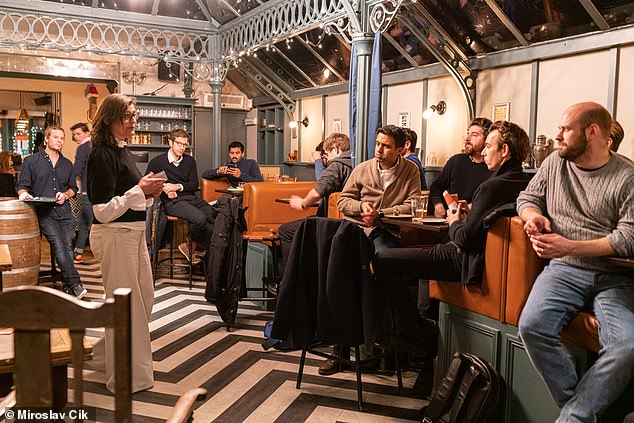 Life lessons: ‘How to plan your child’s education’ was held in Gregg’s local pub in Battersea

The classes are about meeting like-minded dads and dads-to-be who are in need of a break or looking for some expert advice.

Running the sessions through experts was essential to their new business. They wanted information to come from trusted sources, rather than themselves.

The classes usually attract around 20-30 dads – clearly there is a demand! Henry said: ‘They’re very casual, informal, and relaxed. You can be as sociable or as unsociable as you like. There’s no pressure on anyone.’

Dads will listen to an award-winning mental health speaker at the next Hank session on April 6th.