Anti-social behaviour soars by 67% in Devon and Cornwall

Police have seen a two thirds increase in anti social behaviour this summer as hordes of staycation holidaymakers descend on the region.

Devon and Cornwall police said the 67% increase in trouble is ‘unacceptably high’.

Assistant Chief Constable Jin Colwell said last weekend also saw record 999 calls and public order incidents in the holiday hotspots which have been overwhelmed by tourists. The chief officer said many of the incidents were ‘drink related’.

He added: ‘August so far has also seen public order crimes up by almost 25% on this time last year.

‘Again, we want people to be able to enjoy the good weather and reopened hospitality sector, but that has to be done responsibly – everyone must accept that personal responsibility and play their part.’ 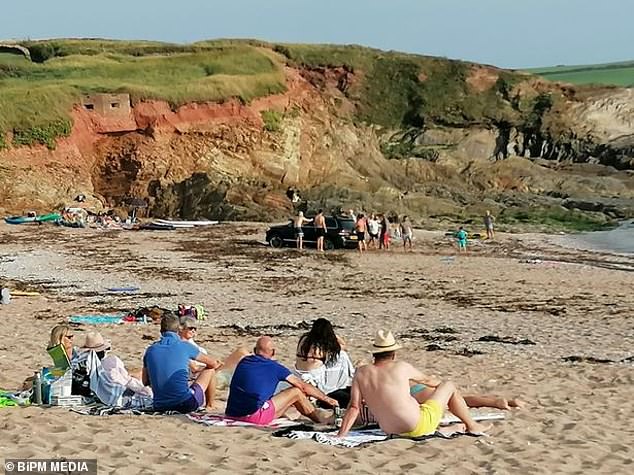 With heatwave set to continue this weekend and the August Bank Holiday looming, the police chief urged holidaymakers to think before they head to the region.

He said: ‘Book your accommodation before you travel, drive safely on our roads, respect our coasts and drink responsibly.

‘If you are visiting the many outstanding areas of natural beauty we have, take your rubbish away and play your part in making Devon and Cornwall a safe place for our residents and tourists alike.’

It comes as  as tempers became frayed after a 4×4 became stuck in the sand at a Devon beach.

The incident unfolded on Leas Foot Beach near Thurlestone in the South Hams on Sunday evening when a group apparently attempted to retrieve their jet ski which had broken down.

Edward Griffiths, who witnessed the whole episode, said they then drove their black VW Touareg down onto the beach which then became stuck. 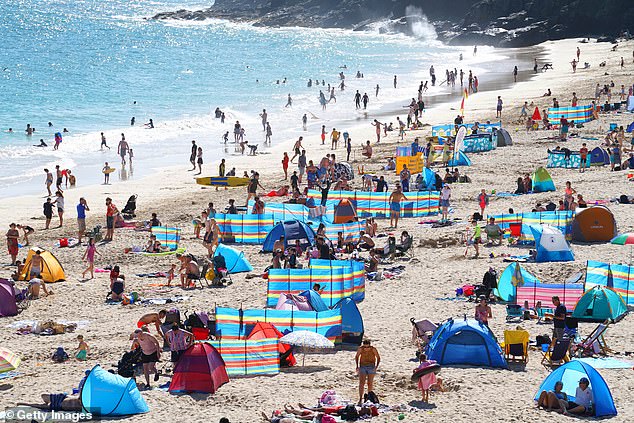 Groups of people relax on the beach in the sun this week in St Ives, Cornwall

This generated amusement to many on the beach at the time, causing tempers to flare.

‘I arrived at Leas Foot Beach, Thurlestone, at 6.30pm,’ explained Edward. ‘By the time i got there a family had already driven their VW Touareg across the golf club’s private land, and down the pedestrian beach access to get down to the water.

‘Apparently they had launched their jet ski at Salcombe and it had broken down over there, so they were attempting to rescue it and they had phoned the Coastguard to make them aware of their attempt.

‘Naturally when they tried to come back up, they quickly realised the car was stuck fast in the sand and had to abandon the jet ski and enlist the help of some extended family who were with them and some other tourists to push the car back up the beach. 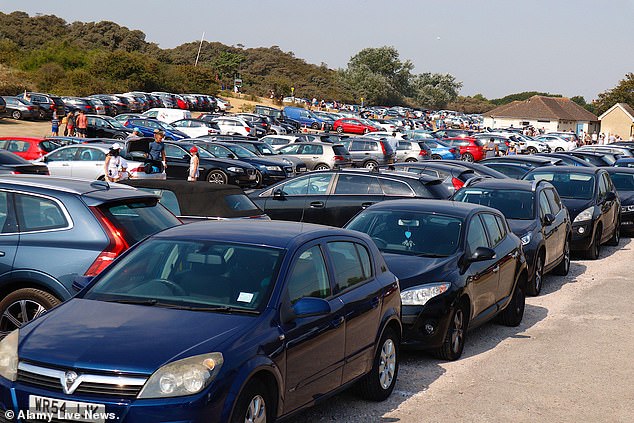 ‘This all took about 30 minutes, during which time some of us on the beach had started to laugh about the situation and take pictures of the car. The family obviously didn’t like this as they proceeded to verbally harass and shout at several people – myself included.

To find out which pubs, hairdressers, leisure activities and other businesses are open again near you, enter your details below. And if you want your business’s details added, sign up here for free.

‘This happened right in front of the local farmer, so they’d shot themselves in the foot in terms of a tractor potentially helping out.

‘The arguments died down after a time, and another two hours later the family had managed to manually haul the jet ski up the beach on its trailer and back onto the public road, proving that they needn’t have used the car to begin with – which must have been annoying for them.’

The vehicle was eventually recovered Pictures from the scene show groups of people on the beach watching the episode unfold.

Another picture shows a Range Rover with a rope attached to the VW, suggesting that it helped pull the stranded vehicle off the beach.

Lates News:
2020-08-12
Previous Post: How coronavirus is affecting Brexit
Next Post: Gavin Williamson says sorry to every student over exams chaos ahead of A Level results day