How do publishers decide when to name people accused of crimes? Why do journalists use the word “allegedly”? And why are some crime reports so pared back while others are full of detail? 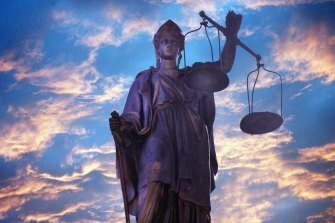 What journalists can publish is closely linked to the law.

If you’ve ever found yourself reading an article in The Sydney Morning Herald or The Age that details a gruesome crime or complicated trial, you might have some questions about the way we cover those events.

Crime reporting can be a legal minefield for journalists and the end result sometimes leaves readers feeling like they’re only getting half the story.

Questions crop up about whether we “protect” complainants and those they’re accusing by hiding their identities, particularly when those in positions of power are accused of crimes such as sexual assault and they have already been identified on social media.

We’re also asked why we use words such as “allegedly”.

How are crime reporters restricted by the law? Why do they include what they include, and leave out what they leave out? And do the rules apply on social media?

Why is the identity of an alleged perpetrator kept secret?

In some cases, a person accused of a crime may not be named in media reports. There are a number of reasons why this may happen, and it is not about “protecting” an accused person.

If no charges have been laid against a person – and, indeed, in some cases charges may never be laid – a news outlet might consider the legal risk of naming them as an alleged perpetrator is unacceptably high. That person might sue a publisher for defamation for suggesting they were guilty of a crime.

In cases where criminal charges have been laid, there may be a suppression order covering the identity of the alleged perpetrator to protect an alleged victim being identified by association (such as if the two people are family members). In some states there is also a legal prohibition on identifying a person accused of sexual offences during the initial stage of their criminal case. These bans may be lifted at a later stage.

Finally, there may be policy or editorial considerations, among other factors, that are weighed in deciding whether to name an alleged perpetrator. In the Brittany Higgins case, which involved an allegation of rape against a former political staffer, not naming the alleged perpetrator focused public discussion on the response of the federal government to the allegations, rather than conducting a media trial into the truth of the allegations.

Why is the identity of a victim kept secret?

As we’ve noted above, there may be cases in which the media is prohibited from identifying a victim of crime. Child victims of crime cannot be identified in news reports in most Australian states.

There is also a prohibition on identifying the complainant in cases involving sexual offences in order to protect their privacy and encourage other complainants to come forward. In stories where complainants are identified, it’s usually because they have consented to being identified. 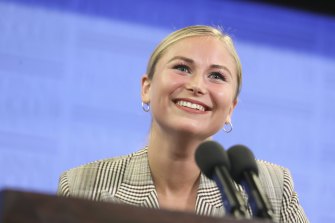 Tasmanian Grace Tame fought for the legal right to identify herself as a rape victim so she could help campaign against the crime.Credit:Alex Ellinghausen

Australian of the Year Grace Tame won a court order in Tasmania in 2019 to identify herself publicly as a child sexual assault survivor. With journalist and sexual assault survivor advocate Nina Funnell and law firm Marque Lawyers, she was the face of the successful #LetHerSpeak campaign to change the law in Tasmania to make it easier for future survivors to tell their stories publicly.

Why do media refer to ‘alleged’ crimes even if the crime seems clear?

One of the fundamental tenets of our legal system is that people are presumed innocent until proven otherwise. In every case involving an allegation that a person has committed a crime, it poses a legal risk to assert they are guilty of that crime before a court has determined their guilt.

A media outlet might run the risk of being sued for defamation – which is a lawsuit seeking damages for publications that harm a person’s reputation – or being in contempt of court by influencing witnesses or people who may end up being on the jury in the case (see more on contempt below).

In crime reports, we make a clear distinction between a fact and an allegation. When a person is found dead, for example, it may be tempting to conclude they were murdered, and it may seem overly cautious to refer to an “alleged” murder. In almost all cases, however, it is not possible to say what crime has been committed until after a trial. There may be a death or even a killing, but was it murder, manslaughter, or neither?

In a recent case, Sydney man Blake Davis stood trial for murder after killing a home invader, Jett McKee, with a samurai sword. Nobody disputed that Davis killed McKee, but the jury found him not guilty of murder and guilty instead of the lesser charge of manslaughter. Murder was indeed alleged, but was not found.

In order to find a person guilty of murder, a judge or jury would need to be satisfied that an accused had intended to kill the victim or inflict grievous bodily harm when they carried out an act causing their death; or they acted with “reckless indifference to human life”; or they caused the death during the commission of another serious crime. They would also need to reject any defences, such as self-defence.

If they are not satisfied the accused committed murder, they may find them guilty of manslaughter, or find them not guilty of this too.

In the #MeToo era, some people may consider that referring to an “alleged” sexual assault implies the complainant’s account is not truthful. The word is used to make it clear that an allegation has been made and it has not been tested in court, not that either party should be believed or disbelieved.

How can we draw the line between facts and allegations?

It’s the job of a reporter to distinguish between verifiable facts and mere allegations. The reason we do this is there may be reasonable grounds to suspect a person has engaged in wrongdoing but it would be risky to go further and imply a person is guilty.

, the distinction was explained in this way: “A man who wants to talk at large about smoke may have to pick his words very carefully if he wants to exclude the suggestion that there is also fire. [Words] can convey a meaning of suspicion short of guilt: but loose talk about suspicion can very easily convey the impression that it is a suspicion that is well founded.”

In order to fulfil our obligation to produce a fair and accurate report of court proceedings, articles are required to include certain information about a case. For example, if the accused is named they must be identified with precision so as not to defame someone with a similar name. Reporters are also required to provide an accurate summary of the charges and report on both the prosecution and defence arguments.

Why do some crime reports include vast detail while others contain only bare facts?

You might have noticed that some reports contain a trove of information relating to an alleged crime, from timelines to photo galleries, while others are pared back to a minimum.

This is because media outlets may publish detailed accounts of a crime until an arrest is made or charges are laid. Then, they’re subject to the law of sub judice contempt, which means literally that a matter is “under a judge”.

Once a matter is “sub judice”, media outlets cannot publish reports that might sway a jury or a witness. This would amount to “interfering in the administration of justice”. The only thing a jury should be considering, when deciding if someone is guilty or not guilty, is what they hear inside the courtroom – not in the media (or on social media). This is why jurors are also told explicitly that they should not search for previous news reports on a case.

If an accused is found guilty after a trial, media reporting is likely to revert to including more detail, including detail that the jury might not have heard in evidence (such as an accused person’s criminal history).

Some criminal trials are presided over by a judge sitting without a jury. In those cases, media outlets have more latitude in what they can report before questions of contempt arise. This is because the law assumes a judge will put media reporting out of his or her mind in deciding a case. An example of this was the Western Australian trial of the so-called Claremont killer, Bradley Edwards, who was sentenced in December to two life terms with a minimum non-parole period of 40 years for the murders of Jane Rimmer and Ciara Glennon in the mid-1990s. Media reporting on this case included details that could not have been aired if it was a jury trial.

Suppression orders aimed at ensuring an accused receives a fair trial will also affect the level of detail in reporting. A total suppression order covered Cardinal George Pell’s trial in Victoria for child sexual abuse offences, meaning it was not reported at all at the time. The High Court subsequently acquitted him of the crimes. The reason for the suppression order was that a second jury trial against Cardinal Pell was contemplated at the time of the first trial, and there were concerns the second jury would be prejudiced by media reporting of the result in the first case. The second trial did not proceed.

The internet poses obstacles to ensuring compliance with suppression orders. After overseas media outlets published detailed reports naming Cardinal Pell and the initial guilty verdict against him, 14 Australian media outlets, including The Age and The Sydney Morning Herald, published and broadcast reports that said a high-profile person had been convicted of a crime.

While the media outlets were careful not to name Cardinal Pell or the charges involved, they were later charged with contempt of court and admitted to a combined 21 charges of breaching the suppression order. Prosecutors argued that although the reports did not name Cardinal Pell, they encouraged readers, viewers and listeners to search online for more information.

If it’s all based on what the law will allow, why do bloggers and social media cover crimes differently?

A blogger or person tweeting from an anonymous account may decide to reveal information that is subject to legal prohibitions and may escape sanction, perhaps because those publications do not come to the attention of the courts. They may also assess that their risk of being sued for defamation is low.

Larger media outlets that report routinely on court proceedings are aware of their legal responsibilities and are also the more likely targets of defamation actions, and their reporting will reflect this.

In some cases, mainstream media outlets will take different approaches to reporting on the same cases. This reflects editorial and legal decisions that have been made behind the scenes. In some cases, there is no one right answer but there will always be an assessment of legal risk and ethical responsibility.

Our Morning Edition newsletter is a curated guide to the most important and interesting stories, analysis and insights. Sign up to The Sydney Morning Herald’s newsletter here, The Age’s here, Brisbane Times’ here, and WAtoday’s here.