The world’s eyes are on the United States as Americans head to the polls to elect their new president.

Republican President Donald Trump is seeking another four years in office. He is up against Democratic challenger and former vice-president Joe Biden.

You can follow our live blog for minute-by-minute updates and also keep track of the live, real-time results from the U.S. election here.

As political developments in the U.S. continue to dominate news headlines, we compile five non-election stories you may have missed on Tuesday.

Police in Austria raided 18 properties and arrested 14 people in a massive manhunt on Tuesday, seeking possible accomplices of a convicted man who shot dead four people and injured 22 others in a late-night rampage in the centre of Vienna.

The gunman, who was killed by police minutes after opening fire on crowded bars on Monday, had been released from jail less than a year ago. He was identified as Kujtim Fejzulai, a 20-year-old Austrian who also held North Macedonian nationality.

Islamic State of Iraq and the Levant (ISIL) claimed responsibility for the deadly attack, in a statement issued through its Amaq News Agency along with a picture and video purporting to show the gunman.

It was the first such militant attack in Vienna in a generation, and the government pledged robust action.

A young girl was rescued from the rubble of a collapsed building in the western Turkish city of Izmir, more than 90 hours after a deadly earthquake killed at least 113 people.

Rescuers heard Ayda Gezgin’s screams from under the rubble and managed to free her hours later, taking her out on a stretcher as emergency teams continued to search five destroyed apartment blocks for survivors.

“She smiled; she was waiting for us,” said Levent Onur, one of the rescue workers pulling Ayda out, adding the child had been stuck behind a washing machine which shielded her from injury. 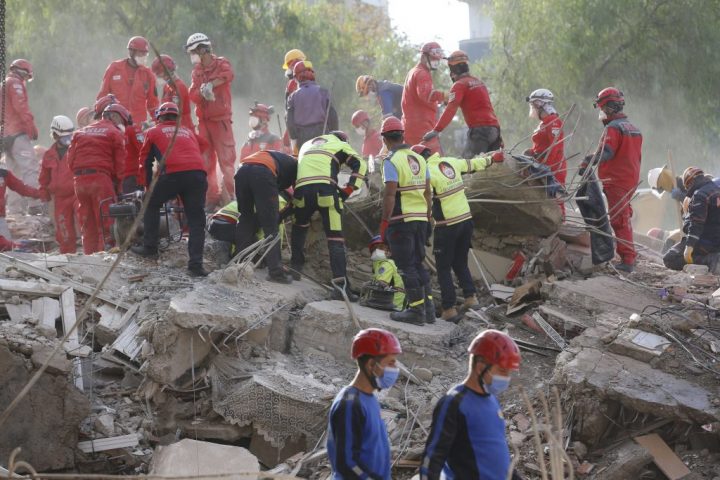 “The name of our miracle after 91 hours is Ayda. Thank God,” tweeted cabinet minister Murat Kurum.

The Interior Ministry later said that Ayda’s mother was found dead by rescuers shortly after her child’s rescue.

Friday’s earthquake in the Aegean Sea was the deadliest to hit Turkey in nearly a decade, with 111 people killed in Izmir and two teenagers on the Greek island of Samos, according to Turkey’s Disaster and Emergency Management Authority (AFAD)

Hurricane Eta, one of the most powerful storms to hit Central America in years, plowed into Nicaragua in an impoverished region of its Caribbean coast, battering homes and infrastructure and threatening deadly floods.

The hurricane had sustained winds of 140 mph (220 km/h), according to the NHC, down from an overnight peak of 150 mph (240 km/h). Even before it made landfall, Honduras reported the first death after a mudslide trapped a 12-year-old girl in San Pedro Sula.

The announcement by Ford was part of a reopening framework unveiled on Tuesday and comes as COVID-19 case counts rise in the province as in much of Canada. But recent modeling out of Ontario suggests the surge will not overwhelm hospital capacity in the country’s most populous province.

About 80 per cent of the new cases were in the hot spots of Toronto and the surrounding regions of Peel, Halton, York and Durham.

The death toll from an attack on Kabul University rose to at least 35, two government sources said, as students protested over the attack and the country marked a day of mourning.

Gunmen barged into the university on Monday, in what was the second attack on an educational institution in the capital in just over a week. Both have been claimed by ISIL.

The two sources told Reuters news agency that most of those killed were students and around 50 more people were wounded, some of them breaking limbs while jumping from windows to flee from the attack during morning classes.

Officially the death toll stands at 22 with 27 wounded, according to the interior ministry.

— With files from Reuters, The Associated Press and the Canadian Press