The European Commission President said the EU will favour buying “proven” alternatives from Pfizer to use as booster jabs across the bloc. As a result, Brussels will now only make purchases of mRNA-based vaccines instead of the traditional technologies used by UK-based AstraZeneca and US Johnson & Johnson. Top eurocrats are furious with the Anglo-Swedish for failing to deliver enough doses to member states.

They have now decided to take revenge by only doing business with partners that Mrs von der Leyen believes have respected their contracts with the bloc.

She told reporters: “To prepare for the future, we are drawing the lessons from the first phase of our answer to the pandemic.

“It is clear that to defeat the virus decisively, we will need to be prepared for the following: At a certain point in time, we might need booster jabs to reinforce and prolong immunity; and if escape-variants occur, we will need to develop vaccines that are adapted to new variants; and we will need them early and in sufficient quantities.

“Having this in mind we need to focus on technologies that have proven their worth. mRNA vaccines are a clear case in point. 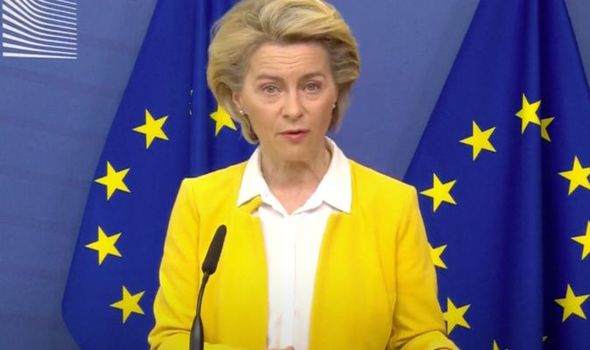 She said this would soon speed up after a sluggish start because of a sudden rush in supplies from Pfizer.

Brussels expects 250 million doses from the American firm to be delivered in the second quarter of the year.

“The COVID-19 pandemic remains a severe threat to people’s health and livelihoods. We are in a race against time,” the Commission chief said.

“The faster we reach our target of having 70 percent of adults in the European Union vaccinated, the better chances we have of containing the virus.

“And the good news is: Vaccination is picking up speed across Europe!

“Member states have received over 126 million doses of vaccines as of yesterday. And I am happy to say that today we have reached 100 million vaccinations in the EU.

“This is a milestone that we can be proud of. Of these 100 million vaccinations, more than a quarter are second doses – which means that we have now more than 27 million people fully vaccinated.”

Her statement follows a decision by the Commission not to renew its contracts with AstraZeneca and Johnson & Johnson.

This means future vaccine purchases, for 2022 and 2023, will use alternative technologies, such as the mRNA used by Pfizer and Modern.

Mrs von der Leyen announced fresh negotiations with Pfizer to buy millions of more doses for the bloc in the coming years.

She said: “Based on all this, we are now entering into a negotiation with BioNTech-Pfizer for a third contract.

“This contract will foresee the delivery of 1.8 billion doses of vaccine over the period of 2021 to 2023. And it will entail that not only the production of the vaccines, but also all essential components, will be based in the EU.

“The negotiations we are launching today – and hope to conclude very rapidly – are a further important step in Europe’s response to the pandemic.”

Her decision means AstraZeneca’s jab will still be used across the bloc but will not be involved in future Commission-led buy-ups.

Member states will be free to opt for the cheaper vaccine in their own private contracts.

Bulgaria has already complained that the EU’s new Pfizer contract will likely cost the bloc more than €19 per dose.