The ‘MacGyvered’ Weapons in Ukraine’s Arsenal

The Ukrainian military has battled Russia with retrofitted equipment, including missiles and rocket systems mounted on trucks and speedboats, experts and officials say. 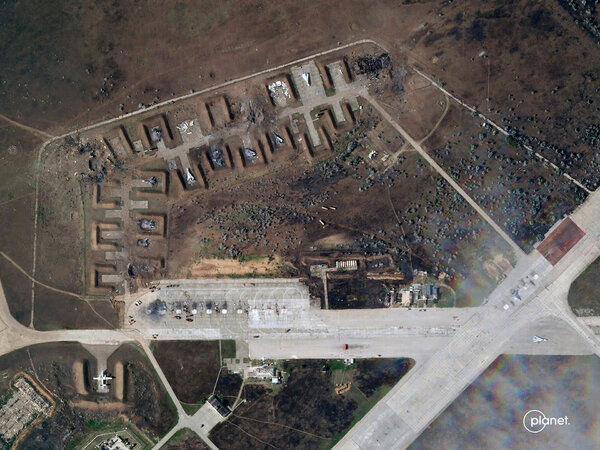 By Helene Cooper and Eric Schmitt

WASHINGTON — The billions of dollars in military aid the United States has sent Ukraine includes some of the most advanced and lethal weapons systems in the world. But Ukraine has also scored big successes in the war by employing the weapons and equipment in unexpected ways, and jury-rigging some on the fly, according to military experts.

From the sinking of the Moskva, Russia’s Black Sea flagship, in April to the attack on a Russian air base in Crimea this month, Ukrainian troops have used American and other weapons in ways few expected, the experts and Defense Department officials say.

By mounting missiles onto trucks, for instance, Ukrainian forces have moved them more quickly into firing range. By putting rocket systems on speedboats, they have increased their naval warfare ability. And to the astonishment of weapons experts, Ukraine has continued to destroy Russian targets with slow-moving Turkish-made Bayraktar attack drones and inexpensive, plastic aircraft modified to drop grenades and other munitions.

“People are using the MacGyver metaphor,” said Frederick B. Hodges, a former top U.S. Army commander in Europe, in a reference to the 1980s TV show in which the title character uses simple, improvised contraptions to get himself out of sticky situations.

After six months of war, the death toll on both sides is high: While American officials estimate that up to 80,000 Russian troops have been killed or wounded, Ukraine’s outgunned military has said it is losing 100 to 200 troops a day. Even so, the engineering ingenuity of the Ukrainians lies in stark contrast to the slow, plodding, doctrinal nature of the Russian advance.

In the attack on the Moskva, for example, the Ukrainians developed their own anti-ship missile, called the Neptune, which they based on the design of an old Soviet anti-ship missile, but with substantially improved range and electronics. They appear to have mounted the Neptune missiles onto one or more trucks, according to one senior American official, and moved them within range of the ship, which was around 75 miles from Odesa. The striking of the Moskva was, in essence, the Neptune’s proof of concept; it was the first time the new Ukrainian weapon was used in an actual war, and it took down Russia’s flagship in the Black Sea.

“With the Moskva, they MacGyvered a very effective anti-ship system that they put on the back of a truck to make it mobile and move it around,” General Hodges, who is now a senior adviser at Human Rights First, said in an interview.

Ukrainian troops have done so well with the Bayraktar drone, in fact, that the company’s chief executive, Haluk Bayraktar, praised their ability to “squeeze as much as possible out of these systems,” in a recent interview with a Ukrainian news program. American military officials remain puzzled by why Russia’s many-layered air defense systems have not been more effective in stopping the drones, which have no self-defense systems, are easily spotted by radar and cruise at only about 80 miles an hour.

A senior Pentagon official said Ukrainian forces had put American-supplied HARM anti-radiation missiles on Soviet-designed MiG-29 fighter jets — something that no air force had ever done. The American HARM missile, designed to seek and destroy Russian air defense radar, is not usually compatible with the MiG-29 or the other fighter jets in Ukraine’s arsenal.

The State of the War

Ukraine managed to rejigger targeting sensors to allow pilots to fire the American missile from their Soviet-era aircraft. “They have actually successfully integrated it,” the senior official told reporters during a Pentagon briefing. He spoke on the condition of anonymity per Biden administration rules.

Officials say the missiles can target Russian air defense systems up to 93 miles away.

The craftiness is now on display in Crimea. In recent weeks, Ukraine has targeted the Black Sea peninsula, which Russia illegally annexed in 2014, in a series of attacks.

In the strike on the Russian air base, Ukrainian forces destroyed eight fighter jets. A few days later, clandestine Ukrainian fighters operating behind enemy lines hit several sites in the occupied territory that Russia had thought were safe, including ammunition depots and supply lines.