“I have never seen a thin person drinking Diet Coke,” Donald Trump tweeted back in 2012. He followed up a week later: “Let’s face it — this stuff just doesn’t work. It makes you hungry.”

Not that this has ever stopped him from drinking oceans of it. Trump likes Diet Coke so much that when he was president, he’d push a red button on a box on his desk, and an aide would appear with a glass on a silver tray. Thank God it was the only red button he pushed.

The addiction hasn’t gone away. What appears to be a bottle of the stuff was seen on his desk in Mar-a-Lago on Monday — despite his calls for a boycott of the soft-drink giant and other companies for their criticism of Georgia’s new voting law. Critics claim the law is designed to disenfranchise Black voters in the Peach State.

Corporate giants are too big to care

“Boycott Major League Baseball, Coca-Cola, Delta Airlines, JPMorgan Chase, ViacomCBS, Citigroup, Cisco, UPS and Merck,” Trump said in a statement Saturday. “Don’t go back to their products until they relent. We can play a better game than them.”

No, Mr. Trump, you probably can’t.

Corporate boycotts make activists feel good, like they’re actually accomplishing something. But such feel-good efforts often don’t work. Want to bring Coca-Cola — a global behemoth with a market value of over $235 billion that sells more than 500 brands in more than 200 countries — to its knees? Good luck with that. Pharmaceutical titan Merck? Sure, stop taking your meds. That’ll show them! 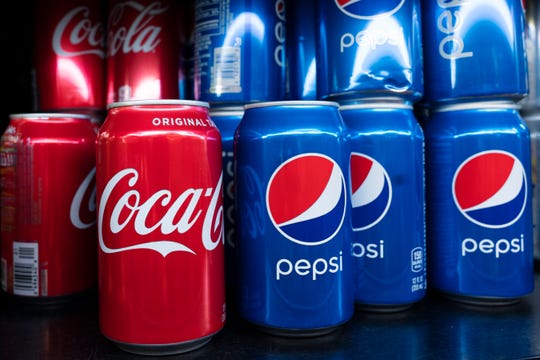 In the past, corporate boycotts used to be (and still are) targeted over things like child labor standards, environmentally damaging practices and the humane treatment of animals. But these days, cancel culture has seeped in as well. Don’t like a bakery’s stance on gay marriage? Boycott. Angry a store doesn’t allow guns on the premises? Boycott.

Republicans are angry at Coke? I heard someone on the radio the other day talk about switching to Pepsi products. Perhaps that person doesn’t know that, for example, like Coke, PepsiCo also doesn’t look favorably on measures to restrict voting rights. Years before the Georgia controversy, both Pepsi and Coca-Cola, for example, severed ties with a conservative organization that supports tougher voter laws and “stand your ground” gun laws.

Stacey Abrams: Corporate America must pick a side on voting rights, prevent a Georgia repeat

These kinds of issues can put companies in a damned-if-you-do, damned-if-you-don’t situation. Trump and his MAGA followers want to boycott Coke now, but two weeks ago, it was Black activists who were urging a boycott of Coke, Delta and others for what one Black church official called their “deafening silence” on voting rights.

“If Coca-Cola wants Black and brown people to drink their product, then they must speak up when our rights, our lives and our very democracy as we know it is under attack,” said Bishop Reginald Jackson.

Big corporations spend gobs of money on consumer research and marketing and know their customers, employees and shareholders better than anyone. When they make a decision, these constituencies are always top of mind. Coke didn’t cave, as Trump and others claim. They’re just doing what Trump has always done himself: determining what’s best for business and acting accordingly.

But while giant global corporations aren’t likely to be dented by a boycott campaign, smaller targets can be. Few know this better than Tucker Carlson, whose primetime Fox News show lost big-name advertisers like T-Mobile and Disney last year after Carlson trashed the Black Lives Matter movement.

Less prestigious sponsors filled the gap, though perhaps not paying the same rates. Yet for numerous reasons, how much financial damage this has actually done is questionable, notes Variety media analyst Brian Steinberg.

Corporations would prefer not to get dragged into such messiness in the first place, of course. As Daniel Diermeier writes in the Harvard Business Review, “being in a political dog-fight is rarely good for a company’s reputation. The public debate is likely to create intense media coverage. And it may lead to severe internal tensions among employees who may ask themselves whether the company is still a welcoming place to work.”

Then there is what I call the Isaac Newton principle. In this hyperpartisan age, when just about everything is grounds for dispute, anyone waging a boycott campaign against a company might want to consider that their actions could have an equal and opposite reaction. Some citizens may decide that they agree with a company’s stance on a particular issue and support them with business they might not have given before.

Boycotts? Good luck, Mr. Trump. Meanwhile, why not crack open a nice, refreshing Diet Coke? You know you want to.

Paul Brandus is the founder and White House bureau chief of West Wing Reports and a member of USA TODAY’s Board of Contributors. His latest book is “Jackie: Her Transformation from First Lady to Jackie O.” Follow him on Twitter: @WestWingReport