A super PAC supporting Pete Buttigieg is following through on the campaign’s signal that the former South Bend, Indiana, mayor would benefit from advertising in Nevada about his military experience.

VoteVets, a super PAC that supports military veterans in politics that has thrown its support behind Buttigieg, has bought more than $500,000 in television advertising in Nevada, The New York Times reported. VoteVets did not respond to a request for comment.

The buy comes one week after Michael Halle, a strategist on the Buttigieg campaign, tweeted publicly that it was “critical” Buttigieg’s military experience was touted “on the air through the caucus” in Nevada, which is Feb. 22.

The tweet was seen as an attempt to skirt federal anti-coordination rules that prevent campaigns from sharing strategy and messaging with outside groups — a rule that has become much fuzzier as the role of social media grows in politics. While campaign finance rules do not allow direct communication between campaigns and super PACS, there’s an exception: “if the information material to the creation, production, or distribution of the communication was obtained from a publicly available source,” the Federal Election Commission states.

In other words, using Twitter to send a signal to a super PAC is legal. Buttigieg’s campaign didn’t deny that this was their strategy, telling Politico, “If the largest progressive veterans group wants to help spread the word about his service, we welcome it.” 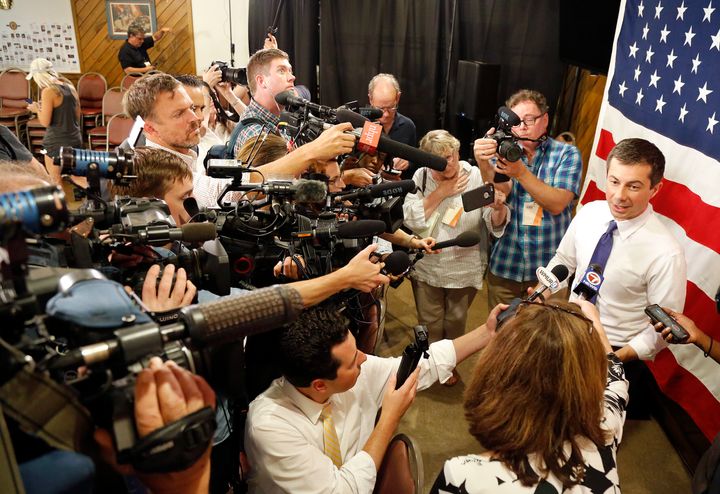 Buttigieg is currently polling around 10% in Nevada, behind Sen. Bernie Sanders (I-Vt.), former Vice President Joe Biden and Sen. Elizabeth Warren (D-Mass.), according to the FiveThirtyEight polling average. After coming ahead of Sanders in the delegate count out of Iowa, and in a close second place in New Hampshire, Nevada is the first time Buttigieg will have to contend for the support of a much more diverse base of voters.

VoteVets poured more than $1 million into the New Hampshire primary alone, in support of Buttigieg.

Interestingly, Buttigieg, who dissolved his own super PAC, Hitting Home PAC, last May, has hit other campaigns for accepting independent expenditures from outside groups.

“We can’t fall behind on our fundraising efforts when Bernie Sanders’ dark money groups are stockpiling hundreds of thousands of dollars,” the email read.

Buttigieg’s campaign was referring to nine outside groups — including the Sunrise Movement, Center for Popular Democracy Action, and Our Revolution — that announced they were banding together as an independent expenditure in support of Sanders.

That group, “People Power for Bernie,” will also not be allowed to coordinate with the Vermont senator’s campaign.