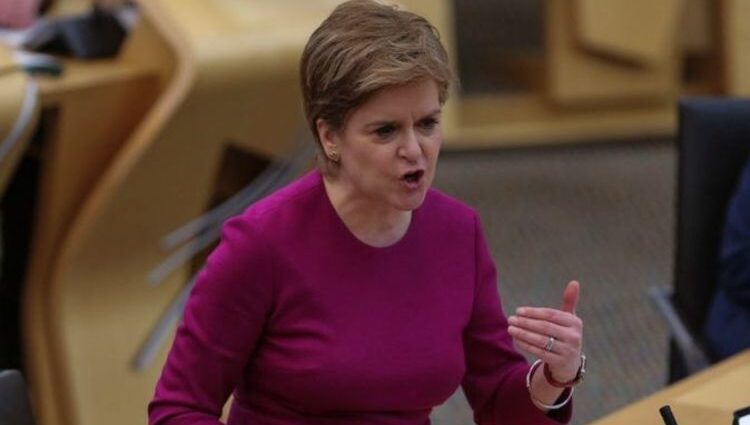 Anas Sarwar hits out at Sturgeon over offshore wind plots

The SNP leader and her fellow Holyrood ministers were castigated for the delays – which have lagged far behind Boris Johnson’s in England. All Plan B Covid restrictions ended in England on Thursday – including the requirement to wear facemasks inside.

But the First Minister has clung on to her’s despite a senior Scottish Government adviser vowing that the “day is coming” when rules will end.

National clinical director Jason Leitch suggested secondary pupils will soon no longer have to wear face coverings in class, but was unable to say exactly when curbs will be lifted.

The Scottish Tories said it was now “clear” that even the SNP Government’s own experts believe the change must be examined and questioned why ministers were “so reluctant”.

Scottish Conservative health spokesman Sandesh Gulhane said: “The SNP must stop dragging their heels on this and end this restriction as soon as possible.

“Face masks have a negative impact on learning, especially for those children with extra needs, and, after two years of disruptions caused by the pandemic, pupils, teachers and parents want some normality restored to education.

“But once again, we’re witnessing a government that’s too quick to impose harsh restrictions and too slow to ease them.”

Parents have also insisted that Scottish pupils should not be left behind, the Scottish Daily Express reported.

The National Parent Forum of Scotland and health expert Dr Christine Tait-Burkard both called for the rule to be scrapped in schools earlier this week.

He said: “They’ll give us advice to remove them when they think it’s appropriate and I think that day is coming.”

But he said that restrictions such as working from home and face coverings should be removed gradually, saying: “We’ve learned removing the plaster all at once goes badly.”

He added: “I think we have de-fanged the virus to some extent, and I think these things will in time go.”

Lates News:
2022-01-21
Previous Post: This Country Has the Lowest Cost of Living
Next Post: Bitcoin Falls Below $38.5k as More than $860 Million Gets Liquidated Amid Mass Sell-off