Home Secretary Priti Patel hit out at First Minister Nicola Sturgeon over her pledge to confront the Home Office on the attempted removal of two men from Glasgow two weeks ago. Immigration officers were prevented from detaining two men as a crowd of demonstrators assembled around their van until the two men were released. Ms Sturgeon condemned the raid as “unacceptable”.

Asked whether she will be confronting the First Minister for her comments, Ms Patel told Sky News: “I think it’s an absolutely state of affairs that we see the nationalists in Scotland basically trying to thwart the safety and security of the British public but also trying to prevent the Government from trying to remove those with no legal basis to be in the United Kingdom.”

She continued: “The point about our immigration policy…immigration is a reserved matter for the Government here.

“And quite frankly, it’s pretty clear that when it comes to the nationalists in Scotland, they would much rather have an immigration policy of open borders, no checks when it comes to criminals coming into the UK and no border control.

“I think her comments reflect upon the nationalists’ position when it comes to removing people that have no legal basis to be in the UK.

JUST IN: Grow up EU! Brussels carrying out unnecessary checks on Sainsbury’s food 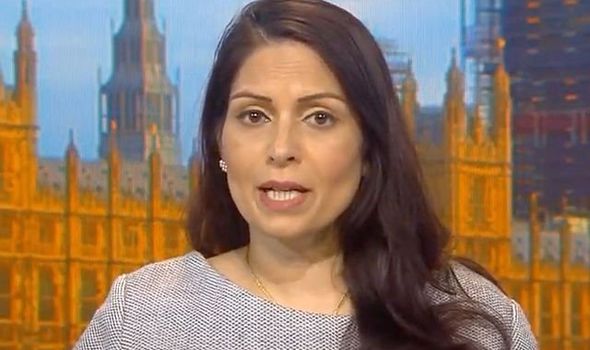 “This has nothing to do with Eid, at all. Immigration officials were absolutely doing their job in terms of removing people with no legal basis to be in the UK.”

In a series of tweets published following the attempted raid, Ms Sturgeon said: “The Home Office needs to ask itself hard questions after today,” she said in a later tweet.

“Doing this on Eid, in the heart of Muslim community, and in the midst of a serious Covid outbreak was staggeringly irresponsible – but the even deeper problem is an appalling asylum & immigration policy,” she said.