With bright red and white stripes across his body and stars down his sleeves, the man in the American flag jacket and “FLORIDA FOR TRUMP” hat wielded a fire extinguisher while charging the U.S. Capitol on the afternoon of Jan. 6. He shoved his way through the crowd of rioters to the police line, then sprayed officers at close range before chucking the emptied canister at them. By nightfall he himself had been lightly harmed, apparently by a police crowd control munition. He held up his shirt to show off his bruised gut during an interview with a female journalist filming him live as cops pushed the mob back from Capitol grounds. Then he looked straight into her livestreaming device and identified himself as Robert Palmer from Clearwater, Florida.

At this point, the man had not only assaulted federal officers before a sea of smartphones while wearing highly distinctive attire, he’d also willingly revealed his own name and hometown on video at the scene of the crime — while still in the same outfit.

This isn’t your typical “Florida Man” story, despite its absurdity. This is the story of a violent insurrectionist who’s still at large — nearly two months later — and one woman who joined the online sleuthing communities crowdsourcing their efforts to bring a Capitol attacker to justice.

Robert Scott Palmer is a white 53-year-old husband and father who runs Son Bright Systems, a cleaning and restoration business. His criminal record includes being sentenced on charges of battery and felony fraud.

HuffPost verified his identity through a search of public records and social media accounts associated with Palmer, after receiving a tip from Amy, a woman living in a rural area out west who in her free time joined the #SeditionHunters network, an online sleuthing community seeking to identify the hundreds of Trump supporters who rioted at the Capitol. (Amy is a pseudonym she chose to protect her privacy.)

Reached by phone late Thursday afternoon, Palmer confirmed he was at the Capitol on Jan. 6 and gave the livestream interview. He claimed that he’d done nothing to justify being struck with the police munition, and that the Biden administration was trying to “vilify the patriots” who were involved in the riot.

“I’m just going about it and letting them make the mistakes that they want and ruin the country as they want, and I’m just trying to live my life right now,” he said, adding that the jacket he wore “wasn’t anything I had made special — [I] just bought it in a store.”

Palmer seemed to grow increasingly anxious as the call continued.

“I’m just going to just leave it like that. I’m not getting myself any — not deeper, ’cause I didn’t do anything wrong — but I’m not involving myself anymore,” he said. He hung up when HuffPost asked him about the fire extinguisher.

While Palmer was storming the Capitol in January, Amy was home sick, thousands of miles away. She had contracted COVID-19 and was getting restless while recovering in isolation. After watching in horror as the insurrection unfolded, she decided to use some of her time in quarantine poring over footage from the attack and trying to track down rioters. Using the Twitter handle @CountryOvParty, she worked with the group @capitolhunters as they tried to mine through a seemingly endless flow of photos and videos, assigning catchy hashtags to various persons of interest to bring some order to the chaos.

“The more that I watched [from the insurrection] the more that I felt like I had lost control over what this country was supposed to be,” said Amy, who is a federal employee. “Spending that time searching was a way to regain control of the situation for me.”

The FBI is still hunting down the insurrectionists who flooded the Capitol because they believed former President Donald Trump’s false claims about mass voter fraud and supported his efforts to overturn the results of the 2020 presidential election. It’s a monumental task. The unprecedented investigation involves hundreds of suspects, hundreds of thousands of tips and millions of pieces of evidence. Keeping it organized and figuring out which suspects the bureau should prioritize is an overwhelming logistical nightmare that few entities ― even the nation’s premier law enforcement organization ― are equipped to handle.

The FBI needs the public’s help, and plenty of citizen sleuths are ready to pitch in. But as their investigations move at internet speed, some members of the crowdsourced effort are getting a bit flustered when they send in solid tips, don’t hear anything back from the bureau, and have to wonder whether the information they provided got into the right hands.

The FBI does not typically offer comments about ongoing investigations into specific individuals, and the bureau did not do so here.

Amy was among those who wanted to help out. At first, she focused on the man later identified as Robert Sanford, a retired firefighter from outside of Philadelphia who also tossed another fire extinguisher at three cops. He was wearing a “CFD” hat, so Amy went about researching fire departments in cities that start with the letter “C.”

“I spent hours searching through C-named fire departments throughout the country, primarily in the east or Northeast or Midwest, because where would you need a ski cap?” she said. Soon, other online sleuths helped identify Sanford, who had retired last year from the Chester Fire Department in Pennsylvania. He was arrested in mid-January and now faces five federal charges, including civil disorder and assaulting officers using a dangerous weapon.

Amy kept going. She went through every single clip pulled from the right-wing social media website Parler, which were posted and published by ProPublica. She kept going through videos and photos of the attack. Soon #FloridaFlagJacket drew Amy’s attention. “I got locked onto this guy and the jacket, because the jacket is so unique,” she recalled.

Palmer wasn’t very incognito. His already distinctive jacket was embroidered with “TRUMP” on the front and back, and his “FLORIDA FOR TRUMP” hat offered a pretty strong hint about his home state. He was wearing a “MASKING UNDER PROTEST” mask, a unique item that Amy learned was sold on a “Patriot’s Cave” website and can be found on another site called “American Patriot Depot.”

The pieces were starting to come together. When someone else in the sleuthing community found a video of Palmer later that night, it was the final straw.

“Someone else found the YouTube clip where he said his name, and that was the dealbreaker,” she said. She sent in another tip to the FBI. 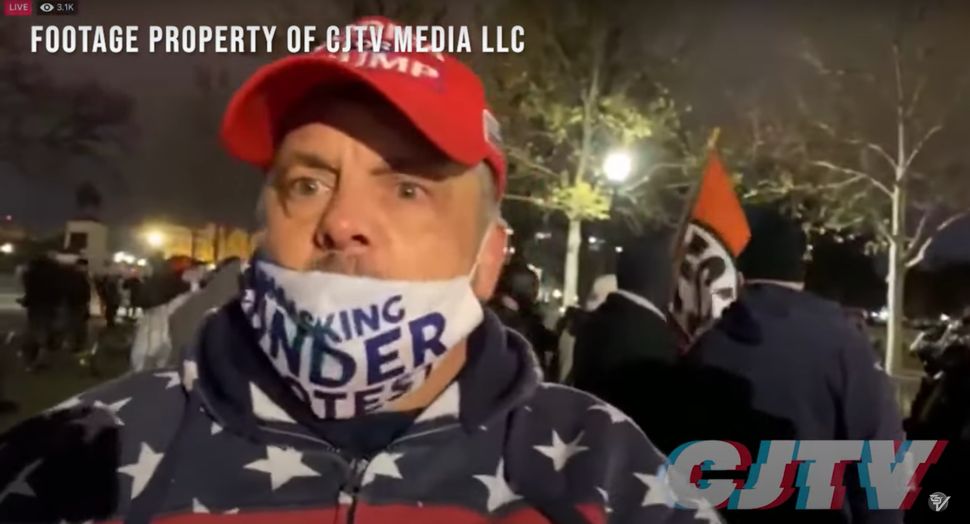 Palmer is now publicly on the FBI’s radar, though not by name. Three photos of him are featured on the bureau’s Capitol violence page, where he’s listed only as “#246 – AFO [Assault on Federal Officer].” But the images didn’t appear there until nearly a month after Amy had already tipped off the FBI about his identity. 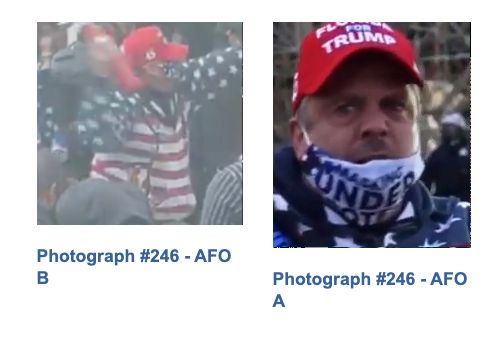 #FloridaFlagJacket was used as a hashtag on Twitter less than a week after the Capitol attack, when Trump was still in office. Amy sent in a tip naming Palmer not long after President Joe Biden was inaugurated. His photos were finally added to the FBI database in late February.

In the week since HuffPost published a story identifying 38-year-old Daniel Joseph Rodriguez from Fontana, California, as the MAGA-hatted insurrectionist who tasered a D.C. cop, we’ve been flooded with additional tips from individuals who contacted the FBI with solid information and are wondering what happened to their tips.

When they don’t hear back from the bureau, tipsters can feel like they just tossed their tip down a well, like it got buried in a massive pile of more than 270,000 tips received from the public. They don’t know if anyone is on the other side, or what action ― if any ― is happening behind the scenes. It’s a feeling familiar to anyone who’s ever applied for a job online.

Tipsters realize the bureau is overwhelmed. But the radio silence can still be frustrating, especially when it involves a suspect who used violence against police officers at the Capitol in a riot during which one officer died and dozens of others were injured.

“One of the downsides is you don’t know if anybody ever sees what you sent,” Amy said. But she acknowledged the enormous sea of information the bureau is trying to sort through. “If I was on the other end getting those tips, I’d be frustrated,” she added.

As she’s poked around online looking for insurrectionists, Amy has seen how they were radicalized online. She thinks that the COVID-related lockdowns had a massive impact sending people down the paths of conspiracy theories.

“If you go to their Facebook posts [from] before a year ago, there were pictures of them fishing and camping and, you know, going to Disney World,” Amy said. “But in the last year, their posts became more and more only about politics. Less pictures of family.”

On Palmer’s Facebook page, he proudly displays his love for Trump and embrace of Trump’s voter fraud conspiracy theories. It’s littered with posts spreading false information about Biden’s election, denigrating the Black Lives Matter movement and downplaying the need for COVID-19 safety protocols. A video Palmer uploaded in December appears to show him cheering on a parade of Proud Boys marching down the street in D.C.

After the Capitol attack, Palmer posted a clip of Bill O’Reilly suggesting that Trump wasn’t responsible for inciting the violence at the Capitol, which Palmer, of course, took part in. He posted a Dan Bongino video complaining about Parler going down. And his experience at the Capitol didn’t dissuade him from his beliefs that the election was stolen.

“Sad thing is to think of the sacrifice that our men and women in uniform have made is now all in vain,” he posted on the day of Biden’s inauguration. “Death is come [sic] to the Republic.”

When HuffPost informed Amy that Palmer had admitted over the phone that he was the man in the American flag outfit seen in the livestream interview, she said the fact that he hadn’t realized the FBI was looking for him showed just how fractured the media environment had become.

“He’s FBI #246-AFO, and not only does he not know it, but no one in his circle knows it,” she said. “You’ve got to think people that know him know he was there. And he’s got a wound, do they really think he got that wound from doing nothing?”

Getting an admission from Palmer confirming his identity and his presence at the riot in a Trump American flag jacket is the kind of news Amy was waiting for. “It sure is satisfying to have some closure on it,” Amy said.

“You go through that and say, ‘Is this stupid?’ ‘Am I wasting my time?’ and whatnot,” Amy said. “Then you get another tidbit or another photo. You have just enough crumbs and eventually you get a piece of candy, and you just keep going.”

Now Amy, whose COVID-19 symptoms have gone away, is just waiting for another notification: one that lets her know the FBI finally came knocking on Palmer’s door.

“I will probably open a bottle of champagne,” Amy said. “Which I can enjoy now, since I can taste.”