Rosemary Becchi is exactly who the Republican Party says it’s looking for.

Becchi (pronounced “Becky”) is running for one of the House seats Democrats snapped up in the blue wave of 2018 and that Republicans are eager to snatch back in 2020. She is a white-collar professional and a mother of three in a wealthy, white suburb where a lot of swing voters share her same background — the kind of woman Republicans say they are desperate to recruit, to speak to the voters they are desperate to win back.

But when Becchi met with a party official at National Republican Congressional Committee headquarters in Washington, he asked her not to run.

NRCC officials already preferred another Republican in her New Jersey district, he said: Tom Kean Jr., the son of that state’s popular former governor from the ’80s.

“One of the first things they said to me was, ‘Why don’t you run in a different district?’” Becchi fumed in a recent interview. “Well, guess what? I don’t live in another district.”

This is a time when the GOP supposedly wants more Becchis. In 2018, the forces that made the midterms the Year of the Woman for the Democrats spelled total catastrophe for Republicans. White, suburban women with college degrees fled the party in droves. The bloodletting left only 13 Republican women in the House, a number so low that Mitch McConnell (R), the Senate majority leader and no one’s idea of an equality champion, promised to do “a better job of recruiting women candidates and getting them elected.”

There’s no shortage of theories about what has to change and of big money in search of solutions. This cycle, the party is reportedly on track to recruit more women than ever to run for office, and a few donors have poured millions into a new super PAC, Winning for Women, which hopes to ferry those recruits through the primaries.

Becchi’s clash with the party, though, cuts to a more elemental problem: If Republicans want to elect more women, they’ll have to elect fewer men.

“To actually make a difference,” said Cam Savage, one of a handful of Republican strategists trying seriously to elect more women, “people are going to have to go out and steal some seats.” 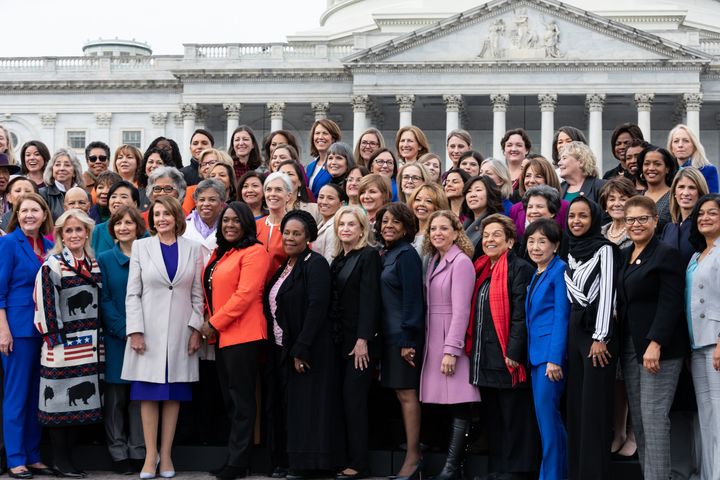 Becchi is running in her home district anyway, where she’s a perfectly plausible candidate. New Jersey’s 7th Congressional District is mansionland, with lots of polite, wealthy, white people whose top political concerns include taxes and paying less of them. Becchi is a talented tax attorney and lobbyist with an impressive list of corporate clients. She was also, in her long-ago stint as a Senate policy staffer, a co-author of the federal 529 plan — a tax-advantaged college savings plan loved by well-to-do families like the ones who live in her district.

Becchi’s various personal causes — boosting Republican candidates and running an anti-tax group, a trade association and a variety of groups promoting Republican women — have given her easy entree into the regional Republican elite.

But Kean Jr.’s ties to those circles run deeper. He’s the state Senate minority leader. He ran his first race for Congress 20 years ago (he lost), and his personal driver on his 2006 U.S. Senate campaign is now the NRCC’s political director. (He lost that race, too.)

The party’s steamrolling of Becchi has not been subtle. Local Republicans convinced Becchi to delay her announcement by telling her she would distract from this summer’s legislative primaries. She later spotted local officials attending Kean Jr.’s much earlier campaign kickoff. Before she could follow him into the race, the NRCC took the unusual step of circulating poll results that showed Kean Jr. leading the sitting Democrat, freshman Rep. Tom Malinowski, in a general-election matchup. And soon after Becchi declared, U.S. House Minority Leader Kevin McCarthy (Calif.) gave Kean Jr. his endorsement.

He added, “I strongly believe we must provide resources in support of female candidates early and often ― we cannot afford to wait until after the primaries. Doing so will ensure our candidates a level playing field to compete on in the general election.”

In response to a request for comment, the NRCC claimed it does not play in primaries.

Becchi has her own friends. GOP strategist Julie Conway, the grande dame of efforts to elect more Republican women, is helping Becchi make connections and is freely critical of the rush to crown Kean Jr.

“She’s a great candidate,” Conway said. (The PAC Conway leads, Value In Electing Women, has neither endorsed Becchi nor ruled it out.) “Her father wasn’t the former governor of New Jersey. … But she is a super strong intelligent woman whose wheelhouse is taxes, the economy. Everybody is jumping on the Kean bandwagon because it’s his turn.” 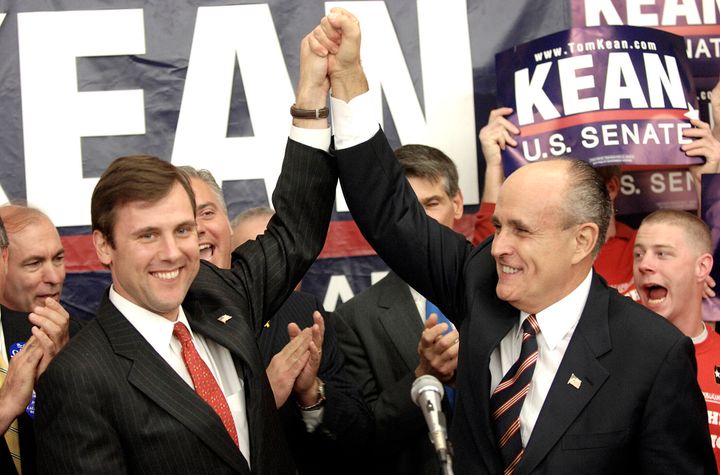 Candy Straight, a fellow New Jerseyan and longtime Republican fundraiser who helped found Winning for Women, is helping her cultivate donors, and former Rep. Barbara Comstock (R-Va.) calls regularly to offer advice. Maggie’s List, a Republican PAC that supports women, has endorsed Becchi, and Winning for Women has Becchi on its list of potential beneficiaries.

All those supporters are part of a small group of Republican insiders trying seriously to elect more women. Reps. Elise Stefanik (N.Y.) and Susan Brooks (Ind.), who is retiring from the House, have recruited scores of women between them to run for Congress. Conway has matched nearly every woman who’s running with a Republican woman in the House or a former member who can act as a kind of mentor.

But they can only do so much on their own. Without the help of the rest of the party — which has shown time and again that gender parity is not its priority — most of their recruits have foundered in the primaries.

Take Joan Perry. This summer, Winning for Women, VIEW PAC and all 13 Republican women in the House coalesced around Perry, a doctor, in a special election for an open seat in North Carolina. Perry received financial support from just four House Republican men. Although she cleared the 17-way primary, Perry lost by 20 percentage points in the runoff.

Or take Carla Nelson, a Minnesota state senator who ran for an open House seat in 2018. Stefanik recruited Nelson but stopped short of supporting her candidacy because the party discourages House members from influencing the primaries. Rep. Tom Emmer (Minn.), though, dispatched his chief of staff to Minnesota to run her opponent’s campaign. (Emmer is now head of the NRCC —a position he obtained after McCarthy asked a more experienced woman to step aside. He did not reply to a request for comment.) On primary day, Nelson got trounced.

“I was crushed at the loss for several months,” Nelson said. “The good ol’ boys club still exists.”

Often, even the small universe of people who are serious about electing more Republican women finds itself divided.

That was the case with Ashley Nickloes, a self-assured Air National Guard pilot with multiple deployments who ran for an open, Republican-leaning seat in Tennessee. The front-runner, Tim Burchett, had an extremely goofy resume — the highlights included a bill to let drivers eat their roadkill. But as Knox County mayor, he monopolized the local donor class, who told Nickloes they feared supporting her would bring his “retribution.”

Nickloes made her case to Winning for Women: Yes, she was a long shot, but she was peeling away Burchett voters with surprising ease, and the Knoxville media market was cheap.

Winning for Women endorsed Nickloes in May but spent just $27,185 — on a series of online ads which ran six days before her primary — to help her.

“What they failed to see, was they really could have made a huge difference if they had come in as soon as I hit the ground,” Nickloes said. “By the time they really did believe, ‘Wow, she’s got this, she could really do a great job,’ we were way behind the power curve.” She finished a distant second.

None of these women were perfect, from a party standpoint. Nelson’s opponent was dating the head of the Minnesota GOP. Nickloes deployed with the military in the middle of her race, which forced her to suspend her campaign. Becchi, Perry and Nickloes are all first-time candidates and have diminishing public policy experience in that order. They reflect the fact that the congressional feeder system — state politics — is dominated, especially on the Republican side, by men: Nationwide, women occupy just 17% of the 3,844 state legislative seats and 22% of the 185 statewide offices controlled by Republicans.

The counterargument goes that Republicans have to start somewhere.

“There are a lot of people who talk about the need for parity and how Congress needs to elect more women, and talk about the difficulty of doing it, without actually doing something about it,” Conway said.

In 2018, VIEW PAC went all-in for 10 women who lost their primaries in districts where Republicans went on to win in the general election. “Had anybody helped them,” Conway said, “they’d be sitting in Congress right now.”

Conway and like-minded Republicans believe they need to elect more women for the long-term health of the party.

Said Conway, “I think we have a really solid opportunity to pick up a number of the seats we lost with female candidates.”

The idea is that female candidates can win back the white, educated women in the suburbs who turned away from Republicans in 2018. Polls found those voters switched loyalties largely because of their displeasure with President Donald Trump. Now that Trump has only become more synonymous with the Republican Party — the Trump National Golf Club in Bedminster, known also as the “summer White House,” is actually in Malinowski’s district — a cynic might say that women present one of the few ready options for laundering the party’s reputation.

The Republican Party is generally on board for the easy part. McCarthy has donated to five women from his leadership PAC. None of them has formidable primary competition, but all of them are running in high-stakes districts that Democrats took from Republicans in 2018. McCarthy has also introduced Winning for Women executives to his deep-pocketed donors.

Stefanik has one additional, trickier job, Conway said: “Elise’s job this cycle is to help get the guys on board.”