The economic recovery measure Republicans presented on Tuesday is a fraction of the size of their original offer and was immediately dismissed by Democrats as inadequate. 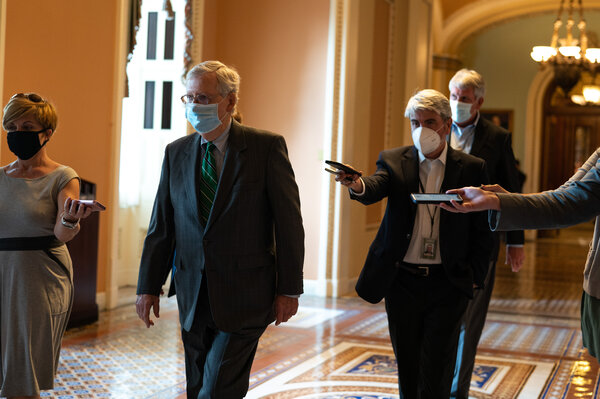 WASHINGTON — Senate Republicans on Tuesday proposed a substantially scaled-back stimulus plan to provide federal aid to unemployed workers, schools, farmers, the Postal Service and small businesses, announcing a vote this week whose primary purpose was to try to foist blame on Democrats for a continuing stalemate.

Senator Mitch McConnell of Kentucky, the majority leader, presented the measure as senators returned to Washington after a summer break that saw no progress in talks between top Democrats and White House officials on a recovery package to address the pandemic and the recession. The legislation — immediately rejected by Democrats as an inadequate response to the crisis — slashes by hundreds of billions of dollars the $1 trillion proposal Republicans had initially offered in negotiations, and is a fraction of the $2.2 trillion Democrats have said is necessary.

But Mr. McConnell, who has struggled to navigate divisions within his party over the scope of any additional federal aid, made it clear that he would force action on the doomed package, if only to escalate political pressure on Democrats to accept a much smaller plan than they have been willing to agree to.

“I will make sure every Senate Democrat who has said they’d like to reach an agreement gets the opportunity to walk the walk,” he said on Tuesday.

The bill is likely to fail on a test vote planned for Thursday — it would need 60 votes to advance — with Democrats opposed and the potential for some Republican defections. Even before Republicans released the bill text, Speaker Nancy Pelosi of California and Senator Chuck Schumer of New York, the minority leader, declared that it was “laden with poison pills Republicans know Democrats would never support.”

The impasse amounts to a fraught political situation for both parties less than two months before the November election, with millions still unemployed and the pandemic continuing to spread with no promise of relief from Congress. Since lawmakers left Washington in early August, millions of Americans have filed new unemployment claims, wildfires and devastating storms have ravaged the country, schools have struggled to safely reopen and states have begun carrying out a series of budget cuts to remain solvent.

And Congress must soon confront the annual lapse in government funding at the end of the month, though both lawmakers and administration officials have voiced support for a stopgap bill that would keep the government functioning through the November election.